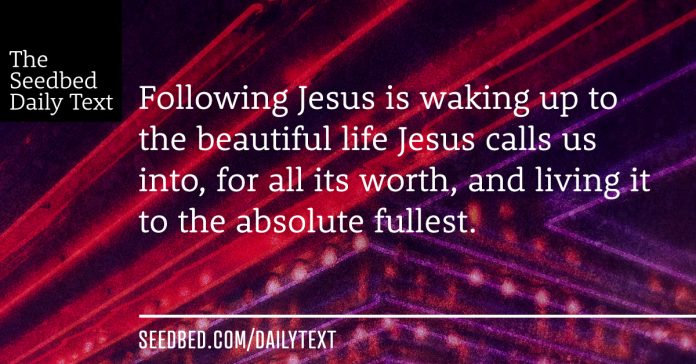 Paul, called to be an apostle of Christ Jesus by the will of God, and our brother Sosthenes,

To the church of God in Corinth, to those sanctified in Christ Jesus and called to be his holy people, together with all those everywhere who call on the name of our Lord Jesus Christ—their Lord and ours:

Grace and peace to you from God our Father and the Lord Jesus Christ.

O.K., so a lot happens in Corinth. And, no, it doesn’t stay in Corinth. In fact, what happened in Corinth has made it all the way to your city, your home, your email inbox, or podcast feed. Welcome to this Daily Text series exploring God’s Word to the ancient Corinthians, and the present-day Americans, and Kenyans, and Russians, and Brazilians, and Mexicans, and Australians, and Italians, and Ukranians, and Haitians, and [your country here].

Words create worlds. Words redeem worlds. And words recreate worlds. In the beginning, God spoke words and created the world. It was the satanic confusion of God’s word that led to the fall of humanity. In the fullness of time, God sent his son, the Word made flesh, to redeem the world.

We think of the Apostle Paul as planting churches, making disciples, traveling and otherwise suffering in jail for the sake of the gospel as his primary ministry. While this is true, the far greater impact of Paul’s mission and ministry has to do with the way he put words together into letters to the first century churches across the land. Most all of Paul’s letters were written to solve problems and restore order in the lives of men and women in these communities who were in the process of being saved by the grace of God in Jesus Christ.

Paul’s words worked (and work) in the power of the Holy Spirit to restructure and recreate the worlds in which these people lived by bringing the wisdom of the gospel to bear on their lives and relationships. We begin today with one of these letters; Paul’s letter to the church at Corinth. Over the course of the next ten weeks or so we will become familiar with the ancient city of Corinth, its people and the way disciples get made in confusing cultures. In some ways the ancient Corinthian culture will feel much like our own.

To get started I want to point out Paul’s foundational assumption in his work. Look for the common word here:

Paul, called to be an apostle of Christ Jesus by the will of God, and our brother Sosthenes,

To the church of God in Corinth, to those sanctified in Christ Jesus and called to be his holy people, together with all those everywhere who call on the name of our Lord Jesus Christ—their Lord and ours:

The word? “Called.” Paul is called and the people who make up the church in Corinth are called. This letter (and all of Paul’s letters) are written within this overarching framework and mindset. What does this mean for people to be “called”? It means a really amazing kind of different.

Paul is writing to the church in Corinth as though they had forgotten their core calling. He is not willing to let them “phone it in.” He is reminding them they are “called,” to be holy—to be set apart—not some kind of “religious” organization but a group of people who are living out their lives in an “amazing kind of different” fashion. He knows they don’t seem to get this at all, but it doesn’t change the way he approaches them. He refuses to consider them as anything other than “called.”

Paul is not willing to create a category for people in the church who are just kind of there hanging out or who show up every now and then and throw a five in the offering plate. That’s just not what the church is. As we will soon see, Paul’s letter will quickly get to the business of re-calling the called to their calling.

It’s about becoming an amazing kind of different; not about being better than anyone else—just waking up to the beautiful life Jesus “calls” us into, for all its worth, and living it to the absolute fullest.

Our Father in Heaven, thank you for the way you winged your Word into the heart of the ancient city of Corinth; for the way you raised up a band of believers there and called them to become holy, to embrace the amazing kind of different life of Jesus Christ in the power of the Holy Spirit. Thank you for the way your are now winging your Word into my city, my church, my home, and my heart. Enlarge my heart, Lord, and stretch my capacity for your presence, break me from the inside out, so I might somehow contain the uncontainable gift of yourself. In Jesus name, Amen.

How might we develop a richer idea of what called to be “holy” actually means? Rather than all the “holier-than-thou” images that come to mind, what if we could categorize our calling to follow Jesus in a distinctively winsome fashion?