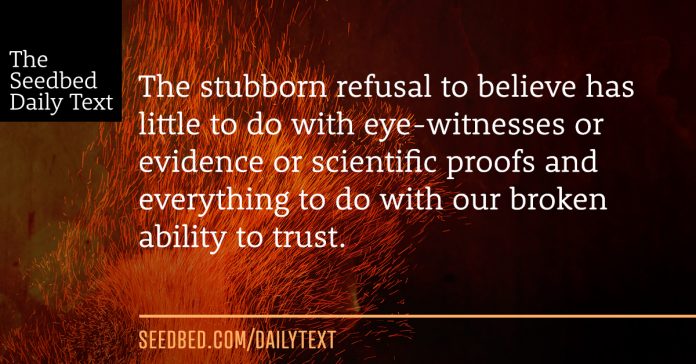 Later Jesus appeared to the Eleven as they were eating; he rebuked them for their lack of faith and their stubborn refusal to believe those who had seen him after he had risen.

He said to them, “Go into all the world and preach the gospel to all creation. Whoever believes and is baptized will be saved, but whoever does not believe will be condemned. And these signs will accompany those who believe: In my name they will drive out demons; they will speak in new tongues; they will pick up snakes with their hands; and when they drink deadly poison, it will not hurt them at all; they will place their hands on sick people, and they will get well.”

Did you catch the reason Jesus rebuked his disciples?

It was for their “stubborn refusal to believe those who had seen him after he had risen.”

This brings us back to yesterday’s conversation about the nature of faith; what it is and what it is not.

Faith is the fruit of divine revelation wherein the Holy Spirit works in the human heart to convince one of a reality that could not otherwise be whole heartedly embraced.

One of the big problems with the way we think about faith is how we have allowed it to be framed by intellectual and scientific categories. It needs to “make sense” to our rational selves. We need to see some sort of scientific evidence beyond a reasonable doubt in order to consider it trustworthy to believe. Faith is on another plane. It operates in the real world yet from another dimension. Faith lives in the realm of divine revelation.

To better ascertain how we think about faith we need only define what we see as its opposite. Typically, people think the opposite of faith is doubt. In reality, doubt lives very close to faith. In fact, doubt may be a necessary precondition for faith. Let’s consider this through the proverbial lens of a “trust-fall.” You know what I’m talking about—when a group cajoles one of their friends to stand up on a table and fall backwards into the secure net of our linked up arms below. As the person stands on the table, he or she is already walking in the realm of faith. Doubt is simply part of the equation. I’m really not doubting if they will catch me. I’m doubting whether I have the courage to actually relinquish my control over myself. And why am I doubting this? It’s because of my fear. Fear, not doubt, is the opposite of faith. Think of a continuum with fear on the far left end and faith on the far right end.

Fear is the default condition of the human race. It’s why the first words from any messenger from God in the Bible are, “Do not be afraid.” This is doubly the case with Jesus. Left alone, our fear inevitably leads us to profound levels of self protection and a deep need to be in control. Faith is the movement from self preservation to self abandonment; from self protection to God’s protection and from my need to be in control to a surrendering to the control of God. Back to our continuum: Faith is the movement from fear through doubt into courage and onward to faith, which is an active trust in the promise of God’s goodness. Back to our trust fall, if I’m standing on the table, I have already confronted my fear and now face the battle between doubt and courage. Falling backwards is the act of abandoning myself into the secure arms of someone other than myself.

Do you see how doubt is not the failure to trust God but the beginning of moving beyond trusting in oneself? Doubt is a step in the right direction.

Back to our text: Jesus is not worried about our doubt. He is concerned with how fear so easily leads to taking steps in the wrong direction. So if doubt is a step in the right direction, what is a step in the wrong direction? Thanks for asking. It’s the “stubborn refusal to believe.” The stubborn refusal to believe has little to do with eye-witnesses or evidence or scientific proofs and everything to do with our broken ability to trust. I think the disciples found themselves espousing the commonly held human mentality of, “Fool me once, shame on you. Fool me twice, shame on me.” They had bet the farm on the wrong horse. There was no way in you-know-where they were about to believe Jesus was raised from the dead.

The stubborn refusal to believe is a doubling down of taking back control. My own need to be in complete control of my own life makes me my own god, which takes us all the way back to the Garden of Eden and what went wrong in the first place. It’s why the Garden of Gethsemane is so critical for us as a matter of our own discipleship. (i.e. “Not my will but your will be done.”) There’s so much more to say here but we must close for today.

So where do you find yourself on the continuum: Stubborn Refusal to Believe–Fear–Doubt–Courage–Faith–Abandoned to God. How does this way of thinking help you to approach those who stubbornly refuse to believe? Remember, Jesus rebuked his disciples, but many people who live in this place of refusal have never gotten anywhere near discipleship. Might we want to have compassion for the kind of brokenness that may lie beneath that refusal.

Spirit of the living God, fall afresh on me. Lord Jesus, I believe. Help my unbelief. Leave me out of my fear in on the pathway of a band and trust in you. Melton me Moulder me Phil me use me. For the glory of your name, Jesus. Amen

What is it that you are so afraid of When it comes to trusting God? What is it about you that causes you to need to be in control?