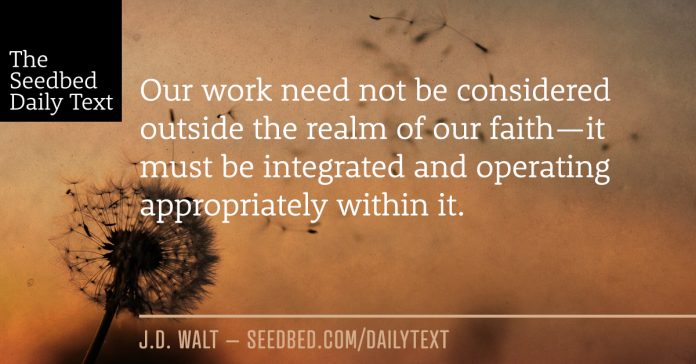 On the fourteenth night we were still being driven across the Adriatic Sea, when about midnight the sailors sensed they were approaching land. They took soundings and found that the water was a hundred and twenty feet deep. A short time later they took soundings again and found it was ninety feet deep. Fearing that we would be dashed against the rocks, they dropped four anchors from the stern and prayed for daylight. In an attempt to escape from the ship, the sailors let the lifeboat down into the sea, pretending they were going to lower some anchors from the bow. Then Paul said to the centurion and the soldiers, “Unless these men stay with the ship, you cannot be saved.” So the soldiers cut the ropes that held the lifeboat and let it drift away.

“Fearing that we would be dashed against the rocks, they dropped four anchors from the stern and prayed for daylight.”

That about says it all doesn’t it?

Translation: Prayer is a last ditch effort; something to do when everything else has failed.

Translation: Do everything you know to do. Then turn to God.

Am I suggesting human effort has no role in the Divine economy? Absolutely not. I’m just pointing out that our work need not be outside the realm of our faith.

Said more simply: Depend on God.

Didn’t Jesus say something like that when he said, “Apart from me you can do nothing.”

Let’s just leave it at that today.