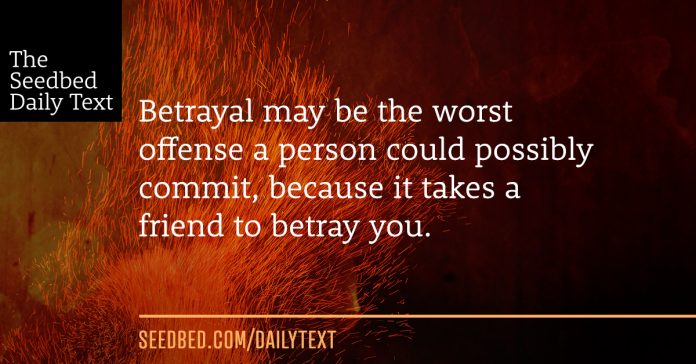 43 Just as he was speaking, Judas, one of the Twelve, appeared. With him was a crowd armed with swords and clubs, sent from the chief priests, the teachers of the law, and the elders.

44 Now the betrayer had arranged a signal with them: “The one I kiss is the man; arrest him and lead him away under guard.” 45 Going at once to Jesus, Judas said, “Rabbi!” and kissed him. 46 The men seized Jesus and arrested him. 47 Then one of those standing near drew his sword and struck the servant of the high priest, cutting off his ear.

48 “Am I leading a rebellion,” said Jesus, “that you have come out with swords and clubs to capture me? 49 Every day I was with you, teaching in the temple courts, and you did not arrest me. But the Scriptures must be fulfilled.” 50 Then everyone deserted him and fled.

51 A young man, wearing nothing but a linen garment, was following Jesus. When they seized him, 52 he fled naked, leaving his garment behind.

But there was a thirteenth.

A young man, wearing nothing but a linen garment, was following Jesus. When they seized him, 52 he fled naked, leaving his garment behind.

Tradition tells it was Mark from the Gospel of Mark.

Back to the betrayal. Betrayal may be the worst offense a person could possibly commit. Why? Because it takes a friend to betray you. It’s why betrayal is something you can get past, but never get over. It is a mortal wound.

Let’s leave it there today.

Spirit of the Living God, fall afresh on me. Lord Jesus, help me understand my own capacity for betrayal, and grant me the courageous grace to forgive those who would betray me, and those who have. Melt me. Mold me. Fill me. Use me. For the glory of your name, Jesus. Amen.