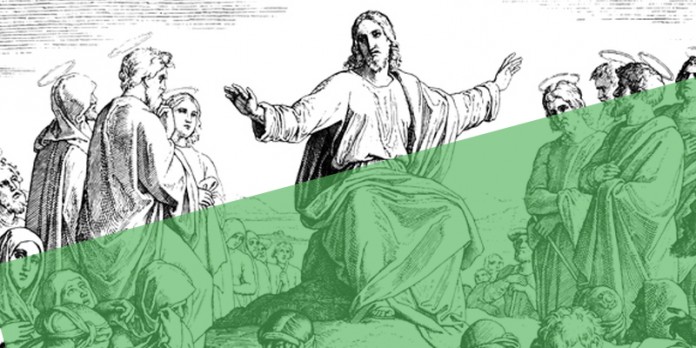 A popular adage has regularly been applied to the person of Jesus—he comforts the afflicted and afflicts the comfortable. This was true for his original audience and continues to be so for his contemporary readers. Sometimes this is true even of the same party, at the same time. People often enthusiastically embrace some of his teachings while deploring other parts. Indeed, his early followers sensed this challenge: “On hearing it, many of his disciples said, ‘This is a hard teaching. Who can accept it?'” (John 6:60)

So which of Jesus’ teachings are especially difficult to swallow given our modern sensibilities? The following highlights seven of these sayings, and though this isn’t an attempt to explain away some of his radical ideas, their perplexity is softened somewhat when they are read contextually in their historical setting and with appropriate literary atunement. Notice also that this approach to hearing Jesus also challenges the all too popular and simplistic attempt to contrast a radical “historical Jesus” with the “domesticated Jesus” of the early church or the Apostle Paul.

How could Jesus be so insensitive as to provoke a grief-stricken seeker to forego a proper burial for his parents? Some scholars have discovered a Jewish custom for having two ceremonies. It may be that Jesus was referring to this second, redundant ceremony. Others still suggest that the wording of the young man’s request means that the father was still living, and the son was asking for permission to fulfill his family duties until his father passed. Either way, Jesus is heightening the urgency of his kingdom work and placing loyalty to his cause above cultural expressions of family loyalties.

The western church has seemingly lost its right to speak to issues concerning sexuality since it has looked the other way when professing Christians divorce without biblical warrant. Could it be that Jesus, even against the Jewish culture of his day (which permitted a certificate of divorce for the most trivial of reasons), actually leaves room for very few exceptions to this covenant commitment (see “Remarriage and Divorce in Biblical Perspective” by Craig Keener)? Perhaps the church needs to repent of its loosening the bonds of marriage. This isn’t to say that divorced and remarried persons should live with perpetual shame for past mistakes. However, we should acknowledge that Jesus’ teaching here touches a sore spot for his church body.

If loving your neighbor must extend to include your enemies, how could it be that it is now restricted to exclude your family? Clearly this is an instance where Jesus is employing rhetorical hyperbole to drive home a point. This is obvious since in the Matthean account the author softens the effect by recording it as, “Anyone who loves his father or mother more than me is not worthy of me.” (10:37) This interpretation comports well with Paul’s admonishment in 1 Timothy 5:8 that caring for the family is essential to being a Christian. Nonetheless, it’s true—sometimes family ties can be so consuming that it leaves us with little time or resources in the way of working for his kingdom. I believe this temptation is all too real for many families today.

Our culture is paradoxically obsessed with perfection, as is evidenced by the rise of near cult-like gym and fitness followings, while also eschewing perfection and condemning it as an expression of self-righteousness and hypocrisy. So what could Jesus mean, if in other places Scripture asserts that humans fall short of perfection (Romans 3:10; Philippians 3:12; 1 John 1:8)? The word translated “perfect” in Hebrew could also mean complete, or whole. Still, Jesus raises the bar on righteousness earlier in this speech (5:20), and thus points his followers to the need for an atoning sacrifice which indeed makes us whole and endows us with the Holy Spirit who enables us to fulfill God’s law. Instead of despairing for having flaws, Christians may enter into the peace of Christ by his effectual work (Phil. 4:7).

This saying doubly offends because it seemingly advocates fear, which modern Christians reject as the basis for a relationship with God (see 1 John 4:18), and because it threatens the judgment of hell, which some consider to contradict the loving character of God. First it must be said that the word for fear has multiple senses. In the Greek language it likely refers to a strong respect or reverence, which is why in Acts 9:31 the church can “go on in the fear of the Lord.” Elsewhere it appropriately refers to the temporal or foundational affection that positions us before the holiness of God. Second, Jesus’ reference to hell (hades, or gehenna) is consistent with his overall teaching and concern for God’s mercy and judgment of evil and injustice. Whatever the existential nature of hell, Jesus and Paul authoritatively teach us that it is God’s way of dealing with evil and injustice outside of his kingdom.

WATCH: “Why Jesus Was More Than Just a Man” video by Jerome Van Kuiken

This challenge strikes at the heart of western Christians who live in a free market economy. Could Jesus really mean that we’re supposed to sell all that we have? Is this not also modeled in the early church in Acts 2 and 4? This is likely a localized, or conditional requirement for Jesus for that particular young man. It was common for ancient teachers and philosophers to require their followers to leave the comforts of their aristocratic world in order to focus intensely on the project of the teacher. Jesus was uttering a challenge of allegiances, one which we need to hear today as well, although it may take on different forms. See 1 Thess. 4:11. Whatever the particular challenge for us, Scripture teaches that Christian virtue does consistently require extravagant giving to those in need.

Didn’t Jesus in another place command us to turn the other cheek (Matt. 5:39)? It would be difficult to reconcile this advice about buying a sword with his admonitions at other times where he advised against using violence. It is likely that Jesus here is speaking ironically, suggesting that the arrest and charge they’re about to be indicted with would only be just if they would be political revolutionaries like the zealots (Isaiah 53). We know this because when Peter actually follows the command literally he is rebuked by Jesus. Rather than being an affirmation of modern gun laws or the use of self-defense, this passage is meant to highlight the injustice of the Roman and Jewish leaders violence against Jesus.

The background research here was a result of consulting with Gospel commentaries and especially the works of F. F. Bruce, The Hard Sayings of Jesus, and Craig Keener, The IVP Bible Background Commentary: New Testament.