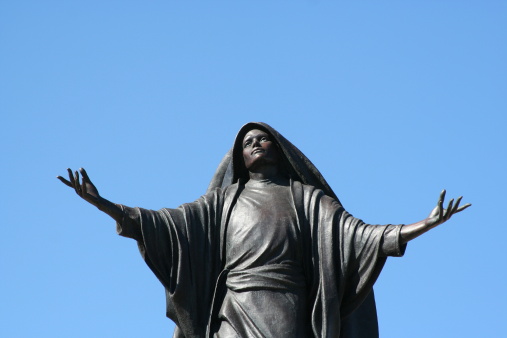 In our meeting last night, we read the story of Abigail in the Old Testament in 1 Samuel 25. As it was being read I was struck by something I had never noticed. Abigail is a type and shadow of Christ in this story. You can read the passage here.

This story is one of my favorites as an example of women who were honored in the Old Testament. Often, the church peddles a romanticized and chivalrous ideal (which has no foundation in Scripture) to encourage women to be submissive, quiet, dependent, and careful not to make waves. Particularly within a marriage, many churches teach that women should submit to the decisions of their husbands, even if the husband is making very wrong decisions. Women are encouraged that if they will submit and pray, God will honor this and intervene on their behalf. God may, of course, but often this type of response leads to more problems including domestic violence and abuse.

In contrast to what the world’s cultures may say—and in the Old Testament where women lived in a world that had far less equality than exists today—Scripture honors women who were anything but quiet, fearful, submissive, or weak when it comes to discerning the will of God and obeying Him. God consistently honors their boldness, not in being aggressive toward men or others, but in their wisdom and obedience to God.

In this story, Abigail is a wife of a man named Nabal who is foolish (his name actually means fool) and whose rash behavior has caused David to come with 400 men to destroy his household. When a servant tells Abigail what is happening, she immediately goes into action without consulting or telling Nabal, who we learn is most likely too drunk to think clearly. Her efforts saved the household from destruction because she understands the ways of God more than Nabal does. She so impresses God and David that her evil husband becomes ill and dies, and David makes her his wife.

In fact, David praises her for her good judgment. Her actions not only honor God and save her own household, but David recognizes that her wisdom saved him from spilling blood in revenge. He realizes this would have led to negative consequences for him as well.

I encourage you to read this story, because it is a great message to women who may be suffering domestic violence or other abuse. Women need to understand that God can and does honor them for their courage in doing the right thing for their households.

But, back to the main news here that Abigail seems to be an Old Testament type of Christ. As the story was read, I kept seeing images that I had never noticed before:

– She presents an offering for Nabal’s trespass (sin sacrifice)

– She prophecies about David’s reign (declaring the kingdom)

– She is a peacemaker

– She washes the feet of David’s servants

I’d never noticed this before and thought it was really interesting to see that God included a woman in scripture as a type of Christ. I’ll be looking in other stories of women to see if there are more images like this. I was encouraged that, once again, God includes and honors women in His redemptive plans.

This post originally appeared on cbeinternational.org. Used by permission.