Are There Boundaries to Grace? - Seedbed
close
Menu 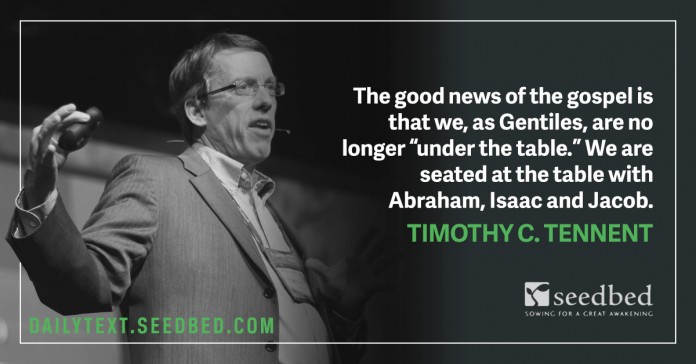 Jesus left that place and went to the vicinity of Tyre. He entered a house and did not want anyone to know it; yet he could not keep his presence secret. In fact, as soon as she heard about him, a woman whose little daughter was possessed by an impure spirit came and fell at his feet. The woman was a Greek, born in Syrian Phoenicia. She begged Jesus to drive the demon out of her daughter.

“First let the children eat all they want,” he told her, “for it is not right to take the children’s bread and toss it to the dogs.”

“Lord,” she replied, “even the dogs under the table eat the children’s crumbs.”

Then he told her, “For such a reply, you may go; the demon has left your daughter.”

She went home and found her child lying on the bed, and the demon gone.

Our text today raises the question: Does God care about me? This is Mark’s equivalent of the famous question which the lawyer asks Jesus, “Who is my neighbor?” In answer, Jesus tells the parable of the Good Samaritan. How far does God’s grace extend? Are there boundaries to God’s grace?

Jesus was in the region of Tyre and Sidon, about 40 miles northwest of the Sea of Galilee. He is outside of the boundaries of Israel, so it comes as no surprise that while there, He encounters a Greek woman. She is not a Jew, nor is she an heir of the covenant or any of the Old Testament promises which were the normal comfort for every Jew. She was born in Phoenicia, and yet she had a little daughter who was very sick. She comes to Jesus and begs that He drive the demon out of her daughter. We are so accustomed to Jesus having encounters with people who are ill, sick, possessed, or in some great need that it doesn’t surprise us in the least. There is nothing on the face of this request which appears at odds with anything we have seen before. We are so certain of Christ’s readiness to save and to administer His power and grace that we are nothing less than shocked by Jesus’ reply:

First, let the children eat all they want, for it is not right to take the children’s bread and toss it to their dogs! (vs. 27)

This doesn’t sound like Jesus, does it? After all, didn’t Jesus say, “love your enemies,” and “do good to them that persecute you.” He tells us to “pray for those who mistreat you.” This passage has disturbed so many people. Could Jesus be a racist? Could he be implying that since He is the Jewish Messiah, there was simply not enough grace to go around if it were given to the Gentiles? Some have even suggested that Jesus was just “joking” so he could see how the disciples would respond! No, none of these so-called “solutions” truly resonate with what we know of Jesus and the gospel.

The first thing we have to realize as we read this passage is that this is not a tiny conversation about one woman’s sick daughter. This is a big question about the whole ministry of Jesus. You might say that this is a theological conversation between Jesus and a very smart woman. Notice how she addresses him: “O Lord, Son of David.” (in the parallel account). This is the most Jewish title imaginable for Jesus, and it is coming out of the lips of a Gentile woman in a foreign country. She wants to know if the Gentiles will be recipients of the Jewish promises and the Jewish Messiah! Is Jesus the Savior of the world, or is He just the Savior of the Jewish people? Jesus responds by first reminding her that He did come as the Messiah for the Jews: “I have been sent to the lost sheep of Israel.” But there is a sequence of events as God’s salvation message unfolds. It flows to the Jews first, and then it flows to the Gentiles. Just as when you feed your family, everyone knows that you feed the children first, and then you feed your pets. Jesus is not insulting us by calling us “dogs.” Rather, He is merely pointing out the sequence of how salvation comes into the world. He first came as the Jewish Messiah, then He is revealed as the Savior of the world.

The woman insightfully replies that “even the dogs eat the crumbs which fall from the table.” In other words, Gentiles were already receiving blessings from God’s work among the Jews. The question is, “Is there more for us?” Jesus extended grace to her because this woman knew where things were headed. This woman is like someone who knew she was invited to your house for a meal, but showed up thirty minutes in advance. Even though she arrived early, you graciously invite her in. In the same way, even though the mission to the Gentiles was not supposed to be launched until after the resurrection, this woman seemed to instinctively realize that she was going to be included in these Jewish promises. The Lord granted her request. She may have arrived at the heavenly banquet early, but she was not to be denied! The good news of the gospel is that we, as Gentiles, are no longer “under the table.” We are seated at the table with Abraham, Isaac and Jacob. The true family of God is not based on shared ethnicity or blood, but those who share a common faith in the power and grace of Jesus Christ. Amen!

1. Are there people you know who have been marginalized or forgotten? Could you find a way to extend the grace of God to them?
2. How does it feel to be a Gentile when so much of the Bible is about the Jewish people and God’s promises to them? Do you feel “grafted in” to the Jewish race?