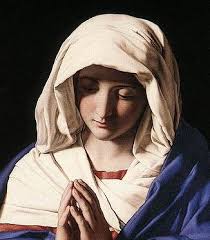 Taking a class in medieval Christian worship at Notre Dame in 1975, I quickly learned what BVM meant. Blessed Virgin Mary. Not Bureau of Motor Vehicles.

This is the season when we especially remember Mary, Jesus’ mother. At the Annunciation, Mary sang, “Surely, from now on all generations will call me blessed” (Lk 1:48).

How was Mary blessed? How blessed was Mary?

Mary says, “the Mighty One has done great things for me, and holy is his name” (Lk 1:49).
Certainly! I also rejoice and praise. But stop and consider: What “great things” did the Mighty One do for Mary?

Exposed her to misunderstanding, rumors, and possible disgrace through her pregnancy.

Sent her on a difficult journey to Bethlehem when she was eight or nine months pregnant.

Allowed her to be give birth in a stable. (Call that a stable life?)

Led her into a refugee life in Egypt, fleeing to save her son from execution.

Brought her into great anxiety when she and Joseph were searching for Jesus in Jerusalem when he was twelve.

Above all else: Mary had to watch her son’s agonizing, hours-long execution. (N. T. Wright explains the crucifixion process in his book The Day the Revolution Began).

We could cite other examples, each painful in its own way. Mary had been warned: “a sword will pierce your own soul too” (Lk 2:35).

Of course, Mary later saw Jesus risen and presumably spent time with him. She was present at Pentecost, and no doubt overflowed with the Spirit.

Eventually, Mary died – we don’t really know when, where, or under what circumstances. Like us, she awaits the final resurrection.

What are we to make of all this? Blessed? Great things? Indeed, but not exactly wonderful blessings, as we would understand them. Presumably Mary did not know and could have known at the Annunciation all that would follow.

If we are going to be factual and historical – not merely romantic or devoutly pious – what are we to make of what happened to Mary? Too often, I think, we jump to obvious spiritual applications (“We should have the attitude of Mary!”) and forget the actual history – Mary’s, and our own.

To be chosen by God for “great things” may be very different from what we would want or expect. Consider Jeremiah, or the good folks in Hebrews 11. We may want to sympathize with Tevye in Fiddler on the Roof: “Once in awhile, can’t you choose someone else?”

One could argue that Mary’s song makes absolutely no sense. God “has brought down the powerful from their thrones, and lifted up the lowly; he has filled the hungry with good things, and sent the rich away empty.” Oh? What about Aleppo and Mosul today, or South Sudan, or North Korea, or bombings in Istanbul and Cairo? Or current U.S. politics? And so on and on.

One can speak of “already, but not yet.” But where is the “already”? Why does God’s kingdom appear so almost totally “not yet”?

There is only one way, I think, to make sense of this, and that is essentially what we find in the Psalms and many of the prophets, and of course in Jesus himself, and many of the New Testament Christians: We live by faith and hope in the secure certainty of God’s promises of shalom, creation healed, despite all the empirical, TV-and-newspaper-reported facts and pseudo-facts we see and hear. We do in fact believe in a larger reality, a whole set of dimensions that we inhabit today only by faith.

Or almost only by faith, for the church exists to enable us to live that alternative reality now in communities where we really do see and experience evidence of that shalom that is yet to come. Not just wish for it.

If the church isn’t that kind of community, it is largely wasting its and our time and likely weighing on the wrong side of the kingdom-of-God balance.

That kind of Christian existence means actual, real, countercultural life that shapes our time, work, money, relationships, politics, priorities, worldview, likes and dislikes, encouragements and discouragements, and immunizes us from the ideologies and commercialized siren songs that surround us and press in on us.

Only in this way can the kingdom’s “already” become more actual and factual and the “not yet” not so far off and not pious nonsense.

Can we start being more historically realist and less spiritually romantic in our present lives? Because to live in such spiritual romanticism is really to inhabit an unbiblical dualism, a schizophrenic discipleship that is more a part of the disease than part of the cure.

There was, after all, the “slaughter of the innocents” in Bethlehem. In many ways the slaughter continues, unabated and unaccounted for, at least so far as we can see now.

My heart does indeed rejoice in God our Savior, echoing Mary’s song. But it has to be in the sense of Romans 8:19-21 – creation groaning but expecting redemption. And we can’t successfully live and survive this way without Christian one-anothering in actual space and time — and on that basis raising signs of the kingdom around us, and cheering those signs we see elsewhere, in and beyond the church.

This past Sunday evening I watched a “60 Minutes” report on how the government of Salvador convinced the FARC guerillas to lay down their arms and join in a peace process. The government approach — after fifty years of fighting — was gentle and invitational, some of it around the theme, “Come home for Christmas.”

It worked. Peace has now come, though much work yet remains.

Jesus is bringing his kingdom. But the process is costly and painful, often hidden and apparently contradictory. We are called not to retreat into spiritual capsules but, indeed, to be like Blessed Virgin Mary.

I still believe with Mary that “They will not hurt or destroy on all my holy mountain; for the earth will be full of the knowledge of the Lord as the waters cover the sea” (Isa 11:9). And that this is not a picture of heaven, but of creation once-for-all healed.