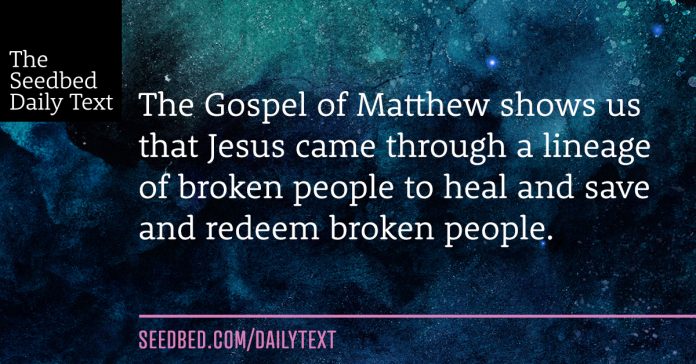 Matthew 1:1
This is the genealogy of Jesus the Messiah the son of David, the son of Abraham . . .

Matthew begins his Gospel with the genealogy of Jesus, tracing the roots of His family tree. To the modern reader, this seems like a terrible way to start a story. Our eyes glaze over and minds wander as he recites branch after branch of names that mean nothing to us. But Matthew is not only establishing that Jesus was born into the unbroken royal line of David, but that he was also born into the broken storyline of humanity.

The names Abraham and David stir up memory of God’s covenant with His people. His faithfulness to them fuels our hope in Advent as we await the ultimate child of promise, that brightest star in Abraham’s sky, who will reign on David’s throne as our Anointed Shepherd King. And yet these names cast a shadow as well, their failures sowing the seeds of ancestral sin.

Matthew makes a strange move in recounting the history of Jesus’ arrival. Against the tradition of his patriarchal society and time, he chooses to include the names of women in this lineage. And not just any names. There is Tamar, a victim of injustice who in turn disguises herself as a prostitute in order to deceive her father-in-law Judah. She becomes pregnant by him and their offspring becomes an ancestor of the Messiah. Then there is Rahab, a prostitute by trade who rescues the spies of Joshua in Jericho. She plays a key role in that military victory and eventually takes her place in the family line of the Savior. And Ruth, a foreigner from enemy territory who marries Rahab’s son and becomes the great grandmother of King David.

And speaking of David, Matthew lists him here alongside Bathsheba. David drags her into this genealogy by way of lust, adultery, betrayal, and murder. (Try to make a Christmas card out of that.) He sleeps with Bathsheba while her husband Uriah is fighting David’s war. After she conceives, he arranges for Uriah to be abandoned in battle, killing him to cover the sin.

Now, a word for Bathsheba. She is often cast as a temptress who seduces David and draws him into her web. But please remember the story. This takes place in a patriarchal society where David, military hero and man after God’s own heart, serves as a monarch divinely chosen by God Himself. All of the power rests on David in this scenario. We should not see this as a passionate affair. Instead, this is a tragic abuse of power. And God will not stand for it. David is confronted and judged. And God refuses to reject Bathsheba, bringing her into the line of Jesus.

Matthew shows us that Jesus came through a lineage of broken people to heal and save and redeem broken people. He is like the artist that salvages unexpected materials and breathes beauty into them. From the broken pieces of our story, He carefully constructs a stunning mosaic of grace that shouts forgiveness is possible and redemption is coming for you.

The journey from Sarah’s womb to Mary’s is marked with willing sin, gut-wrenching injustice, and the grotesque abuse of power. Those who sin and are sinned against. It’s into the middle of this reality—our reality—that Jesus is born, reversing the trajectory of the entire story. He confronts us with the truth that sin is strong, but grace is stronger. Sin doesn’t get the final say. Because of a little baby born in Bethlehem, grace always has the last word.

Remember this: You aren’t the only one with a past. God has one too.
Peace is knowing that your past is not nearly as defining as His.

God of the past, present, and future, I surrender the broken pieces to you.

What parts of my past need to be healed?
How might God bend even that toward redemption?