Can Jesus Be My Savior and Not Be My Lord? - Seedbed
close
Menu

17 On the first day of the Festival of Unleavened Bread, the disciples came to Jesus and asked, “Where do you want us to make preparations for you to eat the Passover?”

18 He replied, “Go into the city to a certain man and tell him, ‘The Teacher says: My appointed time is near. I am going to celebrate the Passover with my disciples at your house.’” 19 So the disciples did as Jesus had directed them and prepared the Passover.

20 When evening came, Jesus was reclining at the table with the Twelve. 21 And while they were eating, he said, “Truly I tell you, one of you will betray me.”

22 They were very sad and began to say to him one after the other, “Surely you don’t mean me, Lord?”

23 Jesus replied, “The one who has dipped his hand into the bowl with me will betray me.24 The Son of Man will go just as it is written about him. But woe to that man who betrays the Son of Man! It would be better for him if he had not been born.”

25 Then Judas, the one who would betray him, said, “Surely you don’t mean me, Rabbi?”

Jesus answered, “You have said so.”

I’m getting an insight from today’s text I have never noticed before. Before going further, I want to be up front and say I may be making more of this insight than is warranted by the text. Then again, maybe not.

Remember the little puzzle they used to put in the newspaper every day called, “Hocus Focus?” They would print two frames of what appeared to be the exact same picture only the second picture would be missing several small details from the first picture. The task was to see how many differences you could find.

It occurs to me that we have a bit of a hocus focus moment going on between the eleven disciples response to Jesus and the response of Judas.

Here’s how the eleven responded: They were very sad and began to say to him one after the other, “Surely you don’t mean me, Lord?”

Here’s how Judas responded: Then Judas, the one who would betray him, said, “Surely you don’t mean me, Rabbi?”

Can you spot the difference in their responses?

Yes, it’s the way they addressed Jesus. The eleven called him, “Lord.” Judas called him “Rabbi.”

To call someone Lord knowing you have betrayed him is an absolute conflict of interest. It would be a bold faced lie. Maybe that’s how a betrayer lives with him or herself—by denying the relationship first. Before betraying another person you must first kill the relationship. At least you must come to the place where the other person is, “dead to you.” In this sense we can say of betrayal that it does not kill a relationship. It is a sign that the relationship was already dead.

Bringing it back around to the critical application—how do you deal with Jesus? Is he your Lord? Do you acknowledge and submit to his absolute authority in your life? Are you more comfortable with seeing him as a teacher? How about your teacher?

The second we slip away from Jesus as our Lord we move into the dangerous country of denial and set our path toward betrayal.

So let me ask you a piercing question. Would it be fair to say that Jesus is either our Lord or he is nothing to us? I think you know how I would answer the question.

It sounds harsh and we very much want to carve out some middle ground. It’s so easy to want to claim Jesus as our Savior and stop well short of making him our Lord. To acknowledge him as Savior is to recognize and receive what he has done for me. To acknowledge him as Lord is to recognize who he is to me. I want you to think hard about this. Can Jesus be your Savior and not be your Lord?

I think you know where I stand on that one. What matters is where you stand, and why. 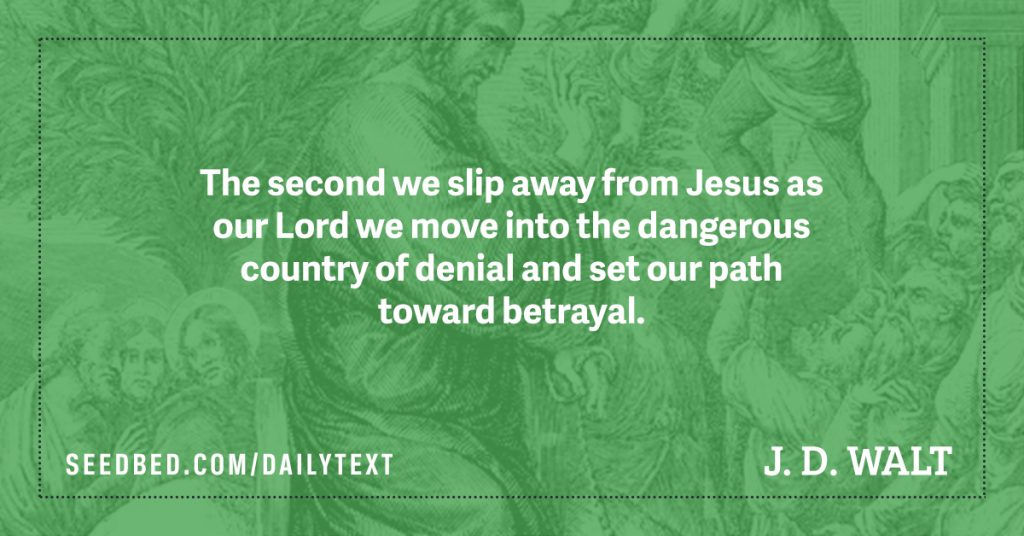 1. What are your thoughts about the question– Can Jesus be your Savior and not be your Lord?

2. E. Stanley Jones once famously said, “Jesus is Lord of all or he is not Lord at all.” How do you reflect on that statement?

3. Is it possible that you could be deceived about the nature of your relationship to Jesus? How would you know?