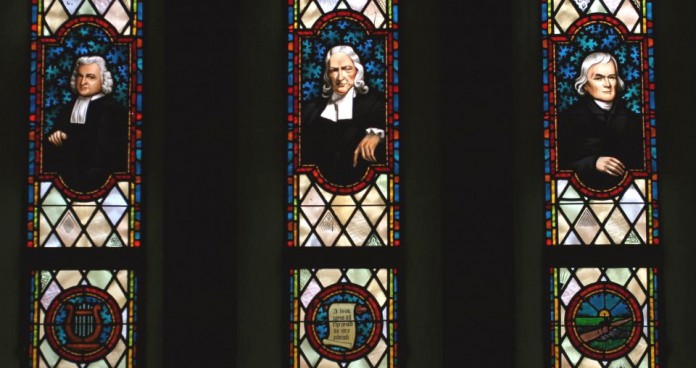 I love accents! I could listen to someone from Boston say “Harvard” all day. I could hear someone from England say “Cheers” and never cease to be intrigued. Accents are interesting to people who speak the same language because they highlight real difference (someone sounds truly different, or I sound truly different to them) but there is also a meaningful sameness, because I can (for the most part) easily communicate with the person. English speaking people from the United States and Ireland speak the same language, but they do so with clear difference.

One of the themes of 1 Corinthians is the appearance of signs of disunity in the church, where people began emphasizing loyalty to contemporary leaders rather than to Jesus. In the first chapter of 1 Corinthians, Paul names this and calls the church in Corinth back to unity in Jesus Christ. Paul wrote:

This passage provides a helpful reminder today that the first goal of any Christian tradition is to call people to follow Jesus, not someone else. Wesleyan Christians, then, should not proclaim a different faith than their Catholic, Calvinist, or Lutheran brothers and sisters in Christ. Rather, they should proclaim Christ in a way that is in the same language, but sounds a bit different to other parts of the body of Christ. Wesleyans speak the language of historic Christian orthodoxy with a Wesleyan accent.

And, indeed, John Wesley himself argued that Methodism was nothing more than basic Christianity. In “Thoughts upon Methodism,” an essay he wrote in the last years of his life, Wesley described what he saw as the keys to the ongoing spiritual vitality of the people called Methodists. Wesley wrote:

“I am not afraid that the people called Methodists should ever cease to exist either in Europe or America. But I am afraid lest they should only exist as a dead sect, having the form of religion without the power. And this undoubtedly will be the case unless they hold fast both the doctrine, spirit, and discipline with which they first set out.” (John Wesley, “Thoughts upon Methodism,” Bicentennial Edition of the Works of John Wesley, 9:527)

Wesley was arguing (perhaps it could even be seen as a prophesy) that the Wesleyan movement would be a movement of the Spirit of God only as long as it held fast to its basic doctrine, spirit, and discipline. (This is the first of a four part series on Christianity in a Wesleyan accent. The next three posts will flesh out what Wesley meant by each of these.)  It would be a misunderstanding to view this passage as a call to be different from other Christians for its own sake. In fact, Wesley proactively addresses this potential misunderstanding towards the end of this brief essay. He wrote: “From this short sketch of Methodism (so called) any man of understanding may easily discern that it is only plain scriptural religion, guarded by a few prudential regulations” (“Thoughts upon Methodism,” 9:529).

John Wesley’s main priority, then, was not his accent! His main goal was to proclaim Christ and help people come to faith in Jesus and grow in holiness. Wesley was not trying to be distinctive, or to get people to follow him instead of Jesus. He was trying to point people to “plain scriptural religion.”

Wesley stated this even more clearly in another essay:

“These are the marks of a true Methodist. By these alone do [Methodists]… desire to be distinguished from other men. If any man say, ‘Why, these are only the common, fundamental principles of Christianity’ …. This is the very truth. I know they are no other, and I would to God both thou and all men knew that I, and all who follow my judgment, do vehemently refuse to be distinguished from other men by any but the common principles of Christianity – the plain, old Christianity that I teach, renouncing and detesting all other marks of distinction.” (“The Character of a Methodist,” 9:41, emphasis mine)

Wesleyans, at our best, refuse to be distinguished from others by anything but basic Christianity. But within that “basic Christianity” there is an accent. When Wesleyans read the Bible (which for us is the main place where “basic Christianity” is found), we hear a call to be deeply renewed by the grace of God. We see that because of the life, death, and resurrection of Jesus Christ, sin no longer reigns and is no longer necessary for those who are in Christ. Wesleyans, then, are most passionate about telling people about Jesus and helping them to live the kind of life that Jesus has made it possible for them to live.

In short, our Wesleyan accent can be seen and heard in the belief that God wants to make us holy, now, in this life. This conviction is at the heart of Wesleyan doctrine, it infused the spirit of early Methodism, and a practical approach to becoming holy was traced out in early Methodist discipline. We do not have a monopoly on holiness within Christianity. But Wesleyans are sometimes so passionate about it that we sound almost as different to outsiders as an Irishman does in Oklahoma.

The next post will discuss the way that Wesleyans preach, teach, and proclaim Christian doctrine with a particular accent.