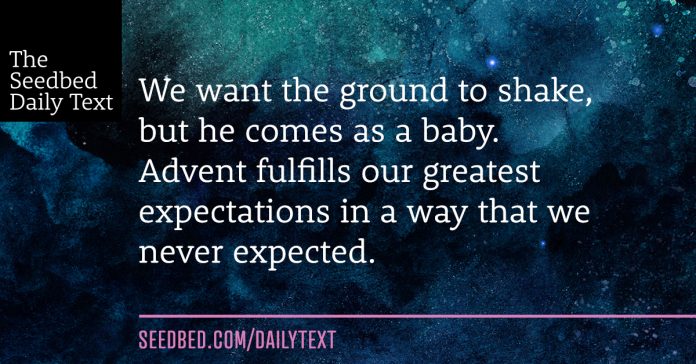 1 Oh, that you would rend the heavens and come down,
that the mountains would tremble before you!
2 As when fire sets twigs ablaze
and causes water to boil,
come down to make your name known to your enemies
and cause the nations to quake before you!
3 For when you did awesome things that we did not expect,
you came down, and the mountains trembled before you.
4 Since ancient times no one has heard,
no ear has perceived,
no eye has seen any God besides you,
who acts on behalf of those who wait for him.

O God that you would rend the heavens and come down.

These are the words of Isaiah, the prophet laureate of Advent. We hang on his words this time every year, waiting for the arrival of the promised Savior. And no one casts that vision quite like Isaiah. But here in chapter 64 of his book, he breaks from the familiar tones of expectant hope and instead pours out a lament.

To ‘rend a garment’ in ancient Jewish culture was a sign of deep despair and mourning, an outward physical representation of what was taking place in the soul. In this lament Isaiah draws on this imagery as he pleads for God to mourn with us, to “rend the heavens” like a garment. Look at the chaos of the world, Lord, and grieve alongside us.

But Isaiah asks for more. Don’t just grieve over what is wrong, come down and set it right. Don’t just share our pain, be active in healing it. We need a theophany, an appearance, a sighting that we can get our senses around. We know you are working behind the scenes, directing the play. But we need you to step onto center stage and take the lead role.

And this, of course, is exactly what God does. God answers this prayer through the scandalous mystery of the Incarnation. The Author steps into the story as the Protagonist. But not in the way that we expect.

We want the trembling mountains Isaiah describes in verse 1 or the blazing fire of verse 2. These images call to mind Moses on Mount Sinai or Elijah on Mount Carmel. We want to see that again! Instead, He moves more in line with the words of verse 3: “You did awesome things we did not expect.”

We want undeniable glory. He goes with the scandal of an unmarried pregnant teenager. We want the ground to shake. He comes as a baby. And once again we are reminded that Advent fulfills our greatest expectations in a way that we never expected.