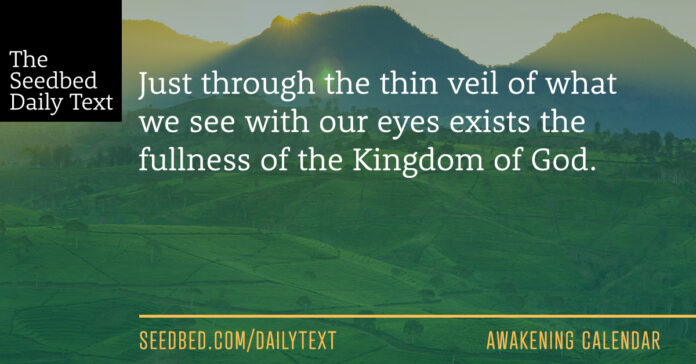 2 After six days Jesus took Peter, James and John with him and led them up a high mountain, where they were all alone. There he was transfigured before them. 3 His clothes became dazzling white, whiter than anyone in the world could bleach them. 4 And there appeared before them Elijah and Moses, who were talking with Jesus.

5 Peter said to Jesus, “Rabbi, it is good for us to be here. Let us put up three shelters—one for you, one for Moses and one for Elijah.” 6 (He did not know what to say, they were so frightened.)

7 Then a cloud appeared and covered them, and a voice came from the cloud: “This is my Son, whom I love. Listen to him!”

8 Suddenly, when they looked around, they no longer saw anyone with them except Jesus.

9 As they were coming down the mountain, Jesus gave them orders not to tell anyone what they had seen until the Son of Man had risen from the dead. 10 They kept the matter to themselves, discussing what “rising from the dead” meant.

This is one of the most stunning texts in the whole Bible yet all I have ever heard about it are interesting facts and theological tidbits. Stuff like, Moses represents the Law and Elijah the Prophets and Jesus the gospel. Awesome! Then there’s the surmising that these two had come to talk to Jesus about his ascension to Heaven since they both had those types of exits from Earth. Cool!

But so what I ask myself. What is the point of this story? I think we need to go back one verse to get at it.

And he said to them, “Truly I tell you, some who are standing here will not taste death before they see that the kingdom of God has come with power.” (Mark 9:1)

The “some of you” were Peter, James and John. And the “kingdom of God has come with power,” reference? This was that.

He then went about and demonstrated the breakthrough power of the Kingdom of God through his preaching, teaching, and healing. Now he takes “The Rock” and the “Sons of Thunder” to the top of a high mountain where he pulls back the veil on the world as we see it in order to reveal the Kingdom of God coming in power.

Just through the thin veil of what we see with our eyes exists the fullness of the Kingdom of God. It is all there, right here and right now—even more real than the reality we know. This ultimate reality hovers all around us. It includes the great Cloud of Witnesses, also known as the Communion of Saints, comprising all who have blazed the trail of faith before us. They are real and present and live in the realm of eternity, which is far more durable and permanent than the present realm of this fallen creation. In the center of this reality sits Jesus at the right hand of the Father, with the pure dazzling brightness of the Light of ten thousand suns, profusing life to all who seek his Kingdom, ruling and reigning as Lord of Heaven and Earth. Coursing from this eternal realm through the thin veil of time is the Holy Spirit, poured out like liquid love all over the face of the Earth, on all people, ready with mercy, willing with grace, wooing with love, making all things new—readying all things for the final coming of Jesus and the consummation of the age to come.

This is why Jesus takes us up the Mount of Transfiguration. The nice little theological pointers turn out to be the icing on the cake. This otherworldly vision on Transfiguration Mountain turns out to be the reality check we most need as we follow Jesus down the long road to the Cross on this side of the thin and porous veil separating what is seen from what is unseen. We are the Body of Christ, the appointed ambassadors of this Kingdom now coming and yet to come, imploring all of Creation to be reconciled to God through Jesus Christ. As we make the turn toward the Cross and prepare for the journey of descent into the valley of vision, let us feast on these words from our Apostle Paul:

Therefore we do not lose heart. Though outwardly we are wasting away, yet inwardly we are being renewed day by day. 17 For our light and momentary troubles are achieving for us an eternal glory that far outweighs them all. 18 So we fix our eyes not on what is seen, but on what is unseen, since what is seen is temporary, but what is unseen is eternal. (2 Corinthians 4:16-18)

See you here tomorrow for an encore as we prepare for Ash Wednesday and the journey back down the other side.

Glory be to the Father, and to the Son and to the Holy Ghost! As it was in the beginning; is now and ever shall be. World without end—Amen. Amen!

How confident are you in this visionary, palpable, true and ultimate reality of the Kingdom of God, now coming in power, yet waiting finally for mercy’s sake, that all who would come in will come? How might this be translated into your actual faith?