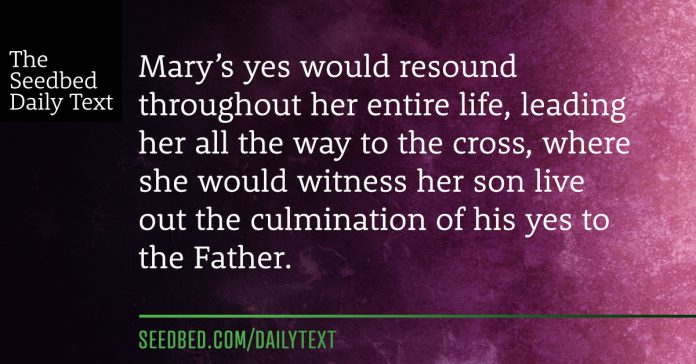 In the sixth month of Elizabeth’s pregnancy, God sent the angel Gabriel to Nazareth, a village in Galilee to a virgin named Mary. She was engaged to be married to a man named Joseph, a descendant of King David. Gabriel appeared to her and said, “Greetings, favored woman! The Lord is with you!”

Confused and disturbed, Mary tried to think what the angel could mean. “Don’t be afraid, Mary,” the angel told her, “for you have found favor with God! You will conceive and give birth to a son, and you will name him Jesus.  He will be very great and will be called the Son of the Most High. The Lord God will give him the throne of his ancestor David.  And he will reign over Israel forever; his Kingdom will never end!”

Mary asked the angel, “But how can this happen? I am a virgin.”

The angel replied, “The Holy Spirit will come upon you, and the power of the Most High will overshadow you. So the baby to be born will be holy, and he will be called the Son of God. What’s more, your relative Elizabeth has become pregnant in her old age! People used to say she was barren, but she has conceived a son and is now in her sixth month. For the word of God will never fail.”

Mary responded, “I am the Lord’s servant. May everything you have said about me come true.” And then the angel left her.

I’ve often thought of my relationship with God as a series of yeses.

Reflecting on my life, I’ve found that there wasn’t just one moment when I said yes to God. Rather, there have been many yeses, some big and most seemingly small, that have all built up together into one resounding yes to God’s movement in my life.

I think it was probably the same for Mary. Our scripture for today highlights a moment when she gave a big yes to God, but this one yes was most likely the result of many other small yeses that came earlier in her life. We definitely know that this was not the last yes that she would offer to God. Mary’s yes would resound throughout her entire life, leading her all the way to the cross, where she would witness her son live out the culmination of his yes to the Father. And after everything was finished, she would care for his broken body, saying yes to her life as the mother of God even after his death.

Mary’s teenage yes to the Angel of the Lord in the little town of Nazareth was a costly consent.

She didn’t know how Joseph would handle the news about his virgin bride. She could have been stoned for her illegitimate pregnancy. Her life would be forever hounded by rumors and questions surrounding Jesus’ birth. She would have to be silent through it all, holding everything close to her heart, trusting that the source of her shame would someday become her people’s salvation.

The Catholic Church has a word for Mary’s yes.

It is the Latin word fiat, which means, “let it be done to me.”

Fiat is a word of complete surrender.

It’s a costly word, but it is also a word that is pregnant with possibilities.

We often think of Jesus’ faithfulness to God as coming from his divinity. But what if his obedience to the Father was also kindled within him by the example of his mother Mary?

Jesus gave his own fiat, his own costly consent, his own let it be done to God as he wrestled with his coming crucifixion in the Garden of Gethsemane. Even in this final step of surrender, he followed in the footsteps of his mother.

Mary’s fiat cost her everything, but it also transformed her into the Mother of God and into a mother of faith for us all. Her costly consent set a standard of faith for all who would come after her, even for Jesus himself.

God allows his kingdom work to depend on the fiat, the consent, the yes of his people. The Father does not force his way upon us. Instead, he waits for us to choose whether or not we want to give our fiat to the movement of his Spirit within us and through us.

The invitation as we near the end of Advent is to renew our consent.

Every day is a new opportunity to give our fiat, our yes, to the Lord.

Our fiat will cost us, but it will also gift us with abundance.
We will be led to the cross, but we will also walk out of the grave.
We will find ourselves empty, but only to be filled with all the glory of God.

May we choose to respond to the Spirit today with the words of Mary, the mother of our faith:

“I am the Lord’s servant. May everything you have said about me come true.”

Holy God, may I offer you my “yes” in the little moments of my day.
May all my small “yeses” become one large “yes” of my life to you.

Obedience by Lindy and the Circuit Riders