Crash of Heaven and Earth Week 1: “As It Is In Heaven” - Seedbed
close
Menu 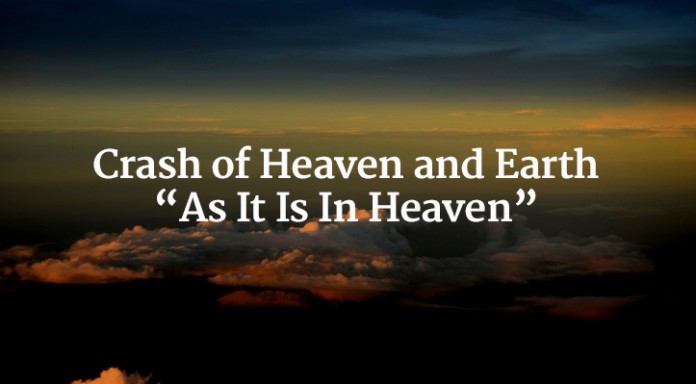 The goal of this lesson is for students to understand their role in the Kingdom of God “on earth as it is in heaven”.

Recite the Lord’s Prayer together (remind students that this is the prayer Jesus taught his disciples to pray):

“Our Father who art in Heaven, hallowed be Thy name.
Thy kingdom come, thy will be done, on earth as it is in heaven.
Give us this day our daily bread, and forgive us our trespasses as we forgive those who trespass against us. And lead us not into temptation, but deliver us from evil.
For Thine is the kingdom, and the power, and the glory forever. Amen.”

Which part of that prayer to do you connect with the most? Which part is the hardest to understand or accept? What do you think Jesus meant when he said, “Thy kingdom come, Thy will be done, on earth as it is in heaven”?

What does it mean for things to be “on earth as it is in heaven”? Is that someone that happens “now” or “later”? Where have you seen a glimpse or an example of this happening in your own life or in the world?

“We started a new series today where we are talking about heaven and earth colliding, and how we can live lives that bring the Kingdom of God to earth as it is in heaven (like Jesus’ words in the Lord’s Prayer that Jesus taught his disciples to pray). Listen, now, to what Jesus told his disciples in his meeting with them after his resurrection…

1 In my former book, Theophilus, I wrote about all that Jesus began to do and to teach 2 until the day he was taken up to heaven, after giving instructions through the Holy Spirit to the apostles he had chosen. 3 After his suffering, he presented himself to them and gave many convincing proofs that he was alive. He appeared to them over a period of forty days and spoke about the kingdom of God. 4 On one occasion, while he was eating with them, he gave them this command: “Do not leave Jerusalem, but wait for the gift my Father promised, which you have heard me speak about. 5 For John baptized with [a] water, but in a few days you will be baptized with the Holy Spirit.” 6 So when they met together, they asked him, “Lord, are you at this time going to restore the kingdom to Israel?” 7 He said to them: “It is not for you to know the times or dates the Father has set by his own authority. 8 But you will receive power when the Holy Spirit comes on you; and you will be my witnesses in Jerusalem, and in all Judea and Samaria, and to the ends of the earth.” 9 After he said this, he was taken up before their very eyes, and a cloud hid him from their sight. 10 They were looking intently up into the sky as he was going, when suddenly two men dressed in white stood beside them.

“We’re going to close tonight’s session with a special kind of prayer. This is called “Prayers of the People” and it is found in the United Methodist Hymnal (we did something similar in Sunday School today). It goes like this…

The following may be prayed, during which any person may offer a brief prayer of intercession or petition. After each prayer, the leader may conclude: Lord, in your mercy,
and all may respond: Hear our prayer.