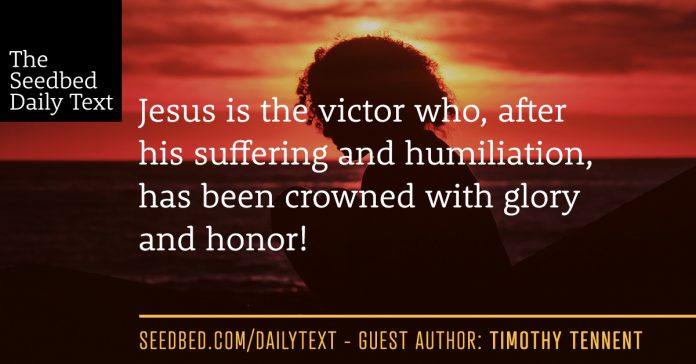 1 The earth is the Lord’s, and everything in it,
the world, and all who live in it;
2 for he founded it on the seas
and established it on the waters.

3 Who may ascend the mountain of the Lord?
Who may stand in his holy place?
4 The one who has clean hands and a pure heart,
who does not trust in an idol
or swear by a false god.

5 They will receive blessing from the Lord
and vindication from God their Savior.
6 Such is the generation of those who seek him,
who seek your face, God of Jacob.

Today is Ascension Sunday when we remember Christ’s ascension to the right hand of the Father. Psalm 24 has been regarded as one of the great Old Testament texts prefiguring the ascension of Christ. The Psalm begins with a declaration that God is both the Creator and the Lord of history. Is there any greater affirmation of the sovereignty of God than the opening line of Psalm 24? “The earth is the Lord’s, and everything in it, the world, and all who live in it” (v. 1). There is not one square inch of the entire creation, or one single person who has ever lived that is not under the providential sovereignty of God! He is Lord.

The heart of this psalm reminds us that we have no access to the holy presence of God. “Who may ascend the hill of the Lord? Who may stand in his holy place?” (v. 3). The answer is only one with “clean hands and a pure heart” (v. 4). The supreme crisis of the human race is captured in this solemn reply. Even the New Testament picks up on the solemnity of this verse when it declares, “For all have sinned and fall short of the glory of God” (Romans 3:23). The only way to bridge the great gulf between heaven and earth, between God’s holiness and our sinfulness, is through a divine condescension whereby God himself bridges the chasm and takes on human flesh and walks among us. This is the heart of the good news of Jesus Christ. He alone is the one who has lived with “clean hands and a pure heart” (Psalm 24:4).

This psalm also foreshadows a segment of history not seen by human witnesses: the entrance of the ascended, victorious Christ into heaven. “Lift up your heads . . . that the King of glory may come in” (v. 7). The initial ascension of Christ was observed by his disciples (Luke 24:51; Acts 1:9), and we now know that he is seated at the right hand of God the Father. What was not observed by any human eye was the glorious entry into heaven after the work of redemption was accomplished. The early church saw in Psalm 24 a marvelous foreshadowing of that great event: “Lift up your heads O you gates; be lifted up, you ancient doors, that the King of glory may come in” (v. 7). The gates of the Lord joyously ask, “Who is this King of glory?” The triumphal refrain comes back, “the Lord strong and mighty, the Lord mighty in battle” (v. 8). The refrain is repeated to add to the triumphal victory of the whole scene (vv. 7–10). This is the great theme of the ascension: Jesus is the victor who, after his suffering and humiliation, has been crowned with glory and honor!