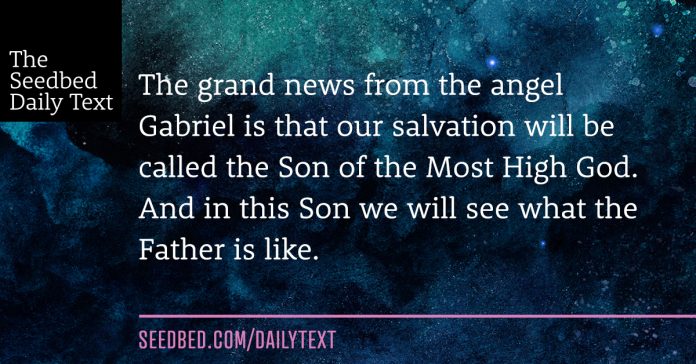 26 In the sixth month of Elizabeth’s pregnancy, God sent the angel Gabriel to Nazareth, a town in Galilee, 27 to a virgin pledged to be married to a man named Joseph, a descendant of David. The virgin’s name was Mary. 28 The angel went to her and said, “Greetings, you who are highly favored! The Lord is with you.”

29 Mary was greatly troubled at his words and wondered what kind of greeting this might be. 30 But the angel said to her, “Do not be afraid, Mary; you have found favor with God. 31 You will conceive and give birth to a son, and you are to call him Jesus. 32 He will be great and will be called the Son of the Most High. The Lord God will give him the throne of his father David, 33 and he will reign over Jacob’s descendants forever; his kingdom will never end.”

One of my heroes has long been Dr. Martin Luther King, Jr.

Yet it pains me to confess that I knew next to nothing about his father, Dr. Martin Luther King, Sr. ‘Daddy King,’ as he was affectionately known within his family and throughout the Civil Rights Movement, was the Pastor of Ebenezer Baptist Church in Atlanta, Georgia. The younger King was actually an associate pastor, serving under the leadership of his father.

Daddy King suffered unthinkable tragedy in his life. The nation joined his mourning over the brutal assassination of Martin Jr. But he lost his youngest son Alfred as well, only one year later, in a mysterious drowning. Alfred had been on his college swim team, which led many to suspect foul play in his death. And shortly after that, he even lost his beloved wife. A gunman entered their church and shot Mrs. Alberta King while she sat playing the organ.

So much heartache. How does one person bear such pain? And yet, the witnesses remember that through the rest of his ministry, Daddy King never stopped preaching the Gospel of Jesus’ radical love. A love that extends even to those who hate you and hurt you. A love that forgives murderers and re-imagines enemies as candidates for grace.

Suddenly, the legacy and courage of the younger Dr. King makes sense. In the son, we are seeing what the father is like.

Scripture gives many names to Jesus. Isaiah calls him the Wonderful Counselor, Prince of Peace, Immanuel. Malachi calls him the Refiner’s Fire and Messenger of the Covenant. Jeremiah sees him as the Righteous Branch of David’s line. But in Luke 2, the angel Gabriel says we will call him the Son of the Most High God.

Because he is the Most High God, he is utterly above and beyond us in every way—holiness ablaze and untouchable. How could we ever know him? Through the Son. Paul claims that Jesus is the image of the invisible God. In other words, in the Son, we are seeing what the Father is like.

The revered missionary to India, E. Stanley Jones, put it this way:

“If God thinks in terms of little children as Jesus did, cares for the leper, the outcast, and the blind, and if his heart is like that gentle heart that broke upon the cross, then he can have my heart without reservation and without question. The greatest news that has ever been broken to the human race is the news that God is like Christ. And the greatest news we can break to that non-Christian world is just that—that the God whom you have dimly realized, but about whose character you are uncertain, is like Christ.”

Mr. Jones said it right. The grand news from Gabriel is that our salvation will be called the Son of the Most High God. And in this Son we will see what the Father is like.

Son of the Most High God, show us what the Father is like. And by your grace, make us like him too.