Do You Believe in the Total Depravity of All Humanity? - Seedbed
close
Menu

The high priest said to him, “I charge you under oath by the living God: Tell us if you are the Messiah, the Son of God.”

64 “You have said so,” Jesus replied. “But I say to all of you: From now on you will see the Son of Man sitting at the right hand of the Mighty One and coming on the clouds of heaven.”

65 Then the high priest tore his clothes and said, “He has spoken blasphemy! Why do we need any more witnesses? Look, now you have heard the blasphemy. 66 What do you think?”

“He is worthy of death,” they answered.

67 Then they spit in his face and struck him with their fists. Others slapped him 68 and said, “Prophesy to us, Messiah. Who hit you?”

Do we have any idea of the depths of human depravity? It’s not hard to look out across the landscape of humanity spread out across time and space and see the compounded darkness of it all. We are not fundamentally “good people” who happen to foul out every now and then. We, the human race writ large, and every single one of us who make it up, are totally depraved.

This scene we see playing out before us offers us a horrifying snapshot of depravity. They have engineered a mockery of a trial designed to get the verdict with which they began. Listen to their unified pronouncement:

“He is worthy of death,” they answered.

In their minds they were not killing the Son of God. In fact, that was the furthest thing from their minds. They were sentencing a misguided man to death for the crime of blasphemy. They were following the Word of God. This was completely biblical; nothing short of the will of God. Case closed.

And then this: Then they spit in his face and struck him with their fists. Others slapped him and said, “Prophesy to us, Messiah. Who hit you?”

Here is depravity on display. These fine, upstanding, righteous and honorable men in the land give us a snapshot of the depths of depravity in the human heart. They are killing God in the name of God.

If only we could just leave it there. We must move to this question: Do you have any idea of the depths of your own depravity? Far more insidious than the unbridled depravity in the world is the unchecked depravity among the people of God. We want to identify ourselves with the woman who wasted the expensive perfume on Jesus, and thanks be to God we are becoming this kind of people. At worst, we will admit to being one of those fleeing disciples. We almost categorically refuse to see ourselves as the actors at Caiphas’ house on that fated night—those men who spit in Jesus’ face and hit him with their fists and slapped his face, mocking him with their jeers or worse, those who stood by and watched it happen.

Do you realize we are capable of this—that this kind of depravity dwells within us? Do I realize I am capable of this? I don’t think I believe it. In these days leading up to the crucifixion of Jesus we see the sheer unadulterated wickedness of the human race coming straight from the so-called “people of God.” It’s easy to spot it back then. It’s another thing to come to grips with this here and now. We must. Those of us who will not are among the most dangerous of all.

Fortunately there is only one thing stronger than the depravity of the human race: the love of God in Jesus Christ. He is able to transform human depravity into Divine Love. The power of the grace of God is to the force of human depravity as the Sun is to the Moon. There is no contest.

Therefore, there is now no condemnation for those who are in Christ Jesus, because through Christ Jesus the law of the Spirit who gives life has set you freefrom the law of sin and death. Romans 8:1-ff

Lord Jesus Christ, Son of God, have mercy on me a sinner. You have defeated depravity. Would you now set me free from its every last shadow. Grant me the grace of brutal honesty, not self condemnation, but a Holy Spirit empowered confession that your grace would become ever more prevalent and powerful in my life. Please, Lord, work with me. For your name, Jesus. Amen. 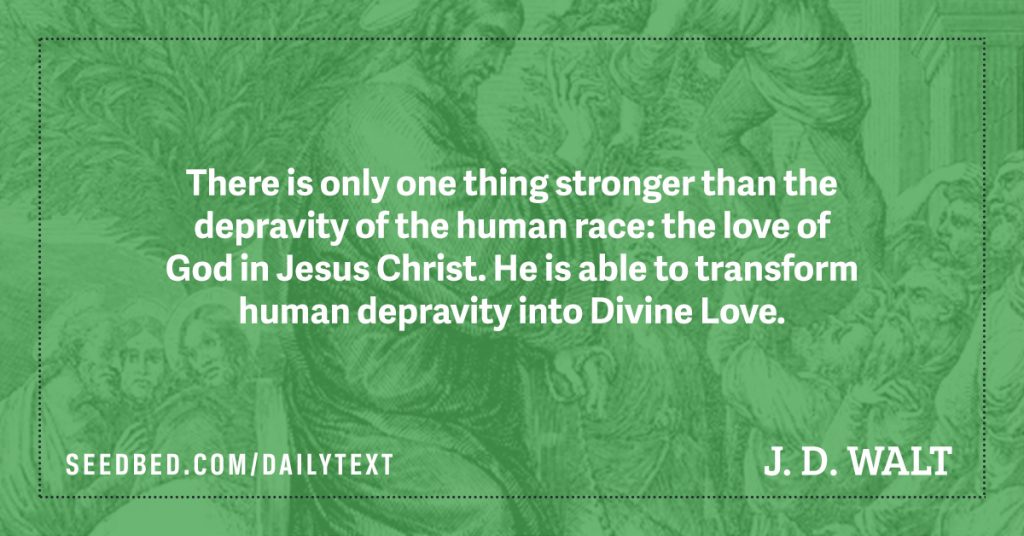 1. Do you struggle with this claim about the total depravity of the human race? (For you theologues out there, belief in the T. of T.U.L.I.P. doesn’t a Calvinist make). ;0)

2. Have you come face to face with the depravity in your own mind and heart and your capacity for doing wickedness?

3. How is it going in your life? Is the defeat of depravity by the grace of God becoming realized and actualized in you?