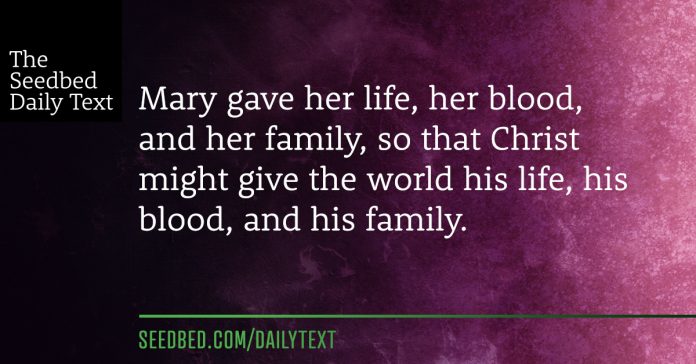 In the sixth month of Elizabeth’s pregnancy, God sent the angel Gabriel to Nazareth, a village in Galilee, to a virgin named Mary. She was engaged to be married to a man named Joseph, a descendant of King David. Gabriel appeared to her and said, “Greetings, favored woman! The Lord is with you!”

Confused and disturbed, Mary tried to think what the angel could mean. “Don’t be afraid, Mary,” the angel told her, “for you have found favor with God! You will conceive and give birth to a son, and you will name him Jesus. He will be very great and will be called the Son of the Most High. The Lord God will give him the throne of his ancestor David. And he will reign over Israel forever; his Kingdom will never end!”

God was coming to earth and the first person he told about it was a teenage girl.

The major movements of our faith have always begun with God revealing himself to one person. We see this pattern in the stories of Abraham, Jacob, Moses, and David. As God prepared to enter into the world himself, he again began with one person. However, this time he chose not to reach out to a tribal leader, or to a person with influence in the government, or to a future king.

For this most important and final revelation of himself, he entered into the life of a young, inexperienced, country girl.

Throughout Israel’s history, people had been called friends of God and children of God; Israel had been described as the bride of God.

But no one had ever been invited to become the mother of God until Mary.

The Christ who sits at the right hand of God today is still Mary’s son.
Jesus looks like Mary. He still carries her DNA. He walks like her ancestors.
And because Jesus resembles her, he also resembles us.

Because Mary shared her humanity with Jesus, we now have a divine advocate in heaven who knows what it’s like to be human and who can empathize with everything that we face (Mary is the one who “gave God her humanity, so that he could become human, become one of us” writes Andrew Louth, p. 118).

This is the gift Mary gave to us. She gave her life, her blood, her family, so that Christ might give the world his life, his blood, and his family. The great meeting of the human and the divine took place in Mary’s womb and we are all forever changed because of her.

Funny story, I remember being jealous of Mary when I was a young teenager. I was jealous of the special relationship that she had with Jesus. I remember thinking how holy she must have been since she was chosen to be Jesus’ mom. Acutely aware of just how unholy I was, I felt ashamed that I wasn’t more like her.

What I didn’t understand was that Mary was a regular teenage girl, just like me.
Mary also needed Jesus to be her savior.
Even Mary needed grace.
In fact, her story is a word of good news to all of us.

In Mary we see that it’s possible for a normal human being to bear God.

Today, the same grace that Mary received is bestowed upon you and me through Mary’s son.

These words weren’t only meant for Mary.
They are also spoken to us.

Look at yourself in the mirror.

See yourself as the fully human person that you are.

Mary received the favor of God in her life by sheer grace, and so do we.

In this world, you and I are the face of God.
Having received this privilege, we truly are favored ones.

May we receive these words for ourselves today.
May we rejoice in these words as they are spoken to us today:

God of goodness and light, help me to receive your gracious favor over my life today.