Following Jesus: Are You a Fan or a Friend? - Seedbed
close
Menu 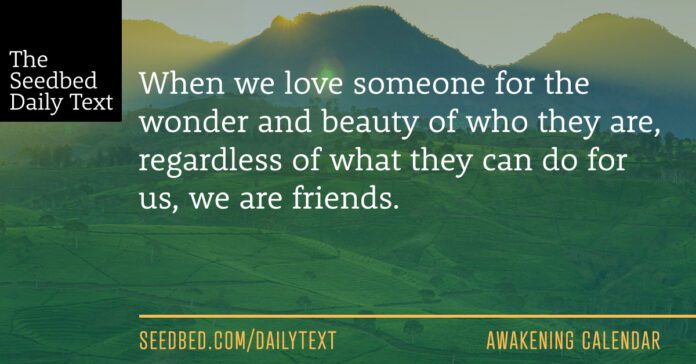 43 Jesus sent him away at once with a strong warning: 44 “See that you don’t tell this to anyone. But go, show yourself to the priest and offer the sacrifices that Moses commanded for your cleansing, as a testimony to them.” 45 Instead he went out and began to talk freely, spreading the news. As a result, Jesus could no longer enter a town openly but stayed outside in lonely places. Yet the people still came to him from everywhere.

What is in the mind of Jesus that would cause him to strongly warn the cleansed and healed leper with these words?

“See that you don’t tell this to anyone.”

It seems like word of this spreading would help Jesus in his mission. That is how my mind thinks. Fame works. Do something great or wowing or somehow significant and you become famous and your fame can be used as a platform for just about anything you want.

I’ve known a few famous persons, and truth be told, they tend to be among the most lonely and isolated people on the planet. They are profoundly admired yet hardly known. The crazy thing about fame is the way it extends to those who get close to it. Don’t you think this leper became a bit famous himself? This news was destined to spread. And look what happened to Jesus as a result.

As a result, Jesus could no longer enter a town openly but stayed outside in lonely places.

Once a person becomes famous the only real friends they have are the ones they made before they became famous. They can never really know if they are loved just for who they are and not for what they have done, do or can do for you. Famous people are long on fans, but they tend to be short on friends. It’s why superheroes have alter-ego hidden identities.

Why didn’t Jesus want to be famous? I think he was looking for friends, not fans. It’s why fame is a non-value in the Kingdom of God. It’s why the whole concept of a Christian celebrity is the ultimate oxymoron.

In other words, if he did something spectacular for you and asked you to keep it a secret, would you do it?

Early Joe is faring pretty well through Covid-19. He says thanks for the prayers. And a bonus—I’m working on getting the recipes for Mom’s Chicken Spaghetti and Cream Cheese Pound Cake!

DON’T FORGET:  1. Reserve your complimentary ticket for A Night with New Room: Ash Wednesday. 2. Check out the 2021 Awakening Calendar. 3. Grab a songbook for Soundtrack.

© Seedbed 2021
Following Jesus: Are You a Fan or a Friend?
MORE STORIES