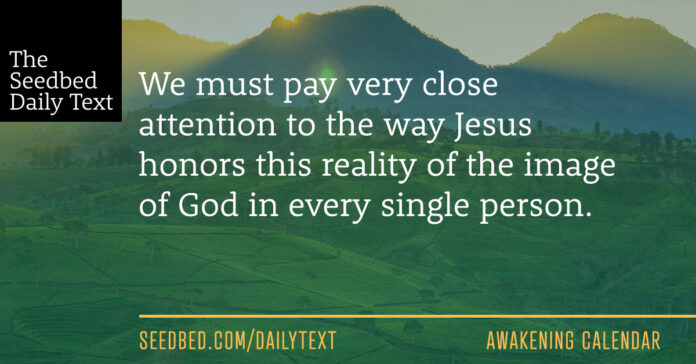 21 They went to Capernaum, and when the Sabbath came, Jesus went into the synagogue and began to teach. 22 The people were amazed at his teaching, because he taught them as one who had authority, not as the teachers of the law. 23 Just then a man in their synagogue who was possessed by an impure spirit cried out, 24 “What do you want with us, Jesus of Nazareth? Have you come to destroy us? I know who you are—the Holy One of God!”

Today’s text finds him going to an ordinary synagogue on an ordinary Sabbath day. He goes into a crowd of people, as he so often does, and he winds up dealing with a person. To be sure, it is quite a scene for the First Methodist Synagogue.

Maybe you are like me. I often don’t see “persons” (singular). I see “people” (plural). I go into a crowded place and see many people and pay attention to none of them. And when I do see “persons” I tend more to look at (or watch) them than to see into them. Jesus goes into places filled with people and he winds up dealing with a person. Why? Because every single person is created in the image of God and loved by God. We must pay very close attention to the way Jesus honors this reality of the image of God in every single person.

For Jesus, persons were never an interruption. They were why he came. They are why he is still here. Not causes or missions or movements, but persons. Every single person. Notice, though, he doesn’t deal with everybody. Just somebody.

This is his mindset. In the same way he did this in Cana and Capernaum and Nazareth he wills to do it in and through us in Dumas and Peoria and Nashville and (fill in your town).

I’ll close with a story I remembered about the celebrated Trappist monk, Thomas Merton. It is known as his great epiphany. He was running errands one day in downtown Louisville, Kentucky, when this happened.

In Louisville, at the corner of Fourth and Walnut, in the center of the shopping district, I was suddenly overwhelmed with the realization that I loved all these people, that they were mine and I theirs, that we could not be alien to one another even though we were total strangers. It was like waking from a dream of separateness, of spurious self-isolation in a special world . . .

This sense of liberation from an illusory difference was such a relief and such a joy to me that I almost laughed out loud. I have the immense joy of being man, a member of a race in which God Himself became incarnate. As if the sorrows and stupidities of the human condition could overwhelm me, now that I realize what we all are. And if only everybody could realize this! But it cannot be explained. There is no way of telling people that they are all walking around shining like the sun.

Then it was as if I suddenly saw the secret beauty of their hearts, the depths of their hearts where neither sin nor desire nor self-knowledge can reach, the core of their reality, the person that each one is in God’s eyes. If only they could all see themselves as they really are. If only we could see each other that way all the time. There would be no more war, no more hatred, no more cruelty, no more greed. . . . But this cannot be seen, only believed and ‘understood’ by a peculiar gift.

Almighty God—Father, Son and Holy Spirit—my Lord Jesus Christ, thank you for seeing me. In the midst of so many people, you see me. You see every single person, Jesus. Wake me up to this reality, not in an overwhelming way, but in a simple way. Wake me up to this the next time I am in the grocery store and open the eyes of my heart to begin to fathom your image—not in all of the people—but in just one person. To simply be aware will be a start. For your loving awareness of just one single person to be awakened in me will be a start. I pray in your name, Jesus, amen.

Is this connecting with you? Do you identify with this? How will you see the cashier at the next grocery store counter you come across? No pressure to do anything, just “see” them for who they most deeply are.