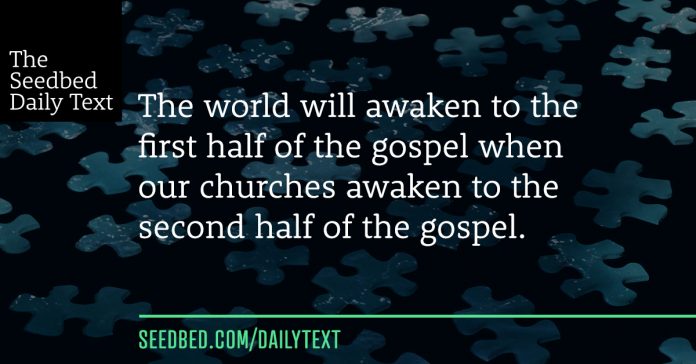 For this reason I, Paul, a prisoner of Christ Jesus on behalf of you Gentiles— 2 assuming that you have heard of the stewardship of God’s grace that was given to me for you, 3 how the mystery was made known to me by revelation, as I have written briefly. 4 When you read this, you can perceive my insight into the mystery of Christ, 5 which was not made known to the sons of men in other generations as it has now been revealed to his holy apostles and prophets by the Spirit. 6 This mystery is that the Gentiles are fellow heirs, members of the same body, and partakers of the promise in Christ Jesus through the gospel.

What a phrase: the stewardship of God’s grace that was given to me for you.

If I’m honest, and you know I try to be, I typically think of “the stewardship of God’s grace that was given to me—for me. Isn’t that the point of amazing grace—”I once was lost but now I’m found; was blind but now I see.” This, of course, is true as it comes to the first half of the gospel.

But this phrase, the stewardship of God’s grace that was given to me for you,” is all about the second half of the gospel. While I’m on the topic, let me flesh this first half, second half distinction out a bit more.

First Half: Justification. Second Half: Sanctification

First Half: The New Birth. Second Half: Fully Mature

First Half: Lord you took me out of Egypt. Second Half: Now take Egypt out of me.

First Half: I am loved by God. Second Half: I am becoming the Love of God.

You see the point don’t you? It’s those brothers and sisters who press on into the second half of the gospel who steward the grace of God for the sake of those who haven’t yet entered into the first half. This is precisely Paul’s point with respect to the Gentiles.

Abba Father, we thank you for your son, Jesus, who reveals to us the fullness of grace as both a gift to receive and a gift to give. Would you teach me this way of stewarding the grace given to me for the sake of others? We pray in Jesus name, amen.