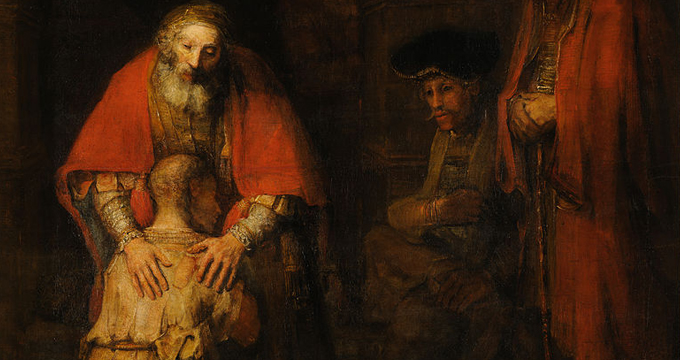 While recognizing that God’s emotions are too complex to fully understand, Chad Harrington attempts to paint the picture of two vignettes that reveal two of God’s emotions: anger and compassion.

It’s easy for thinking, rational people to avoid emotions. Even the word “emotional” tends to be a negative word in our world today. We don’t like to mess around with emotions because they tend to get in the way of getting stuff done in life. Plus, we like to keep our composure. Even in church settings, getting too “emotional” isn’t usually a positive term. So we avoid emotions.

But God is Emotional

But does God have emotions? This is difficult for us to imagine, because we tend to associate emotions with our senses—we literally feel our emotions in a physical way. God is Spirit, though, so how can he feel emotions?

I don’t know how, but I know that he does, indeed, have emotions, because it’s scattered throughout Scripture. And we cannot dismiss his emotions as mere anthropomorphisms, because that would miss the point. Somehow, God as a person has emotions, and he expresses them primarily with regard to human beings. That means, we will do well to learn about how he feels toward us.

God’s emotions are far too complex to fully understand and explain, but I want to paint the picture of two vignettes that reveal two of God’s emotions. The first is a picture of God’s anger, the second is a picture of his compassion. These two emotions—one seemingly negative and the other positive—provide a framework for God as an emotional person.

The first picture comes form the book of Judges. We read these words: “They left the LORD and served the other lords around them, so the LORD’s nose burned against Israel” (2:13-14).

The phrase, “the LORD’s nose burned,” is my translation of a common Hebrew idiom. [1]  I like this wooden translation of this idiom because it gives a picture to how God feels. (The picture is like a angry cartoon character who turns red from head to foot with steam coming from the top of their head.) Again, the image is not literal, but neither is it meaningless. Somehow God, as a person, was actually upset.

He was angry because his people left him for someone else. Israel’s fearless leader, Joshua—who brought them into the Promised Land—had just died, and the next generation didn’t do so well. It says that “they did not know the LORD or the thing which he had done for Israel” (2:10). After the hustle and bustle of settling into a new territory, they relaxed and forgot the one who gave them the land in the first place. God’s reaction was holy and just: “He gave them into the hands of robbers, and those people took from them. He sold them into the hand of their surrounding enemies. They were no longer able to stand” (2:14). This story provides us with at least three reflections on the emotions of God.

First, it shows that God’s anger is real.

The people left God, and faced practical consequences for their sin. They no longer had an abiding relationship with God, so they were left to fend for themselves. God “gave them over to what they wanted,” as Paul said, and they suffered for it (Rom. 1:24, 26, 28).

Second, it shows that God’s anger is really an expression of love.

The reason he got angry was because he was disturbed by their unfaithfulness. In a committed human relationship, if one person doesn’t get upset when the other person leaves, it means they don’t care about the relationship. However, God was not unaffected—he was upset with Israel. He loved her.

It means, third, that God’s anger is different than human anger.

Our anger John Wesley says, “Had God never been angry, He could never have been reconciled.” [2]  God’s anger is actually good in the end, because he’s not vindictive—he’s fighting for an authentic relationship with his people. He can’t be real with them if he puts up with evil. Ken Collins further describes Wesley’s view of God’s wrath as a “ongoing, determined opposition to evil.” [3]  In other words, the picture of God, who is hot with anger, is really a vignette the God of “holy love.” [4] But that’s only half of the story. The other side of God’s emotions is compassion. He felt so deeply for his people that he was willing to die for them. In fact, we see that side of God not only in the New Testament, but in this very text.