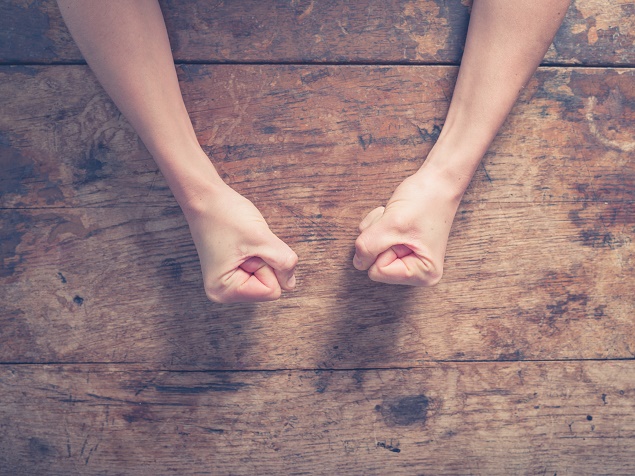 In the past five years or so, the “messy bun” has become the trend for women’s hairstyles in my generation. I used to look very critically at the women I saw with hair so disheveled it looked like they just rolled out of bed. I often wondered to myself whether they were brushing their hair at all, or if they were using a hay rake. Usually, it was the artsy, creative types that seemed to be the worst offenders.

But, I’m one of those artsy creative types. There is no denying it, no matter how hard I try.

This is a truth that was not always so outwardly apparent as it is these days. For the past four years, I have been deep in a process of discovering my most authentic, true self. As a survivor of childhood abuse, as well as a victim of intense bullying and sexual harassment, I learned to keep my personality carefully concealed. I didn’t make eye contact with others, and I kept my mouth shut and my head down. I also kept a tight rein on my clothing, my hair, and pretty much every other aspect about me. I was constantly concerned about adding fuel to the fire or giving someone a “reason” to verbally or physically assault me. It’s sad that our society trains women to think that way. But, despite my best effort, assault still occurred. I guess all those things I was told to do by our society—for the sake of not drawing attention to myself—didn’t work after all.

I’m not always consciously aware of the ways the trauma affects my behavior and thought patterns. But, these things always leave an imprint on us. Mine often comes in the form of needing to keep control of everything.

But, the things in us that we hate the most are often the very same things we judge most harshly in others.

Despite my disgust over out-of-control hair, God worked in my heart. The more I saw my peers with their messy hair, the more I began to envision my nieces when they were small. In my mind’s eye, I could see them come running up to me, hair gone wild, faces smudged with dirt, finger paints, or chocolate. Messy began to be redefined in my heart as freedom. I began to consider what harm could possibly come from allowing myself some freedom—freedom to be authentically, unapologetically, me.

With those thoughts came a problem. I was not even sure that I knew who the authentic me truly was. I had played the role I thought was expected of me for so long, I didn’t know the counterfeit from the truth in terms of my own personality!

Prior to this transition in my life, I would never have described myself as creative at all. The crack in that wall came when I discovered my writing ability, but the wall began to crumble when I discovered my talent in painting. As I grew, I loosened my tight-fisted grasp on control, and I began to see my true self be called forth into life. Gradually, I began to see there was even a change in my clothing preferences. Without consciously thinking about it, I began to wear more artsy and flowy clothing. Then, I began to change the way I cared for my hair. I stopped highlighting it and let it grow out from the short haircut I had been getting. I stopped flat-ironing it straight. Then, I stopped using all the products I used to keep every strand neatly in place.

As my heart and spirit changed, I allowed my hair to become what it wanted to be. As it lengthened and became unburdened with the heaviness of all I put on it to keep it under control, my natural curls began to fill out and shine. The body and volume of my hair came back, and it appears healthier than it has in many years.

Then, one day, I looked in the mirror and saw myself for what felt like the first time, and what I saw was a beauty that can only come from untamed truth.

Patricia Taylor is Editor of Soul Care Collective and a member of the Seedbed Farm Team.