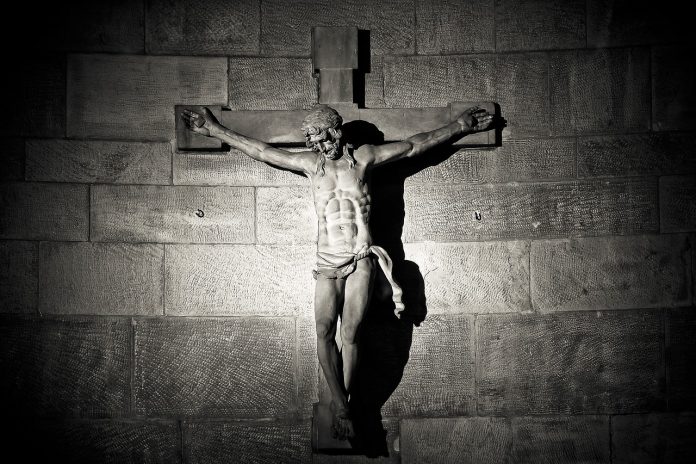 There are some hints within Scripture that tell us something about why Christ’s execution is different from the others throughout human history. Hundreds of years before Jesus, a prophet named Isaiah wrote of a so-called Suffering Servant who would take upon himself the sins and hurts of God’s people in order to bring about redemption.

The Servant would be “pierced for our transgressions”; he would be “crushed for our iniquities”; and his “punishment” would bring us peace. He would be cut off from the land of the living, and be assigned a grave with the wicked, though he had done no violence. But this would be no random, senseless death. According to Isaiah, the Servant’s death would be a kind of sacrifice—an act of atonement for all the evil and violence that had seeped under the door into God’s good world. It would be as if this Servant were actually taking all the ugliness onto himself so that the penalty for sin might be averted from God’s people. It would be as if he were throwing himself on the grenade and absorbing the explosion (see Isaiah 53).

Yet this picture of Christ’s death raises questions. For instance: How does the punishment of an innocent person fix anything for the guilty? How is that good news? To use a loose analogy, if I get busted for a serious crime, say, beating my wife or defrauding the elderly, how does it solve anything if Mother Teresa (or some other exemplary person) agrees to go to jail on my behalf? You might say that this solution sounds even worse than the crime itself.

So what qualifies Jesus to take the rap for us? Perhaps the beginning of an answer can be traced back to where this chapter began, with the idea of an author stepping into the artwork in order to relive the human drama in our place. Think of it like this: to change the course of any story, one needs not only a writer but a character as well. And as the God-man, Jesus fills both roles. Because sin is first and foremost a crime against God, it is only as God himself that Jesus can conquer and forgive it. Yet because death was a penalty for human sin (Adam’s and our own), it is only as the true Adam (the representative of the entire human race) that Jesus can step into the void on our behalf (Romans 5:12–15).

Christ may rightly bear our penalty because somehow all humanity is bound up with him through a mysterious connection. For this reason, Paul can even claim that he was “crucified with Christ” so that he no longer lives, but Christ lives in him (Gal. 2:20). To be united with Christ means that what happened to him has happened to us at some deep level—because we are joined together with him.

But what is the source of this mysterious connection? Perhaps it goes back to our origins. Because all humans were fashioned in Christ’s “image” (Gen. 1:26), the Son is the rightful head of the entire human race. And in the Bible, the head often acts on the behalf of the whole. We see a picture of this reality in the way a king might standing for his people—in their place—like David going out to meet Goliath on behalf of Israel. In modern terms, we see another loose analogy in the way the head of a company may willingly take the fall for a wrong done by a low-level employee. In the Bible, the people are bound up with their head. And for this reason, Christ may rightly pay the penalty for human evil—enduring even the ultimate exile (death) on our behalf. In so doing, he not only pays the price for sin, he also wins the victory as he conquers it. In so doing, he also sets the ultimate example of love that calls forth imitation.

John’s gospel paints a heart-wrenching portrait of this very truth. Toward the end of John’s narrative, a bruised and bloodied Jesus is trotted out before a mob. He is clad only in a silly purple cloak and a thorny crown. They are mocking him. “Here’s your poser-king!” is the intended jest. “Here’s the fool who thought he could take the throne!” Yet even here, amid the mockery, Pilate’s introduction of the dress-up king says it all. In the Latin language, his statement can be boiled down to just two words: Ecce homo. “Behold the man.”

He doesn’t ask them to behold a man. He says, behold the man. Behold the human. And without knowing it, the Roman thug has identified Jesus for who he really is. He is the true representative of the entire human race. He is the true Adam whose actions will affect the world in an even more dramatic fashion. He is also the true Israel who will now fulfill the calling of the covenant. Behold the man. And behold the king! Like David his forefather, Jesus is going to battle without armor, on behalf of the people, and their fate is bound up inextricably with his own. This is the fight we’ve been waiting for. It is the decisive battle to secure salvation for God’s people. Behold the man!

In the searing image of a bloody king, we begin to glimpse the true meaning of the cross. There is love and logic there, if only in hints and hushed whispers. The cross is where God acted decisively to deal with the evil infecting his good creation. He acted. And he did so through the only vessel strong enough to bear the blow: his Son, the second Adam, the Author-Actor who did what only God could do and paid what only man could pay. Behold the man!

This is but one facet of the cross’s meaning. It was the field of combat where an unlikely revolutionary—God in human flesh—secured the Creator’s victory for all time. What happened there dwarfs our theories and defies our every attempt to distill its meaning. Yet if we believe the Scriptures, the crushing, freeing claim of the Bible is that one dark Friday, the Author of God’s plotline allowed the cruelest twist of plot to waste itself on him. And because of this, the early followers of Jesus came to believe that in a very real sense, evil had been swallowed up in love. It is paradoxical that we could live forgiven  because God died condemned. It is madness in a way. Yet as even Nietzsche knew: “There is always some madness  in love. And there is always some reason in madness.”

The cross reminds us this is true. It tells us that our sin is serious. It is so ugly that God would have to die to make it beautiful. But the Jesus chapter in God’s story doesn’t end just yet. 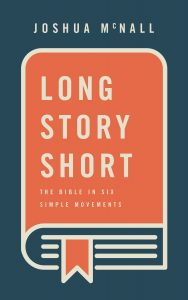 This article is an except from Long Story Short: The Bible in Six Simple Movements by Josh McNall. The study is perfect for: 1) Newcomers classes 2) College or Young Adult Ministry 3) Home groups 4) Neighborhood Bible studies 5) Sunday School. As you walk through this book, you will: Learn the big story of Scripture as a seamless whole; engage with a highly readable book; be challenged to think about familiar stories of the Bible in fresh ways. | “Joshua McNall in his engaging and witty little book Long Story Short, can help you understand the storied world in and of the Bible, and perhaps more importantly help you understand how actually you are in the story, and you must embrace it as yours.” (Dr. Ben Witherington III) Get the book + DVD or streaming from our store here.