How the Gift of Assurance Works - Seedbed
close
Menu 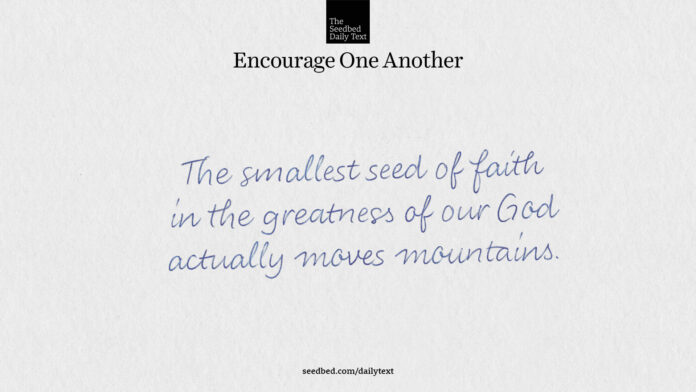 During that night the Lord said to Gideon, “Get up, go down against the camp, because I am going to give it into your hands. If you are afraid to attack, go down to the camp with your servant Purah and listen to what they are saying. Afterward, you will be encouraged to attack the camp.” So he and Purah his servant went down to the outposts of the camp.

So Gideon sent the rest of the Israelites home but kept the three hundred, who took over the provisions and trumpets of the others.

This is a story about God.

The Midianites, the Amalekites and all the other eastern peoples had settled in the valley, thick as locusts. Their camels could no more be counted than the sand on the seashore.

Yes, this is a story about God.

I wonder what you are facing right now and just how overwhelming the odds may be against you. You are likely tempted to try to win the war in the way the world would tell you the war must be won—by trying harder, by digging deeper, by building security and strength and all the other things. Perhaps someone is telling you that all you need is more faith; that somehow you are not believing enough. Let me be emphatic about this next statement:

All of that is wrong.

Truly I tell you, if you have faith as small as a mustard seed, you can say to this mountain, ‘Move from here to there,’ and it will move. Nothing will be impossible for you.” (Matthew 17:20)

The point being, it is not about the quantity of ones faith. It is about the nature of ones God. The issue is in whom our faith is placed. Jesus chooses a seed so small it could hardly be seen in order to say, in essence . . .

And look how good God is.

If you are afraid to attack, go down to the camp with your servant Purah and listen to what they are saying. Afterward, you will be encouraged to attack the camp.

Notice the transformation afoot in Gideon. Gideon is not asking for more signs. Instead God is encouraging Gideon with assurances. This is how it is supposed to work. God calls us to faith. Faith does not ask for a sign but rather simply obeys God. In response to obedience, God gives assurance to faith. This raises faith even higher. Now look what happens when Gideon acts on God’s assurance.

Gideon arrived just as a man was telling a friend his dream. “I had a dream,” he was saying. “A round loaf of barley bread came tumbling into the Midianite camp. It struck the tent with such force that the tent overturned and collapsed.”

His friend responded, “This can be nothing other than the sword of Gideon son of Joash, the Israelite. God has given the Midianites and the whole camp into his hands.”

When Gideon heard the dream and its interpretation, he bowed down and worshiped.

How awesome is that?! Pay attention here. Gideon is worshipping God not based on the success of the mission, but on the gift of God’s assurance. It is as though God’s encouragement to Gideon through this gift of assurance is as good as the victory itself. This is real faith, people. This is the faith that pleases God.

And without faith it is impossible to please God, because anyone who comes to him must believe that he exists and that he rewards those who earnestly seek him. (Hebrews 11:6)

If you are out on a limb for Jesus, and I know many of you are, be encouraged—your faith pleases God very much. Take delight in his delight in you. Bow down and worship him now.

Come let us worship and bow down. Let us kneel before the Lord our God, our maker. For he is our God, and we are the people of his pasture and the sheep of his hand. (Psalm 95). Thank you Jesus for this great mystery of faith. The smallest seed of faith in the greatness of our God actually moves mountains. Thank you for not making it about my faith but about your greatness and glory. Come Holy Spirit and show me how to live in this place of faith all the time. In Jesus’ name, Amen.

Where are you needing assurance in your faith about now? Are you seeing the difference between asking for a sign before you have faith and receiving assurance after the obedience of faith. How would you articulate that? Can you tell a story of it?

© Seedbed 2021
How the Gift of Assurance Works
MORE STORIES