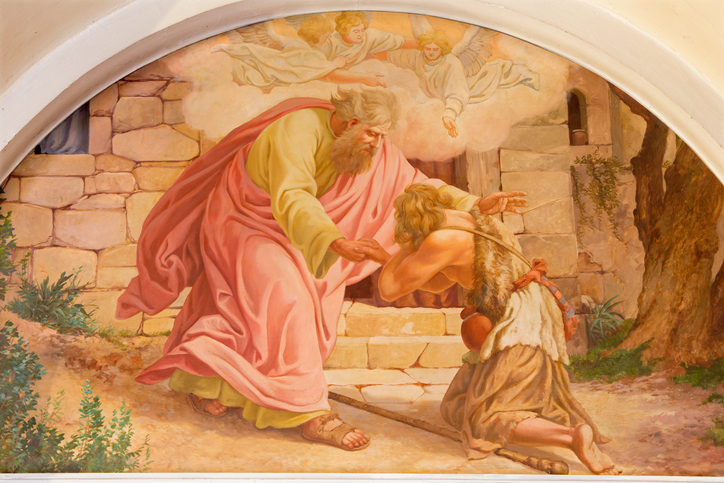 I’m a pastor in my 30’s with very young children. Right now, my children are covered by grace; little sources of amusement and mischief. Yet I have the same worry that arises in all Christian parents: what if my children go astray?

As a pastor, I have the unfortunate opportunity to experience the reality that many people’s children have left the faith. Some parents cope by denial or blaming former pastors. Other parents are completely honest about their children’s separation from God. Yet, each of the parents are grieving in some way as their children, whom they love, are not spiritually where the parents thought the children would be at this point.

If we examine the parable of the Prodigal Son in Luke 15, we must realize some things. Yes this parable is both a proclamation of God’s love for Gentiles and a rebuke of the Pharisees. However, let’s look at this parable from the perspective of the Father (God) whose children have gone astray.

The first response of the father is to willingly receive insult and injury at the hands of the youngest son. By requesting an inheritance before the death of the Father, the son was heaping insult upon the father. According to the culture at the time, the son would be declaring himself dead to the father. Furthermore, the only way a child could legitimately request an early inheritance was when there was some legal grievance the Father had committed. Usually this type of case would involve a magistrate deciding if the son had legal cause. So all of the Father’s neighbors and friends would think the Father had committed some harm to his son and the payment was admission of guilt. The Father, in this parable, willingly takes the insult to his character and the injury of losing 1/3 of his estate.

The second response of the Father is to not enable his son’s sins. The father, just like God, did not stop his son from exercising free will. Yes he made the initial inheritance payment, but we never see the Father giving his son any more money. No servants follow the son into a faraway country, paying for the wild living. When we enable others to sin, we participate in their destruction. The father acted in such a way that he was blameless in his son’s sins.

Beyond this, the father actually lets the son hit the complete rock bottom. When the son ran out of money, a famine hit which left the prodigal desperate and starving. Verse 16 says no one gave him anything. Whatever friends he gained during his wild living now abandoned him. The father did not send anyone to make sure his son had a roof over his bed, food in his belly, or a bed to sleep in. What was the result? It was not until the son was in great physical need that he realized his great spiritual need. The son here actually proclaims he has sinned against heaven and his father. Hitting rock bottom made the son realize his sin. Hitting rock bottom was a gift from his father.

The fourth response of the Father is to celebrate the return of his repentant son. Some people will go out and destroy their lives and know that their parents will never let them starve or face the full consequences of their sin. As long as their parents continue to bankroll their sin, they never hit rock bottom. Instead, the prodigal son is repenting and the Father embraces his son, and celebrates his son’s return – even stopping the planned speech begging for forgiveness. The father was so quick to forgive that he actually stops his son’s speech in the middle and calls for a party to be organized.

When those whom we love truly return home, seeking to be right with God and with others, we should celebrate, heaping love on them rather than shame. We don’t hold it over their head or remind them of it all the time, we celebrate – even though we’ve been insulted and injured.

Finally, the Father then tries to repair the relationship between the older and the younger son. When people go astray, they damage many of the relationships in their lives. The older son is upset that his own faithfulness is not getting celebrated while his brother gets a party despite all the pain he’s caused. The father doesn’t pretend that there are no consequences for his son’s rebellion. But he does try to help the son pick up the pieces.

Remember the order of the Father’s responses: bear the insult, refuse to enable, celebrate their restoration, and help them pick up the pieces. Yet as this is a parable, we should also remember that this is how God treats us.

1) He loves us so much that he lets us exercise free will, even when we choose to sin against God in our freedom.

2) He never enables us to sin. He does not put his hand and his Spirit towards the evil works that we do.

3) More than that, God is not afraid to let us hit rock bottom so that we will realize our desperate need for him. For Paul, it was blindness. For David, it was the loss of a child. God loves us enough to let us fall.

5) And if we return, God celebrates. Luke 15:7 says that all of heaven rejoices when a sinner repents. It’s not that God doesn’t love the faithful. Realize that it’s better to never have experienced the pain of a life of rebellion than it is to get a coming home party, though the party helps us heal.

6) Finally, God does not erase the consequences, but helps us pick up the pieces.

Being a parent is never easy. May God give us the strength we need and heal our hearts if our children go astray. For help in guiding your children through spiritual growth, see Winfield Bevin’s Grow at Home: A Beginner’s Guide to Family Discipleship published with Seedbed.