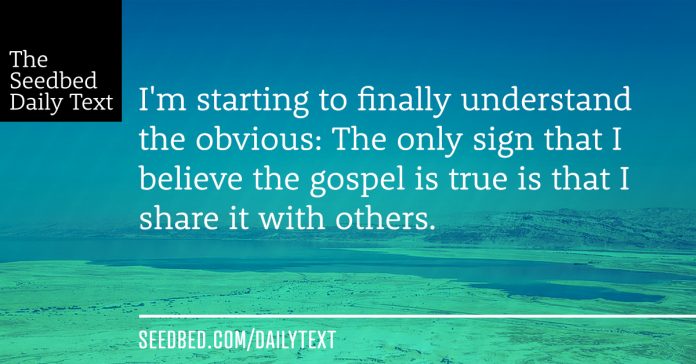 “Very truly I tell you Pharisees, anyone who does not enter the sheep pen by the gate, but climbs in by some other way, is a thief and a robber. The one who enters by the gate is the shepherd of the sheep. The gatekeeper opens the gate for him, and the sheep listen to his voice. He calls his own sheep by name and leads them out. When he has brought out all his own, he goes on ahead of them, and his sheep follow him because they know his voice. But they will never follow a stranger; in fact, they will run away from him because they do not recognize a stranger’s voice.” Jesus used this figure of speech, but the Pharisees did not understand what he was telling them.

I once heard a preacher opine in a sermon about how to tell the difference between a shepherd and a butcher. The shepherd leads the sheep to green pastures from the front. The butcher drives the sheep to the slaughter from behind. Whether accurate or not I do not know, but I do know it makes the point for today’s text.

The one who enters by the gate is the shepherd of the sheep.

Sure, people try all sorts of ways to get in. They climb over or blast through by way of their own righteous efforts or religious systems. While they think they are inside, they remain outside. The danger they pose is the way they try to lead other sheep to follow them in their futile ways of salvation (i.e.,  perfect observance of Sabbath and the hundreds of other laws). This effectively steals peoples’ freedom, destroys their faith, and otherwise enslaves them to an idol or false god.

Why does it bother people that there is only one way into the sheepfold? Why is that unfair? What if it is a simple fact? What if it is the truth? Why would we be angry at the truth? What might underly this anger? Might it be a sense of entitlement that we deserve to be on the inside? What if we don’t deserve to be on the inside? That would mean something like grace was at work—getting what we don’t deserve.

Wouldn’t it be a really good thing that there was even a single way to salvation? What if there was no way in? Wouldn’t it actually be an amazing thing that this single way of salvation was open to absolutely anyone and everyone who would enter in through this gracious gate? And wouldn’t it be the most extraordinary thing in the universe that this access to the sheepfold was not based on our own merits but was a free gift—that no one is entitled yet everyone is invited?

You want to know the gospel truth? This gospel is true. If you don’t believe it don’t say it’s not fair. Just own that you don’t believe it. The amazing thing about this gospel is Jesus still believes in you. He wants you in the fold. He has done everything he can, to the point of laying down his life, so you could be included. He will not decide for you. Only you can do that.

If all of this were true, wouldn’t it make sense that we would want to share this with the whole world? I’m starting to finally understand the obvious. The only sign that I believe the gospel is true is that I share it with others.

Abba Father, we thank you for your Son, Jesus, who is himself the brilliance of your grace. Awaken us to the truth about our own faith and make us gracious agents of awakening to others. We pray in Jesus’ name, amen.

1. Why do people consider it unreasonable that God would provide only one way of eternal salvation? Wouldn’t that actually be good news?

2. Do you believe Jesus is the only way to into the sheepfold of the kingdom of God? If not, why not?

3. Do you actively share this incredible truth with others? If not, why not? And what might your unwillingness to share with others tell you about what you really believe?