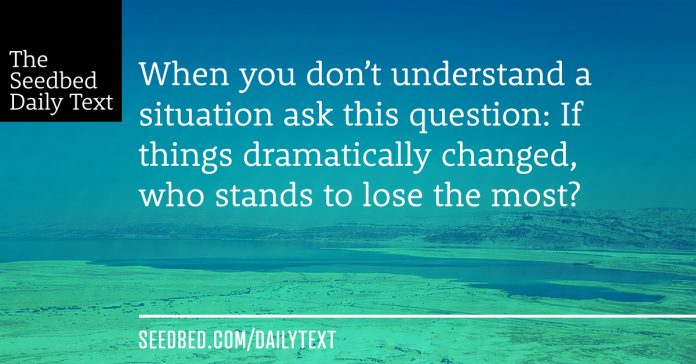 Some of the Pharisees said, “This man is not from God, for he does not keep the Sabbath.”

But others asked, “How can a sinner perform such signs?” So they were divided.

Then they turned again to the blind man, “What have you to say about him? It was your eyes he opened.”

The man replied, “He is a prophet.”

They still did not believe that he had been blind and had received his sight until they sent for the man’s parents. “Is this your son?” they asked. “Is this the one you say was born blind? How is it that now he can see?”

“We know he is our son,” the parents answered, “and we know he was born blind. But how he can see now, or who opened his eyes, we don’t know. Ask him. He is of age; he will speak for himself.” His parents said this because they were afraid of the Jewish leaders, who already had decided that anyone who acknowledged that Jesus was the Messiah would be put out of the synagogue. That was why his parents said, “He is of age; ask him.”

When you are out to get someone, you are going to find a way to get them. Throughout John’s Gospel, there were multiple situations where we were told that the Pharisees and religious leadership were looking for a way to kill Jesus. They picked up stones on one occasion. They constantly sought to catch him in some kind of policy loophole. In today’s text, in response to the sensational healing of the man born blind, they alleged he was a Sabbath-breaker.

Was this really all about the Law? It seems a bit much. In situations like these, where things are hard to understand, there is a simple rule to apply. Look around and see who is benefiting most from the status quo, or the way things are. Another way of asking the same question: If things dramatically changed, who stands to lose the most?

This holds true in every organization, from local churches to multinational corporations. The reason things remain the way they are and always have been is because someone or some group is benefiting from them remaining that way. The other interesting question to ponder is this one: Who stands to benefit the most from change?

Abba Father, we thank you for your Son, Jesus, who brings to the world the great reversal of love, where the proud are brought down and the humble are lifted up. Open our eyes to corrupt systems of power, especially the ones that bring us gain, and give us the courage to stand up for what is right, even if it is against our self-interest. We pray in Jesus’ name, amen.

1. Analyze the situation from today’s text. Who does the status quo benefit? Who loses? What do the losers stand to gain if things change?

2. How does the present state of affairs in your own church benefit you? What most needs to change? What would you lose as a consequence of change? Who loses as a result? What would change mean for the losers?

3. With these Pharisees, is it really so much about policy or is it about power?