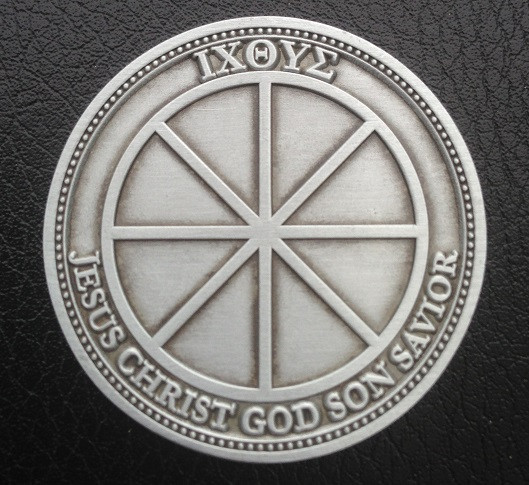 Most Christians know of the Fish symbol. In Greek IXOYE (Ichthus) is the word for  “fish.” For ancient Christians, though, it held deeper symbolism.

Iota is the first letter of the name Jesus in the Greek alphabet.

X, or Chi, is the first letter for “Christ.”

O, the letter Theta, is the first letter for the Greek term for God.

Y, or Upsilon, represents “Son,” and

E, or Sigma, is for Savior.

For many years following the crucifixion and resurrection of Jesus, the early Christians faced severe and sustained persecution. As a way of identifying themselves to one another upon meeting in a public place, one person would draw an arc on the ground in the dust. If the other was a follower of Jesus, they would complete the drawing with another arc forming the symbol of the fish. Now that you see how the fish sign connects to the word, “Ichthus,” consider yet another layer of mystery.

A few years ago, Mike and Louise Borden, a couple from a small Oklahoma town, took a pilgrimage with their church tracing the journeys of Paul. On this trip they went to Ephesus, in Turkey, and as they walked along the marble road leading into the ancient city, they noticed a large circle carved into one of the marble paving stones.  After inquiring, they learned this symbol was known as the Christian Wheel and that some historians believe the Christian Wheel preceded the fish symbol as the secret sign to followers of Christ. The wheel contains the letters IXOYE superimposed so that the result looks like an eight-spoked wheel.

The couple’s passion is finding simple, non-threatening ways to share Jesus with people who may not yet know him and helping others to do the same. They had the idea of creating a coin inscribed with the Christian Wheel such that people could easily share the coin and along with it, the story of Jesus. On the reverse side of the coin they inscribed the Chi Rho symbol, the sign Constantine reported seeing in the sky and the words given him, “In hoc signo vinces,” which translated means, “In this sign you will conquer.” The Emperor Constantine is included on the coin because in 312 A.D. he issued the Edict of Milan, which made Christianity a legal religion in the realm, thus ending the severe persecution of the early Christians. From Greek letters to Latin inscriptions to ancient rulers to the very Son of God, the coin is laden with story telling possibilities, as well as a daily reminder of the carpenter from Galilee.

It’s fascinating and ironic that a once ancient symbol used secretly between believers is now becoming a not so secret means of sharing Christ with those who don’t know him.

If you would like to learn more or perhaps get a supply of the coins for your own efforts at sharing Christ, check out his website here. Purchase the coins or other supplies on Seedbed here.

From ancient times to the present day, the followers of Jesus have found all sorts of ways and means to share him with others. Are you aware of any of these perhaps lesser known ways this has happened throughout history or in the present day? Please share with us in the comments.