24 When the ten heard about this, they were indignant with the two brothers. 25 Jesus called them together and said, “You know that the rulers of the Gentiles lord it over them, and their high officials exercise authority over them. 26 Not so with you. Instead, whoever wants to become great among you must be your servant, 27 and whoever wants to be first must be your slave— 28 just as the Son of Man did not come to be served, but to serve, and to give his life as a ransom for many.”

I must confess I cannot figure out what it is about these times in which we live that leads so many people to get so many tattoos. It’s fascinating to me. As recently as twenty years ago a tattoo was taboo. Today it is practically an accessory. So what does this have to do with today’s text? Not much really, but it did cause me to think about a new tattoo I would get if I did tattoos (which to date I have not). First, I would put it in a very visible place— not so others could see it but so I would be constantly reminded of its message—like the back of my hand or in place of a watch on my wrist. Here’s what it would say:

Jesus seemed to have these words tattooed on his heart. It was not something he did. It was his identity—who he was. Because he knew he was the beloved son of an adoring Father he was free to take on the nature of a bondslave when it came to his relationships with everyone else. Because he knew he was loved in the highest way, he could live, love and so serve others in the most humble way.

The issue, however, is not what I have tattooed on my skin but what is written on my heart. Here to serve is not a job description. It’s an identity. It’s a mentality; a mindset. It makes sense that the bible would call us to “have the same mind in you that was in Christ Jesus, who being in very nature God did not consider equality with God something to be grasped but made himself nothing; and taking on the nature of a slave, being made in human likeness, and found in the appearance as a man—he humbled himself and became obedient to death, even death on a cross.” Philippians 2:5-ff

Discipleship to Jesus is all about my participation with the work of the Holy Spirit, who wants complete access to my entire being such that he can write these words on my heart, make them my mind-set, and fill the bank account of my soul with the kind of love it takes to actually write those kind of checks with my every day life.

Here to serve. I’m going to be dwelling on that today and hopefully for the next year or ten—however long it takes. I’d like to join you in that kind of life.*

*Note: There is a way of being “here to serve” that comes out of our brokenness and is actually more of a co-dependent way of dealing with our anxiety and shame. It’s less serving and more “people-pleasing,” which is yet another one of those broken strategies we use to prop our false self up. At the root of this scenario is the lack of a sense of identity founded on being loved by God and feeling worthy of love from others. Jesus can heal this, and he will if you will participate. It will take time, but it will be worth it. There’s so much more to say about this. I simply wanted to note it in the record.

Heavenly Father, it occurs to me that the more I can know your love for me the more free I will be to be myself, which means I can love people for who they are and not from the deficit of who I am not. Father, I know that sounds complicated yet I also know it is very simple for you. I think I’m asking, as a dear friend of mine taught me, for you to help me to believe the truth about myself—no matter how beautiful it is. Thank you for Jesus who shows me this way and for the Holy Spirit who will make it real. I ask this in the name of the God who is three in one. Amen. 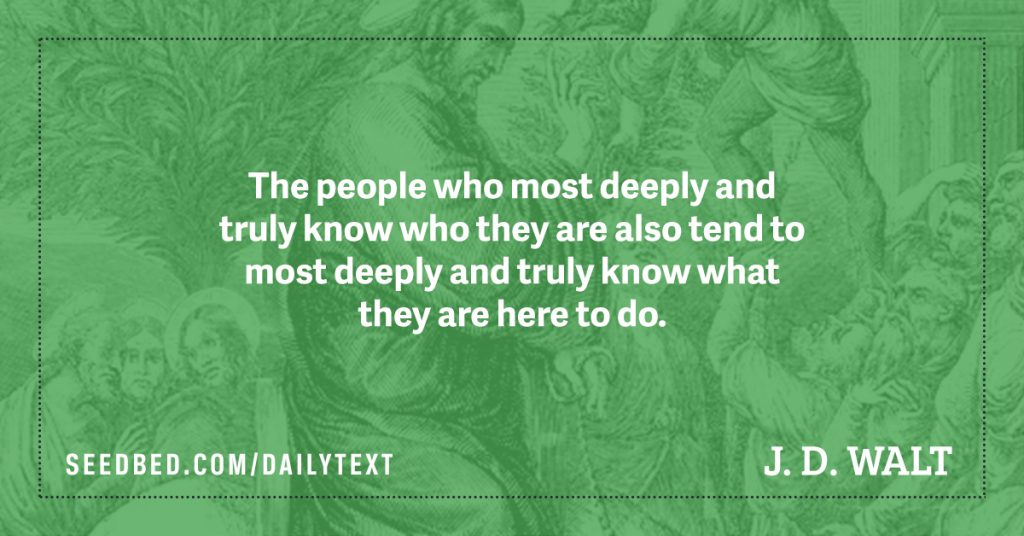 2. Are you seeing the difference between service as an activity and servant as an identity? Reflect on that.

3. Here to serve? How about that? What would that mean for your today?