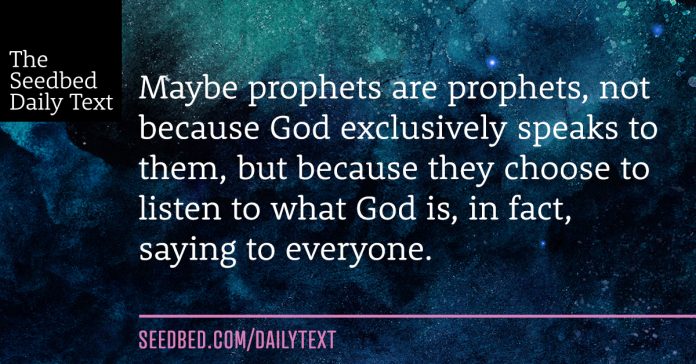 “And the Word became flesh and lived among us, and we have seen his glory, the glory as of a father’s only son, full of grace and truth. John testified to him and cried out, ‘This was he of whom I said, ‘He who comes after me ranks ahead of me because he was before me.’ From his fullness we have all received grace upon grace. The law indeed was given through Moses; grace and truth came through Jesus Christ. No one has ever seen God. It is the only Son, who came from the Father’s heart, who has made him known.”

I’m not sure that we would have much of a philosophy of the Incarnation were it not for the first chapter of John. This idea of God revealing Himself through a human vessel is really quite radical. Our inclination is often to view God as distant; far removed from the intricate details of His creation. The reality of the Incarnation as it is expressed through John speaks a much better word.

St. Athanasius must have had the words of John resonating within his mind when he wrote his classic work on the Incarnation. In my view, Athanasius gives the most profound and concise explanation of the Incarnation when he says, “God became what we are, so that we might become what He is.” This is a simple explication of the Orthodox notion of theosis, which is the process by which we become like God by way of union with Him. We can be made like God in character. Through the experience of union with Him, we can come to love what He loves. His values become our values, and His opinions become our opinions. Jesus shows what it looks like for a human to be perfectly united with The Source; living with God in an unbroken bond of intimacy that cannot help but produce a lifestyle of radical obedience. Shockingly, Jesus invites us into this same reality. He invites us into union. When we surrender to Jesus and become possessed by His Spirit, we too become Incarnations. I believe this is what is implied in 2 Peter 1:4, where we are encouraged to become “partakers of the divine nature.” He became what we are, that we might become what He is. I would add…if we never get around to becoming what He is, then there was really no point in Him becoming what we are.