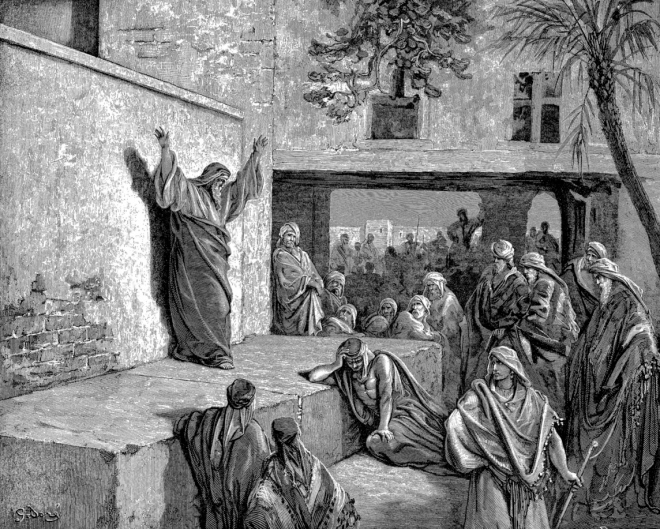 In order to interpret prophetic literature, it is important to first understand what it means to be a prophet. Prophets are commonly mistaken with oracles or clairvoyants, those who have the supernatural ability to see and predict the future. While prophets did at times anticipate and announce the future, prediction was not their primary role in biblical times.

In the Old Testament, God charged specific men and women to bear supernatural messages to His people.  These prophets carried messages calling God’s people back to their roots as the people of God, established by the covenant between Israel and God at Sinai (Exodus 19). At Sinai, Israel was chosen to be God’s special people, a kingdom of priests and a royal nation. As a kingdom of priests, Israel was God’s chosen bridge between God and humanity. As a royal nation, Israel as a collective people would be the embodiment of God’s righteous justice. It was through Israel being a kingdom of priest and a royal nation that God would bring the whole world back to Him. Israel’s part in all of this was to carefully listen to the words of God and obey his commands.

It was not long before Israel began to doubt that God was truly amongst his people. Even while Moses was at Sinai, Israel broke the second commandment not to sculpt any idols to be used in worship (Exodus 32-34). Although some scholars think that Israel also broke the first commandment, not to have any other gods before the LORD, many agree that the text implies that the golden calf was to be used in the worship of the LORD. Rather than seeking another god, Israel was seeking another symbol for God. God had already made it clear that humanity was to be the only image of God on Earth (Genesis 1:26-31), and that anything humanity could make would only profane his image and his name. During this time in Israel’s prehistory, Moses was the chosen Prophet, the spokesperson for God. By making the golden calf, Israel chose to reject Moses as the voice of God and place in his stead a more familiar object of worship, one that they could control. Despite this apostasy, God sent Moses back to Israel with the most profound word in the Old Testament concerning the identity of God: “The LORD is compassionate and gracious, slow to anger and abounding in lovingkindess, showing mercy indefinitely to those who are faithful to Him, yet maintaining justice for sinners and those who relate to them.” (Exodus 34:6-7, Paraphrase).

During the time of the Judges, God sent prophets to govern the people righteously. Prophets went by various names: judges, seers, and prophets. Yet their primary purpose remained the same: deliver a message from God to God’s people bringing them back to their roots so that they could carry out God’s mission of redeeming the world. When Israel decided they wanted a king to rule instead of a prophet (1 Sam 8-12), prophets ceased being the leaders and instead provided a supporting role to the kings. Often times the kings and the prophets did not see eye-to-eye, as few of the kings (mainly David, Hezekiah, and Josiah) acted as the prophetic voice of God and the embodiment of Torah. This cycle of Israel’s history was recorded in Joshua, Judges, Samuel, and Kings, a section of the Hebrew Bible considered the Former Prophets. In most of this prophetic literature, the role of the prophet is forthtelling rather than foretelling. In other words, the primary purpose of the prophet was to bring forth a message from God applicable to his or her immediate context, calling Israel back to the Sinai Covenant for the purpose of enabling her to offer redemption to the world.

Although the primary role of the prophets was this forthtelling, prophets also anticipated and announced a future age of salvation. This increasingly became the case around the time of the exile. Isaiah and Jeremiah, for example, both anticipated judgment in the form of exile for the people of Israel, and warned of the impending decimation of the nation if they did not repent. Although Hezekiah heeded Isaiah’s warning and Josiah followed in his footsteps, revealing the book of Deuteronomy, Jehoiakim (Josiah’s son and Hezekiah’s great-great-grandson) did not listen to Jeremiah’s warnings. The foretold destruction of Jerusalem and the temple occurred because of Jehoiakim and Israel’s unrepentence. Yet amidst destruction and exile, God maintained his promise to show mercy indefinitely to those faithful to him. Part of that faithfulness was the promise of a Messiah who would follow in the lines of Moses, Samuel, David, Hezekiah, and Josiah, reigning righteously by embodying Torah and living amongst Israel as the voice of God.

Prophetic literature is not primarily prediction, and thus it should not be interpreted as being all about Jesus or the end times. Rather, prophetic literature is all about calling humanity to be the people of God on behalf of the redemption of the world. As God incarnate, Jesus was the epitome of what it meant to be a prophet, and thus he could rightfully claim to have fulfilled everything written about Him in the Law and the Prophets (Luke 24:44). Jesus dwelt among us as the embodiment of Torah, speaking the voice of God. Now He reigns as the ultimate Messianic King, calling us, as the people of God, back to our roots—back to Sinai, where we covenant with Him to carefully listen to his voice and obey his commands so that we might be priests in this world, acting as a unified people for the purpose of restoring the Earth to the LORD.

The following books are considered Prophetic Literature. As you prayerfully read through them, consider how God was using the Prophets to call the people of Israel back to the Sinai Covenant during that time. Consider how such books provided hope to an exiled nation that they would one day be returned home under the righteous rule of a Messiah. Consider how they speak to Christians today, calling us back to being priests working to offer God’s redemption to our broken world.