Jesus Is Lord of the Wrestling Heart - Seedbed
close
Menu 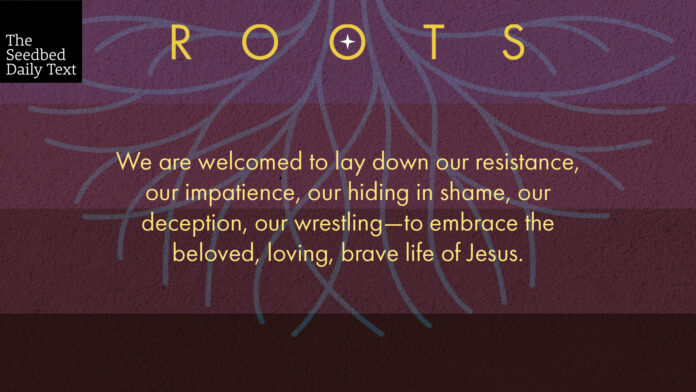 That night Jacob got up and took his two wives, his two female servants and his eleven sons and crossed the ford of the Jabbok. After he had sent them across the stream, he sent over all his possessions. So Jacob was left alone, and a man wrestled with him till daybreak. …Then the man said, “Your name will no longer be Jacob, but Israel, because you have struggled with God and with humans and have overcome.”

Our Advent reflection on the roots of Jesus’ family tree takes us back to the moment in time when his forefather Jacob was first called “Israel”—and an entire people would bear his name for all recorded history.

When I was a young boy, at the prodding of a few friends, I tried the sport of wrestling. Wrestling. Two people get in a ring, and attempt to force the other to physically submit. If there is one word that captures what happens in the ring, it is resistance; the entire sport is built on two people applying resistance, pressure, force, to the other. When one person is pinned to the ground, the bell rings and the match is over. I was pinned often, but I did learn to apply my strength, like Jacob, in the process.

Jacob is mentioned, along with his grandfather Abraham and his father Isaac, in Jesus’ genealogy in Matthew 1:2. Jacob was, by all accounts, a wrestler, a resistor, a pressurer, a forcer—always to get his own way. He was a man in a struggle his entire life. He wrestled with his brother coming out of the womb, and he wrestled a birthright and a blessing from him as well. Jacob psychologically wrestled his father out of a gift that was not intended for him, and he wrestled with his father-in-law over issues of fairness. Jacob knew how to get his way.

Deception. Resistance. Impatience. Struggle. Do these sound like words you would expect to be associated with a man who would not only become the namesake of the myriad people of Abraham, but would also make it into the genealogy of the Messiah? We can all be thankful that the Son of God has broken people who are a part of his family. Sometimes what we overcome is the very sign and signal that God is with us, working all things for the good for those who love him and are called according to his purposes (Rom. 8:28). In overcoming, we become ensigns of Grace.

But why did Jacob struggle, and why do we? Jacob’s greatest opponent, as we read at various points in his story (see Gen. 31:1; 32:7; 32:11), was fear. At the Ford of the Jabbok, Jacob sends his family, herds, and flocks ahead of him. Alone with his fear of facing his brother Esau, he spends the night in a wrestling match with a figure he seems to understand to be God. Jacob will name the place Peniel, which means “face of God,” because he saw God face to face, and yet his life was spared (Gen. 32:30). When the close quarters, life-transforming match is over, Jacob is given the new name, Israel—one who “struggles” with God.

The only remedy for fear, according to 1 John 4:18, is love. Jacob feared because, like us, he struggled with love. He must have found it hard to love himself knowing all he had done. He must have found it hard to love others because he felt so unloved, unfavored, himself. That’s how takers are born. They are always looking to provide something for themselves that only God can give. That night, perhaps, just perhaps, Jacob was ultimately overcome by love—humbled by love. And having met with God in the midst of his deepest fear, overpowering love left him with a limp of humility as a memento of the experience.

Jesus wrestled in a garden called Gethsemane. He, however, knew he was beloved, and could freely love because of that inner solidity and contentment. Our Messiah, knowing in his own family line how fear can corrupt and disorient a soul, steps into our lives and says, as he did to the disciples, “Do not be afraid” (Matt. 14:27). With those words we are welcomed to lay down our resistance, our impatience, our hiding in shame, our deception, our wrestling—to embrace the beloved, loving, brave life of Jesus.

Lord of the Humbled Heart, you know me, and you always have. May my fear be broken by your love, casting it out, day by day, from my heart. Give me the humility that comes from having been overcome by love, and I’ll take any limp that comes with it to remind me of love’s strength for the journey. In Jesus’ name, amen.

How has the love of Jesus met you in your fear, and dissolved its power in your life? Are there areas of fear you are holding onto, right now, that you could surrender to Jesus without resistance?

How I Got My House Back

Formed by the Word, Filled by the Spirit

The Wonderful Way of Immersion in the Word of God

When the Word of God Asks us a Question (Question #1...