Jesus Is the Lamb of God - Seedbed
close
Menu 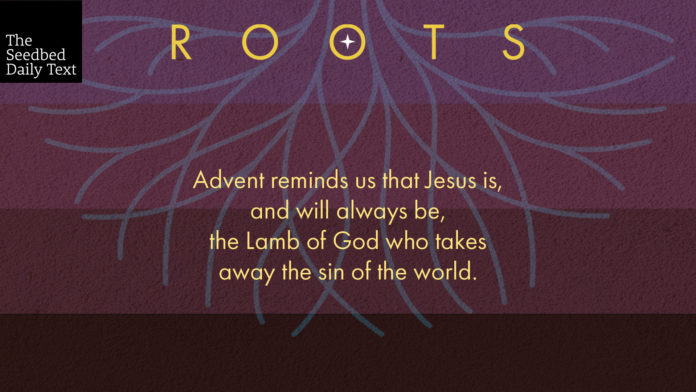 “Obey these instructions as a lasting ordinance for you and your descendants. When you enter the land that the Lord will give you as he promised, observe this ceremony. And when your children ask you, ‘What does this ceremony mean to you?’ then tell them, ‘It is the Passover sacrifice to the Lord, who passed over the houses of the Israelites in Egypt and spared our homes when he struck down the Egyptians.’” Then the people bowed down and worshiped. The Israelites did just what the Lord commanded Moses and Aaron.

The Advent roots of Jesus’ story and the roots of the faith-family of Israel—as well as the roots of the Body of Christ of which we are a part—are nourished by a few striking images from the Old Testament. One of these images is the picture of the sacrificial lamb, sacrificed for the sins of the people of Israel. While we won’t unpack such a powerful and complex image completely, it’s important that we take a few moments this Advent season to reflect on Jesus coming into the world as the Agnus Dei—the Lamb of God.

In the Scriptures, we hear Christ called the “Lamb of God who takes away the sins of the world” (John 1:29). In the ancient Hebrew image of the sacrificial lamb, the Jews would sacrifice a lamb in the Passover celebration, as a life-for-life offering that would cleanse the sin of the nation and remind them of God’s great, life-saving, deliverance of his people from the Egyptians. That sacrifice would cleanse the guilt and sin of the people of Israel as they stumbled to uphold their end of covenant obedience and lovingkindness intended to be shared between themselves and God.

While an image like a sacrificial lamb can feel offensive to our modern sensibilities, it is important that we approach images like this with tremendous historical humility—we are not “better or smarter than they are”—they lived in a time and in a place, in a world that would be very unfamiliar to us today. God speaks in history, in time, to people in ways that are meaningful to them, using powerful images like a sacrificial lamb to show us just how far God will go to win us back, heal us from our sin, and keep us aware that we are in need of a savior who will offer his life in exchange for our own.

Advent is the Father’s action to restore the covenant relationship, broken in the Garden of Eden, between God and humanity, between us and our Creator. By giving his one and only Son (John 3:16), to live, die, and rise to life again among us, the Father was bridging the gap between himself and us, a gap created by our sin and widened through our endless rebellion and misuse of the precious gifts of creation—including one another.

At Christmas, Christ came to us as the Lamb of God. On the cross, he would make the supreme sacrifice for you, for me, for all of the human family. When Jesus was born, one of the gifts given to him by one of the Gentile kings was myrrh, a spice with many uses, one of which was its use as a burial spice (Matt. 2:11; John 19:39). Myrrh is mentioned a few times in Jesus’ story, foreshadowing that he will give his life, as a sacrificial lamb (Rev. 13:8), as a ransom for us all (Mark 10:45). As the song says, “Mary, did you know?” Did you know that Jesus was born to die for us all?

1 Peter 1:18-20 says: “For you know that it was not with perishable things such as silver or gold that you were redeemed from the empty way of life handed down to you from your ancestors, but with the precious blood of Christ, a lamb without blemish or defect. He was chosen before the creation of the world, but was revealed in these last times for your sake.” The Lamb of God was slain for us, a sacrifice that forever breaks the power of sin, brings forgiveness, and triumphs over the powers and authorities of this cruel world, making a spectacle of them on the cross where the Lamb of God suffered and died (Col. 2:13-15).

Advent reminds us that Jesus is, and will always be, the Lamb of God who takes away the sin of the world. We will worship him as the Lamb, forever (Rev. 5:12–13).

Lamb of God, you take away the sin of the world—and my own right along with it. I rise today, clean and cleansed in spirit and conscience, brought into sweet intimacy with you, because you took my sin on your shoulders in your death, and rose to defeat its power forever. Thank you. I worship you, Lamb of God, in this season of Advent. In Jesus’ name, amen.

Have you ever meditated on Jesus as the Lamb of God during the Advent season? If not, take some time to reflect on what it means for Jesus to be the “Lamb of God who takes away the sins of the world”—and how his sacrifice for you has changed your life.