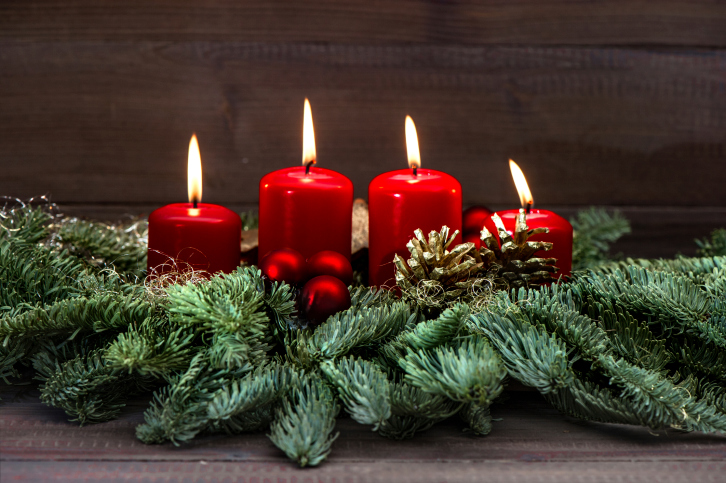 I’m an Advent geek. I love it. I treasure the familiar feelings my faith evokes during this time of year – a deep and abiding sense of hope, expectancy, and joy. I love the preparations – the feeling of my house as I finish decorating at 3 AM with only the quiet sound of Christmas music (Charlie Brown or maybe Ray Charles) playing in the background; the joy of finding just the right gift for someone I love and imagining their face when they open it; the way it smells when John (yes, John) finishes baking Bishop’s Bread.

Despite being one of my favorite times of year, it’s also a difficult time for me because the message of the season always seems out of sync with my experience of the world. There are almost too many disconnects between the Advent season of hope and peace, and our world of violence and heartbreak to mention. I hurt inside every time I scroll my newsfeed.

This internal conflict is not new for me. Every year it seems my heart sings with joy at the same it is breaking with sorrow. That’s because the disconnect isn’t just in my own mind and heart, it’s a foundational contradiction between the Jesus way and the way of the rest of the world – a contradiction and disconnect that’s been around since Jesus came on the scene in the first place.

I suppose that’s the point. It’s the disconnect that caused the prophet Isaiah to promise, “The people who walk in darkness will see a great light. For those who live in a land of deep darkness, a light will shine…For a child is born to us, a son is given to us. The government will rest on his shoulders. And he will be called: Wonderful Counselor, Mighty God, Everlasting Father, Prince of Peace. His government and its peace will never end.”

As Christ followers, in all times and seasons, but especially during Advent and Christmas, we declare to the world that we’ve seen that great light. Yet even as we make that proclamation, we can’t ignore that the world remains in deep darkness – God’s dream for the world remains a far cry from the nightmare that’s the reality in so many places today.

That is why proclaiming the good news of light in the midst of darkness isn’t about sentimental visions of Bethlehem’s deep and dreamless sleep as silent stars go by. It’s about recognizing that Isaiah’s promise of a great light is twofold: not only will a son be born to us, but that son, that Prince of Peace, will be “despised and rejected – a man of sorrows, acquainted with deepest grief.” (Isaiah 53:3)

Isaiah says that we will turn our backs on that Prince of Peace and look the other way. He will be despised but we won’t care. He will carry our weaknesses and our sorrows will weigh him down. He will be pierced for our rebellion and crushed for our sins. Isaiah says that the one on whose shoulders the government will rest – that Prince of Peace – the one whose peace will never end, will be beaten so we can be whole. He will be whipped so we can be healed.

Every December my heart sings with joy and breaks with sorrow because there is never a manger without a cross. The peace that the angels sing about isn’t a peace that can ever come through violence – no matter how “redemptive” we may believe that violence to be; no matter how much we believe we need to “teach our enemies a lesson.”

The peace the angels sing about is a peace that comes through self-giving love. Our Prince of Peace rules a kingdom whose goal isn’t victory on it own terms but peace on God’s terms.

That our Prince of Peace entered the world as a helpless child and left it as a crucified outcast tells me that God’s kingdom is one in which self-giving, vulnerable, love reigns supreme; a kingdom that at it’s very core is a radical repudiation of violence. And that stands in stark contrast to the kingdoms of this world.

Yet that disconnect raises as many questions about ourselves as it does about the world. I do not doubt that the issues that face us are complex, nor am immune to an intense desire to see those who are doing so much harm brought to justice. But do we not mock the One we claim to follow when we fail to offer the merciful, forgiving, healing, redemptive, saving, love of Christ to all people – even our enemies? The witness of persecuted Christians in Nigeria and across the Middle East in contrast to our own shrill rhetoric convicts me of that painful truth.

We’re about midway through this holy-day season, this Advent season of disconnect. Maybe as we proclaim the good news that will bring great joy to all people, we ought also to recall the words of our Prince of Peace, who told us that God blesses peacemakers. Maybe in this season of peace and beyond, we need to ask how might we become more active in our peacemaking?

How might we love rather than hate our enemies?

How might we turn the other cheek, give freely, walk second miles, lower barriers, and come alongside others?

In other words, how might we live more into the likeness of the son whose birth we celebrate?

The questions remain. The disconnect remains. Yet we pray: Your kingdom come, your will be done on earth as it is in heaven.

We pray that light will penetrate darkness, that violence and war will end, that the kingdom of our Prince of Peace – a kingdom of shalom – will indeed come.