On Knowing When to Fold Them - Seedbed
close
Menu 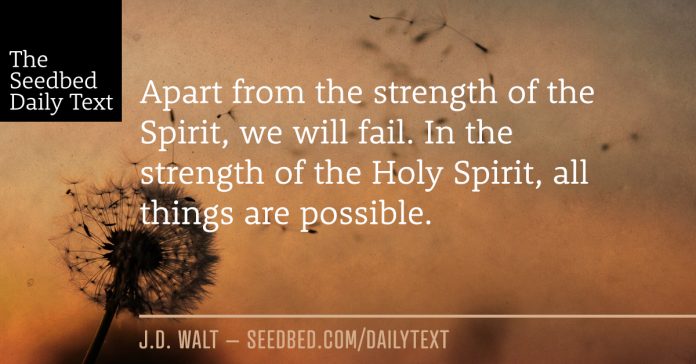 When Silas and Timothy came from Macedonia, Paul devoted himself exclusively to preaching, testifying to the Jews that Jesus was the Messiah. But when they opposed Paul and became abusive, he shook out his clothes in protest and said to them, “Your blood be on your own heads! I am innocent of it. From now on I will go to the Gentiles.”

Then Paul left the synagogue and went next door to the house of Titius Justus, a worshiper of God. Crispus, the synagogue leader, and his entire household believed in the Lord; and many of the Corinthians who heard Paul believed and were baptized.

However, sometimes—maybe even often—we meet up with failure even in the strength of the Holy Spirit.

Let’s take care to keep reminding ourselves this is why we are working our way through the Acts of the Apostles. We need to see a live demonstration of what working in the strength of the Spirit looks like.

Acts and the early Church often gets idyllically summed up as an exploding movement with everybody having progressive dinners with everybody else, along with neighborhood devotions, singing and smores around the campfire every night. You know, the good old days. If we could just get back to that, everything would somehow magically be fine.

It’s tempting to think of the Apostles like we think of a championship major league baseball team where nobody carries their own luggage, stadiums are always packed, and it’s all high fives and autographs.

In reality, it’s far more like Single A baseball with long bus rides, cheap motels, empty ball parks, and a rarefied “call-up” to the next level.

Paul faces a tough decision in today’s text. Do I quit or press through? He had been preaching his heart out week after week to the Jews about Jesus. Not only were they non-responsive to the gospel, they turned abusive toward Paul. Paul finds himself way beyond a “Say something, I’m giving up on you,” moment.

Paul did something we typically look on with great shame and even disdain. At the same time, it may have been one of his more strategic decisions.

He gave up on the Jews. Sure, he would preach in synagogues again and some Jews would be converted, but Paul “crossed the Rubicon” that day in Corinth. He would go after the Gentiles now with an undivided heart.

Sometimes quitting is the only way to win. Quitting is not giving up. It’s changing directions.

How about you? Is it time to quit?  Can you hear Kenny Rogers warming up?

Is it time for you to quit something you haven’t been able to give up on? Does it feel shameful to consider it? Why?