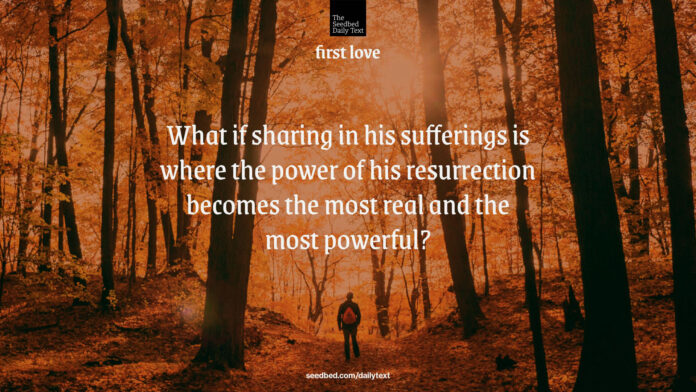 “I want to know Christ and the power of his resurrection and the fellowship of sharing in his sufferings, becoming like him in his death, and so somehow, to attain to the resurrection from the dead” (NIV 1984).

No truer, more poignant, or more aspirationally ambitious words have ever been spoken than these. This is our first love. To this we must return again and again and again. The whole genome of the Christian faith lives in these powerful words.

I want to know Christ. Let those words settle over you.

I want to know Christ. Let them lodge in your deepest heart.

I want to know Christ. This is our first love.

In a wedding ceremony, the first act of worship is the declaration of intent by the bride and the groom. The parties are asked questions something like this these:

Do you take this man/woman to be your lawfully wedded spouse? Will you love him/her, comfort him/her, honor and keep him/her in sickness and in health, and forsaking all others keep only to him/her so long as you both shall live?

This is the kind of intent Jesus looks for in his followers.

I want to know Christ, and the power of his resurrection, and the fellowship of sharing in his sufferings, becoming like him in his death, and so somehow, to attain to the resurrection from the dead.

It can take time to get there, and be even more challenging to stay there, but this is the invitation. So why would we make such a declaration? Only one reason—Jesus has already made this kind of declaration toward us.

I want to know Christ.

If you are anything like me, though, I don’t tend to linger too long there. I am eager to get to the next part of the declaration.

I want to know the power of his resurrection.

But can we just pause and back up a step? We need to do more than linger with those first words. We must make camp there, and not just a temporary retreat kind of camp but a permanent camp. This is our home. First love.

Why is this so important? For starters, because if we ever get past it, we’ve lost it. There is no resurrection power outside of knowing Jesus. It is the fruit of the fellowship. And speaking of fellowship, watch where the text goes.

I want to know the fellowship of sharing in his sufferings.

Keeping it real here, I am not entirely sure I want to know this—the fellowship of sharing in his sufferings. You too? That’s okay. This is a marathon we are running here, not a hundred-yard dash. Let’s back up a couple of steps.

I want to know Christ, and the power of his resurrection . . .

Okay, that’s a bridge too far. But isn’t this the very song Paul sings out in the second chapter of this letter—about having the same mind in us that was in Christ Jesus, who took on the nature of a slave, humbled himself, and became obedient to death, even death on a cross? Yes, Paul actually wants us to sing along with our lives.

This is moving past a declaration of intent and into something akin to vows. “For better or worse, for richer or poorer, in sickness and health, to love and to cherish, till death us do part.” Only this is not till death do us part. Keep tracking.

I want to somehow attain to the resurrection of the dead.

While death is the end of a marriage, it looks to be the beginning of the life hid with Christ in God. The resurrection of the dead was a given for Paul. He said as much in his letter to the Corinthians. If the dead are not raised, then Christ was not raised. Permit me to ponder with you here. The resurrection of the dead was as fixed as the sun in Paul’s understanding. He wasn’t striving to attain that which was a given at the end of time. Paul believed there was an ever-­increasing sense that though he would be raised on the last day, this future reality was available even now—in life—before death. Because Jesus had attained to the resurrection of the dead, in this life, Paul believed it was somehow possible for him—and us—to attain it now. It’s why he wrote things in this letter like, “For to me, to live is Christ and to die is gain” (Phil. 1:21).

It gets richer. Here’s the even deeper mystery. Paul has accelerated his own death, allowing it to become subsumed in the death of Jesus, and thereby abandoning his whole life to him. Consider how he put it in Galatians, “I have been crucified with Christ and I no longer live, but Christ lives in me. The life I now live in the body, I live by faith in the Son of God, who loved me and gave himself for me” (2:20).

And did I mention Paul wrote this letter from his retreat home overlooking the Mediterranean Ocean? No! Paul wrote this from a dank, dark prison cell. From a hopeless, joyless, and loveless place, Paul wrote what has become known as the Epistle of Joy. The one in greatest apparent need of encouragement became the greatest encourager of all time. What was his secret? For Paul there was only ever this: I want to know Christ.

To know Jesus is to know everything else.
The power of his resurrection.
The fellowship of sharing in his sufferings.
The becoming like him in his death.
The somehow to attain to the resurrection from the dead.

It seems right and good to close out this concluding word with perhaps Paul’s greatest benediction, coming on the heels of the powerful declaration of his intention.

Not that I have already obtained all this, or have already arrived at my goal, but I press on to take hold of that for which Christ Jesus took hold of me. Brothers and sisters, I do not consider myself yet to have taken hold of it. But one thing I do: Forgetting what is behind and straining toward what is ahead, I press on toward the goal to win the prize for which God has called me heavenward in Christ Jesus. (Phil. 3:12–14)

Jesus, I belong to you. Amen.