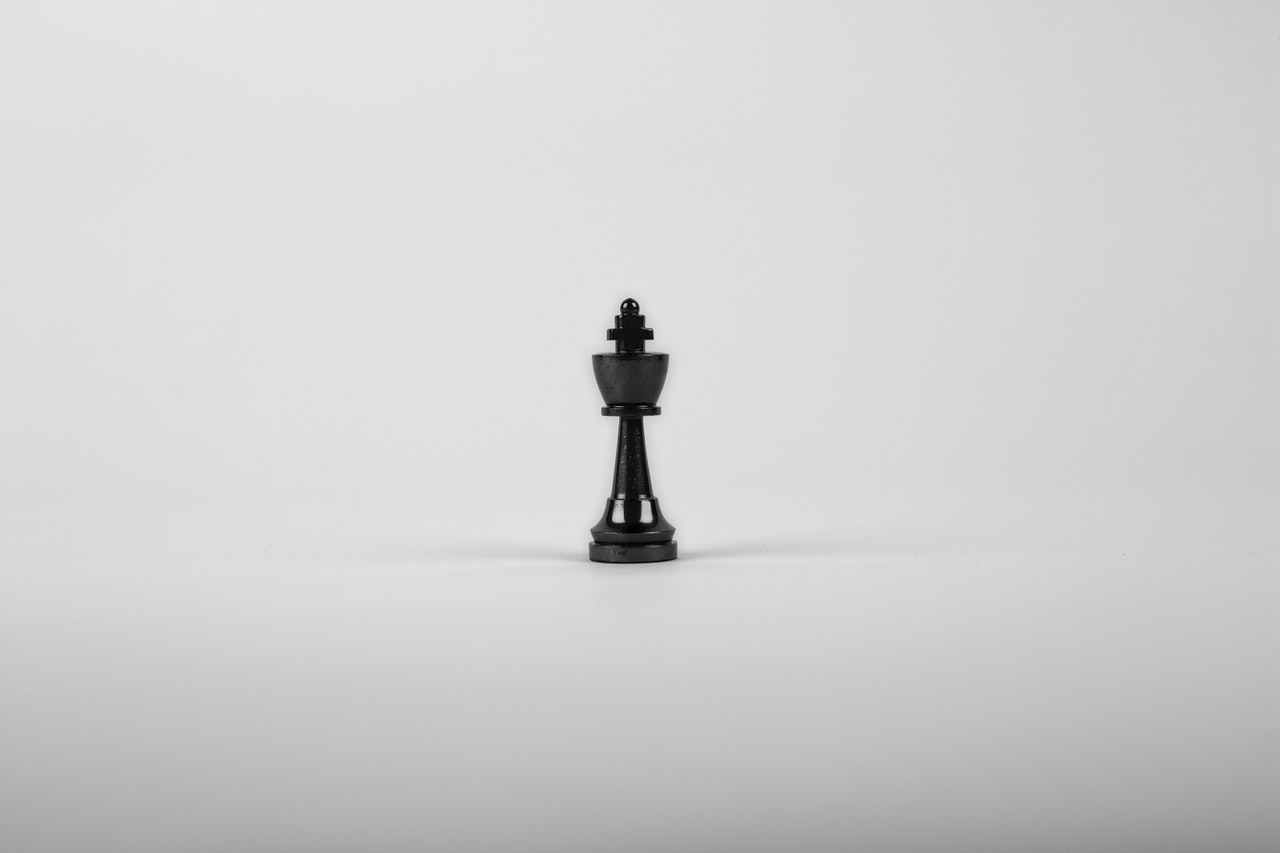 David was the youngest son of Jesse, a runt, a shepherd boy, a nobody really. Apparently, David was so lacking in potential that Jesse didn’t even present him to Samuel, who was to anoint one of Jesse’s sons to be the next king of Israel. David’s own dad didn’t think David had the goods to be king. Few things in life hurt more than having a dad who doesn’t see your potential, who doesn’t think much of you.

However, David’s divine dad highly valued him. God gave David one miraculous victory after another, starting with Goliath and ending with the Ammonites and Arameans. David was divinely promoted from shepherd to king. Everything he did prospered. Everything! This repeated phrase sums up the early days: “the Lord gave David victory wherever he went” (2 Sam. 8:14; 1 Chron. 18:13). David was not a self-made but a God-made man. God picked up this shepherd and turned him into a king. God was determined to bless David.

God favored David, and David adored God. First Samuel 17 highlights David’s youthful zeal. Faced with Goliath-sized challenges, David saw nothing but God. He said to the Philistine giant, “You come against me with sword and spear and javelin, but I come against you in the name of the Lord Almighty . . . whom you have defied. . . . This day the Lord will deliver you into my hands” (vv. 45–46a). David had a one-track mind. He saw past the Goliath-sized problems to the God-sized possibilities. David kept his eyes on the ball, on God, not Goliath. A slumping player once asked the comedic Yogi Berra for hitting advice. Berra said; “If you can see it, hit it.” Thanks, Captain Obvious! David saw God and hit the ball out of the park. He was on a spiritual hitting streak. Red hot!

The problems started when David became king at age thirty. On the mountaintop of success, complacency surfaced. David found himself stuck in a spiritual midlife crisis, a slump. The ardent love for God that marked his youth diminished. In the slump, David discovered that the biggest Goliath he had to overcome was not Goliath, not the Philistines, not King Saul, and not the Ammonites. The biggest Goliath David had to conquer was David; David nearly destroyed David.

King David Slipping into a Slump

Every one of us likely has at least one terrible, horrible, no good, very bad chapter of regret, failure, or humiliation that we’d like to rip out of the story of our lives. I do. For David, the literal chapter is 2 Samuel 11. “At the time when kings go off to war” (v. 1), King David stayed within the palace walls of safe status quo. He was bored in his boxers, channel surfing between his favorite sitcoms. He dragged himself off the sofa and onto the palace rooftop looking for something—anything—to make him feel something—anything—again. He noticed a beautiful woman taking a bubble bath, who was rightly named Bathsheba. One thing led to another, and David invited her to the palace. He slept with her, even though he knew she was married to Uriah, a soldier out fighting David’s battle. Bathsheba became pregnant with David’s baby. In order to keep the adulterous pregnancy a secret, David had Uriah killed on the battlefield.

Talk about slumping degeneration! Boredom to lust to adultery to murder. Sports journalists love to write catchy headlines for slumping players: “Jeter’s Slump Killing Yankees” or “Pujols’ Slump the Most Expensive in MLB History.” At the end of this terrible chapter in David’s story, here is the horrific headline hanging over his head: “The thing David had done displeased the Lord” (v. 27b).

What happened to David between the streak and the slump? What happened between “the Lord gave David victory wherever he went” (2 Sam. 8:14) and “the thing David had done displeased the Lord” (2 Sam. 11:27b)? He backslid. He stopped taking faith-filled risks. He played life safe. David’s military campaigns were sort of vocational for him. That’s how he served God. Military conquest was David’s “spiritual act of worship,” how he rolled with God. Some people pray and preach, but David fought. The fact that he stayed in the Jerusalem palace “at the time when kings go off to war” reveals that midlife boredom was getting the best of him.

How does someone like David, full of fervent love for God, seemingly all of a sudden commit adultery and then murder to cover his tracks? Well, I don’t think it happened all of a sudden. There’s evidence that David’s spiritual slump started long before the rooftop lust of 2 Samuel 11. Five times in David’s story we encounter the phrase, “David inquired of the Lord” (1 Sam. 23:2, 4; 30:8; 2 Sam. 2:1; 21:1). David habitually sought the will of God. David lived like he was deeply dependent on God’s guidance. But in between 2 Samuel 6, the chapter after David is crowned king, and 2 Samuel 11, when David commits adultery and murder, we only encounter the phrase once (see 2 Samuel 2:1). Once David became king, it seems he outgrew his need for God.

Like a baseball player who stops caring, David neglected the disciplines that cultivated his game. He was like the slumping ball player who stops taking batting practice, exercising, and working with his hitting coach. At the peak of his game, when there was more on the line than ever, David let his game go. Now the former spiritual slugger can’t hit the broad side of a barn. He struck out with the bases loaded in the bottom of the ninth inning down by one run. David stopped doing the one thing that got him on a spiritual streak—inquiring of the Lord. David’s degeneration was not initiated by lust, adultery, or murder, but neglect.

You stop inquiring when you stop caring. This is true of any relationship, especially marriage. Couples discover that a lack of inquiry leads to a lack of intimacy. I’m not talking about shallow inquiries like: “Do these pants make me look frumpy?” or “Does my breath stink?” Couples that thrive engage in substantive inquiries like: “How can I love you better?” and “What are worthy goals for our next ten years together?”

When we keep striking out spiritually due to our disobedience, we eventually experience despondence. If you read The Pilgrim’s Progress, John Bunyan’s classic, you might recall the slough of despondency. Despondence can be described with some other nasty “D” words like depression, despair, discouragement, and dejection. It is a loss of hope that things can change. In my research on the baseball slump, I discovered that what often keeps a player stuck is not his mechanics but his despondence, the loss of hope that he can improve his hitting. The same thing is true regarding the spiritual slump. What perpetuates the slump is the belief that we can’t overcome the slump, that we are stuck, that we will never improve our discipleship swing.

Christians who are despondent about overcoming the spiritual slump often embrace a warped view of grace that leads to excusing instead of eradicating sin. We start comparing ourselves favorably to people whose slump seems more despicable than our own. Pride becomes a deadly poison that leads deeper into spiritual degeneration.

David went from streak to slump. Distance led to disobedience to despondence to degeneration. Did David settle for the spiritual slump? Did he conquer it? Or did he end up like one of those washed-up ball players who start strong but quickly fade into the minor leagues or out of the game altogether? What happened to David?

The bad news is he hit rock-bottom. The good news is God found him there. Countless kings after David never overcame their spiritual slump. But David followed God through a process that brought him out of the slump and put him back on a streak again. In my book, Overcoming Spiritual Slump, I explore that transformational process that got David through the slump. For now, know that God will not give up on you even if you have given up on yourself. When you find yourself stuck in a slump, God will find you there. It’s called grace. Disruptive grace is what awakens us from spiritual slumber so that we can begin to thrive again spiritually. 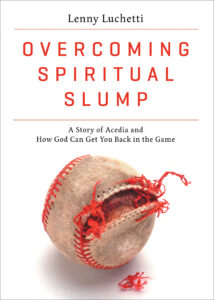 A spiritual slump can deepen not destroy us, if we grab onto the rope of God’s grace and hold on for dear life. It has been said, “the same sun that melts the wax also hardens the clay.” Exploring the life of the Bible’s King David, this book and video series presents a process for overcoming the slump so we reach our potential for a faithful, fruitful, and fulfilled life in Christ.

Get the book + videos from our store here.