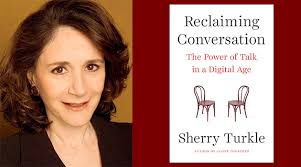 Perhaps you heard them discussing it on the radio: MIT sociologist Sherry Turkle’s new book, Reclaiming Conversation (Penguin, 2015, 436 pp.). The discussion caught my ear because of this quote:

“Studies show that the mere presence of a phone on the table (even a phone turned off) changes what people talk about. If we think we might be interrupted, we keep conversation light, on topics of little controversy or consequence.” In the book Turkle adds with emphasis, “Even a silent phone disconnects us.”

Turkle is not lamenting technology. But she notes how ever-present social media changes us psychologically, sociologically, even neurologically.

I would of course add spiritually, and in relation to building Christian community. More on that in a moment.

Constant use of cellphones and similar devices blocks deep understanding of the other, Turkle shows. Normal empathy withers or doesn’t develop. Turkle cites evidence of a sharp decline in empathy among college students that seems linked to the rise of digital communication.

Digital social media—especially ubiquitous cellphones and constant use of texting and apps—changes our social relationships. “When we have our mobile devices with us, we see that we turn away from our children, romantic partners, and work colleagues.” Although cellphones may helpfully connect us with many absent people, they disconnect us from the people we are actually with. How do you react—perhaps unconsciously—when the person you’re talking with picks up the phone to check messages?

Turkle says cellphones and social media undercut genuine face-to-face community. Research shows that “frequent use of social media leads to feelings of depression and social anxiety” and robs us of empathy toward others. The cure (she insists over and over throughout the book with its many case studies and research reports) is face-to-face conversation.

Turkle quotes Henry David Thoreau—as much a conversationalist as he was a seeker of quiet time alone in nature. “I had three chairs in my house; one for solitude, two for friendship, three for society” (from Walden). This is profound. Turkle organizes her book on the one chair, two chairs, three chairs model. This yields a “Virtuous Circle”—

These three chairs plot the points on a virtuous circle that links conversation to the capacity for empathy and for self-reflection. In solitude we find ourselves; we prepare ourselves to come to conversation with something to say that is authentic, ours. When we are secure in ourselves we are able to listen to other people and rally hear what they have to say. And then in conversation with other people we become better at inner dialogue (p. 10).

This rings true from a Christian perspective. Think of Jesus. Or all the most settled and saintly people you know.

Speaking from a purely from secular perspective, Turkle argues that “Conversation is on the path toward the experience of intimacy, community, and communion. Reclaiming conversation is a step toward reclaiming our most fundamental human values.” Being “silenced by our technologies,” Turkle warns, we in the digitally connected world now experience “a crisis of empathy that has diminished us at home, at work, and in public life.” And “the remedy, most simply, is a talking cure.”

If this is true sociologically, how much more spiritually and ecclesially?

First: Our interaction, our intimacy, with the created order—the earth, what we commonly call nature. Turkle mentions but does not follow up a key point. “Thoreau says that for the most expansive conversations, the deepest ones, he brought his guests out into nature—he calls it his withdrawing room, his ‘best room’” (p. 337). Turkle however goes off a different direction. She writes of “treating machines as people and treating people as machines.” “We want more from technology and less from each other.” The sections dealing with the significance of talking more to machines and less with people are important and prophetic.

But here Turkle’s argument should be linked directly to that of Richard Louv in his groundbreaking book, Last Child in the Woods. Louv talks of the debilitating effects of “nature deficit disorder” as I explained in an earlier blog, “Jesus-Deficit Disorder?”

The messages of the two books—Reclaiming Conversation and Last Child in the Woods—reinforce each other, making a prophetic pair.

Second, Turkle misses the transcendent spiritual dimension. Yet her analysis is full of spiritual significance.

There is no more perfect example of Turkle’s Virtuous Circle than Jesus! Much of his ministry was conversation, and much of that informal and spontaneous. The conversation was in turn enriched by his times of solitude and his public ministry. And much of that was out-of-doors.

Think of Jesus’ many conversations with his disciples. They felt free to interrupt or ask questions, even in the Upper Room discourses. The New Testament encourages Christians to talk together, speak to one another. “Let the word of Christ dwell in you richly; teach and admonish one another in all wisdom; and with gratitude in your hearts sing psalms, hymns, and spiritual songs to God” (Col. 3:16). But New Testament writers also warn repeatedly of gossip.

The church is built through talk—that is, open and constructive conversation—not just through listening. Lively churches know this intuitively, and the Spirit teaches and reminds us.

Truth is: For flourishing according to God’s plan we need open, unstructured, un-technical conversation with each other; unprogrammed interactions with the natural world of skies, earth, water, and creatures; and communion with God in solitude and in the body of Christ.

This leads to wholeness of witness in the world. Like Jesus. The Bible tells me so.