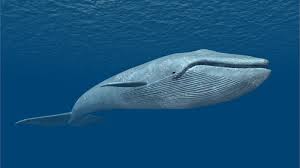 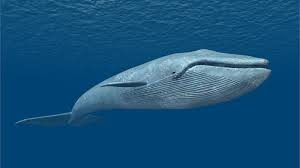 “God created the great sea monsters and every living creature that moves, of every kind, with which the waters swarm” (Gen. 1:21). There is no greater creature on earth—land or sea—than the blue whale.

This is a meditation on whales. I’ve tried to avoid all whale clichés, though that’s a whale of a job. I speak of Jonah only at the end. My comments are prompted by reading Wild Blue: A Natural History of the World’s Largest Animal, by Dan Bortolotti (St. Martin’s Press, 2008, 281 pp.).

The blue whale could be called the king of beasts. It could eat several lions for lunch if it didn’t prefer krill (tiny shrimp-like creatures), and maybe if blue whales had teeth instead of a mouthful of filters called baleen, and if lions took to the ocean. (All those “ifs” are lions’ natural protection from whales.)

“Leviathan” does not mean whale but has long been associated with whales and sea-monster mythology. The term (transliterated from Hebrew) occurs six times in the English Bible (Job, Psalms, Isaiah). It means sea monster or large aquatic animal. The term has often being used metaphorically (as in Thomas Hobbes’ famous 1651 book, Leviathan).
But here we’re talking about real flesh-and-blood whales. So some whale facts and some whale reflections.

1. There are several varieties of whales, but two main kinds: Toothed whales and baleen whales. Sperm whales (as in Moby Dick) have teeth and large squarish heads; blue whales have baleen but no teeth. Instead of teeth baleen whales have long, thin fibers (baleen) through which they strain fish from sea water, expelling the water and then gulping krill by the millions. Baleen fibers consist of material similar to our fingernails. Baleen whales have large, expandable mouths for the purpose of taking in large schools of krill and then forcing out the water.

2. The blue whale is the largest living animal ever, bigger than dinosaurs. Blues are warm-blooded, air-breathing mammals. They mate, and mother whales nurse their young. Females are somewhat larger than males; the reverse is true with sperm whales.
Since whales breathe air, blue whales must surface every half hour or less. It’s amazing to think that these largest of animals who spend most of their lives underwater can actually drown if unable to surface. Blue whales’ body temperature is about the same as that of humans; they keep cozy in cold water with abundant layers of fat (blubber)—the thing that makes them especially prized by whalers, though meat and other products also come from whales.

3. One of the most surprising things about blue whales (unlike others) is the simplicity of their food chain. Blue whales eat krill almost exclusively, which in turn feed on microscopic phytoplankton. Bortolotti notes the remarkable incongruity: “the blue whale owes its great size to an animal that is a couple of inches long.” Here is “one of the most simple and elegant” food chains among earth’s creatures—“the one that goes phytoplankton to krill to blue whale.” As biologist Douglas Chadwick says, “blues are only a couple steps removed from dining directly on sunlight” (Bortolotti, 244).

4. Blue whales live or travel through virtually all the world’s oceans, with four or five main populations inhabiting different regions. Mysteries remain about their travels and migration and communication patterns. Historically the largest concentration has been in Antarctic waters. Blue whales apparently live for more than half a century, though their normal lifespan is still unknown.

5. Blue whales were killed in massive numbers during the heyday of whaling. Other whale varieties were also widely hunted, some to the verge of extinction, but blue whales were (and are) always the biggest prize because of their enormous size and the amount of oil their bodies provide. Bortolotti writes, “One of the great disgraces of 20th–century whaling is that it almost wiped out nature’s largest animal creation before humans had even begun to understand it.”

Bortolotti adds, “The assault on the Antarctic blue whale may have been the greatest war humans have ever waged against an animal.” Blue whales “are so large and elusive that it took whalers a thousand years just to develop the technology needed to kill one, and the systematic hunting of the species required sending vessels and crews to the most remote place on earth. Perhaps most remarkable, the real carnage occurred during an extremely brief and bloody period—the golden age began in 1928 and lasted a mere dozen seasons, during which more than 191,000 Antarctic blue whales died.” Ironically, the disruptions caused by World War II helped save the blues.

Bortolotti notes that in the Southern Ocean (around Antarctica) the destruction of blue whales “was almost complete. In all, about 330,000 were killed during 60-odd years of whaling.” Only an estimated 600 were left in 1963, according to one survey. Tens of thousands were also killed in the North Pacific and in the Atlantic.
Although comparatively rare, the saddest specter of whaling was the (illegal) killing of nursing mothers, leaving the orphaned young to wander and often die alone.

6. Whale vocalization and communication is still largely a mystery, though much is now being learned, and whale calls are being recorded. We know whales call at very low frequencies (mostly too low for the human ear) that can be heard for hundreds or even thousands of miles in dense ocean waters. Clearly a great deal of communication is going on, mostly not yet understood by humans.

7. Though most whales generally, and blue whales specifically, seem to be recovering from the centuries of whaling, they still face serious threats. Bortolotti lists three in particular: Climate change, noise pollution, and growing pressure from some countries to lift the ban on whaling. Climate change is a major growing threat, as is noise pollution. Does the growing volume of noise from ship traffic, sonar, sightseeing boats, and other sources leave blues with the whale equivalent of a throbbing migraine and confuse their communication and navigation? We don’t know.

Here are five eco-theological reflections on the blue whale.

1. God has a covenant with the blue whales. In Genesis 9 God says he is establishing an everlasting “covenant between me and the earth.” This is a covenant between God, Noah and his descendants, and “every living creature of all flesh”; “between God and every living creature of all flesh that is on the earth.” Though not specifically mentioned, clearly whales fall within this covenant.

In Matthew 12:40 the key Greek word is ketos, which in Latin becomes cetos. This is the basis for the current term Cetaceans, a class of animals that includes whales, dolphins, and porpoises. (There are about 90 cetacean species. Hippopotami are thought to be distantly related.)

2. Humans, and Christians in particular, have a stewardship responsibility toward the blue whale. The whole earth and its intricate interconnected ecosystems is part of the “garden” that God intends his people to “tend” and help flourish.
The more we learn about ecology, the more we come to understand that humans flourish best when all earth’s creatures flourish in a healthy interdependent balance. In other words, caring for whales is in our own enlightened self-interest—probably in more ways than we can imagine. (That’s something to discuss with whales if we ever get the chance.)

3. Blue whales are a key part of the complex ecology of God’s good creation, though their precise role remains a mystery. A good deal of blue whale research continues, and more has been learned since Bortolotti’s book was published in 2008. Yet mysteries remain, especially about blues’ migration patterns, vocalizations, and social interaction.

4. The life of blue (and other) whales raises the larger question of animal communication—an area of a considerable current research. It’s remarkable how little we know about the communication of whales as well as birds and other animals.

Humans constantly err, understandably, trying to understand animal communication by analogy with human language and communication. With whales and dolphins, we may need whole different categories of communication and language. There is no question that whales communicate over vast distances. What is much less clear is exactly what they are communicating and to what degree the communication involves an actual language, and with what degree of consciousness. How much of it is music?

This is an interesting question scientifically, but also theologically. Perhaps we will discover much deeper depths to biblical passages that speak of God’s diverse creatures praising him or extending his witness! And in the process, learn much more about how animals of various sorts, particularly the “higher” ones, fit into a mutually dependent, interconnected ecology of life “to the praise of [God’s] glorious grace” (Eph. 1:6) so that we more and more may “live for the praise of his glory” (Eph. 1:12).

In Revelation, the Apostle John on Patmos “heard every creature in heaven and on earth,” including those “in the sea,” singing, “To the one seated on the throne and to the Lamb be blessing and honor and glory and might forever and ever!” (Rev. 5:13).

Might some animals, including blue whales, be “higher” than us in their cognizance of God and in their praising and serving him? Could some of God’s “hosts” be whales? What will we do theologically if we discover that blue whales are communicating at a more sophisticated level of intelligence and consciousness than we ever thought possible? This is plausible, without denying in any way the uniqueness of the image of God in humans.

5. Finally, about Jonah. You have heard that a whale swallowed him, but that the Book of Jonah doesn’t mention a whale. “The Lord provided a large fish to swallow up Jonah; and Jonah was in the belly of the fish three days and three nights” (Jonah 1:17).
I think it was in fact a whale. Preparing a whale to swallow and safeguard Jonah for a few days is a pretty small task for God. There is no reason on that count to consider Jonah a myth. It would be easier to adapt a whale for this special mission than any fish, in any case.

But in the end, the whole question is largely irrelevant. The more important points are the others I have shared.

Dan Bortolotti ends his book, “The blue whale, the largest animal ever to inhabit our planet, owes our species nothing. Humans, on the other hand, who almost destroyed these most marvellous of creatures, are not yet finished paying reparations. We should continue to learn about their lives, and to protect them from the harpoon with our laws. Above all, however, we should leave them in peace.”

Are whales more important than people? No, but that’s the wrong question. In God’s good creation, the truth we must learn is not us versus them; “man against nature”; hierarchies of worth and value. The truth we must learn is that we all need each other in mutual bonds of understanding, sympathy, care, and growing appreciation. For there is “one God and Father of all, who is above all and through all and in all” (Eph. 4:6).

Here is another way the whole earth is full of God’s glory.

Check out this link: https://www.youtube.com/watch?v=WrWvkZjgrSk