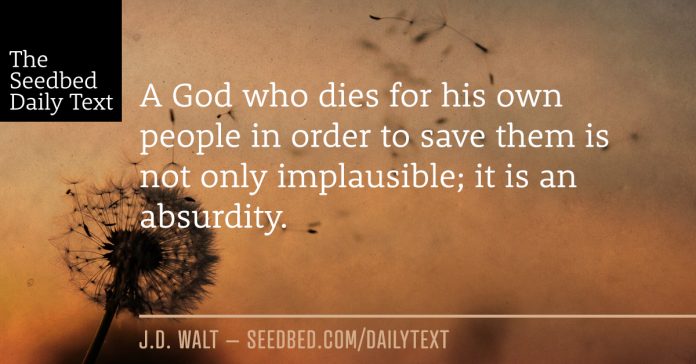 Paul then stood up in the meeting of the Areopagus and said: “People of Athens! I see that in every way you are very religious. For as I walked around and looked carefully at your objects of worship, I even found an altar with this inscription: to an unknown god. So you are ignorant of the very thing you worship—and this is what I am going to proclaim to you.

“The God who made the world and everything in it is the Lord of heaven and earth and does not live in temples built by human hands. And he is not served by human hands, as if he needed anything. Rather, he himself gives everyone life and breath and everything else. From one man he made all the nations, that they should inhabit the whole earth; and he marked out their appointed times in history and the boundaries of their lands. God did this so that they would seek him and perhaps reach out for him and find him, though he is not far from any one of us. ‘For in him we live and move and have our being.’ As some of your own poets have said, ‘We are his offspring.’

“Therefore since we are God’s offspring, we should not think that the divine being is like gold or silver or stone—an image made by human design and skill. In the past God overlooked such ignorance, but now he commands all people everywhere to repent. For he has set a day when he will judge the world with justice by the man he has appointed. He has given proof of this to everyone by raising him from the dead.”

The gospel of Jesus Christ has one limit: plausibility.

The gospel is not plausible and it is a waste of time to try and make it so.

In Athens, Paul seems to be engaging the people at the level of ideas. For years I have heard preachers marvel at the brilliance of Paul’s approach to sharing the gospel with the Athenians. Here’s my question: Does he really share the gospel or has he been lured into the seduction of “smart talk”?

(All the Athenians and the foreigners who lived there spent their time doing nothing but talking about and listening to the latest ideas.) v.21

In that famous plenary address on Mars Hill Paul waxed eloquent. He made object lessons using their idols. He cited their poets. He referenced “God,” but he never named Jesus, referring to him only as “the man.”

We so want the gospel of Jesus Christ to pass the plausibility test, to make perfect sense to present day hearers who are caught up in the ideas of the age (which are ironically just rehashed versions of the old ones).

The gospel is not plausible. A God who dies for his own people in order to save them is not only implausible; it is an absurdity.

This is a good word for all of us, but particularly so for Christians on today’s college campuses.

As we will see tomorrow, the promising “lure” of plausibility doesn’t catch many fish. It may be the most beautiful bait in the tackle box, but that’s probably where it ought to stay.

How much are dealing with outrage over the way things have and are going in your culture or country? Have you lamented the loss or are you spilling your outrage out on others?