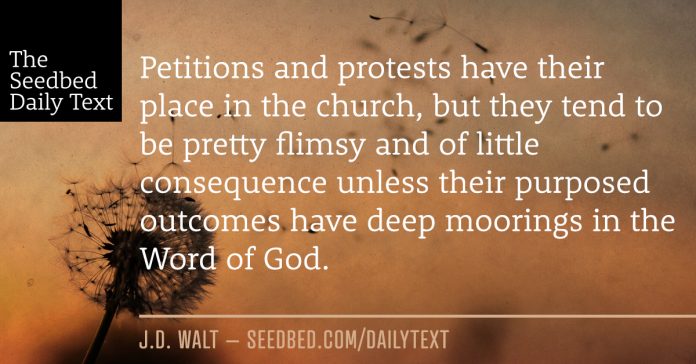 But when the Jews in Thessalonica learned that Paul was preaching the word of God at Berea, some of them went there too, agitating the crowds and stirring them up. The believers immediately sent Paul to the coast, but Silas and Timothy stayed at Berea. Those who escorted Paul brought him to Athens and then left with instructions for Silas and Timothy to join him as soon as possible.

Today’s text reveals a phenomenon as alive today as it was in the first century. It is that of self-assured religious zealots persecuting the church. In short, the Jews heard Paul and Co. moved on to Berea so they took their protest show on the road and followed them. The text tells us they were, “agitating the crowds and stirring them up.”

I’m sure they were well-meaning and considered themselves following God’s will to the letter. Perhaps they felt like Paul and Co. were doing the same thing to them and thereby fighting fire with fire. But let’s remember back to Thessalonica and what Paul and Co. were attempting.

As was his custom, Paul went into the synagogue, and on three Sabbath days he reasoned with them from the Scriptures, explaining and proving that the Messiah had to suffer and rise from the dead. “This Jesus I am proclaiming to you is the Messiah,” he said. (Acts 17:2-3)

Here’s my question: Why weren’t the Jews making their case concerning their understanding of the Word of God—see who has the best reading? I suspect it is because they knew they couldn’t win. They resorted to “other tactics” like protesting in ways that agitated and stirred up the crowds.

It’s not precisely on point, but I see an analogy between what happens between various theological camps in the church today. Some stay pretty close to the Word of God with their persuading and reasoning. Others tend toward “other tactics,” like petitions, protests, and otherwise “agitating the crowds and stirring them up.” I am always left wondering, why can’t we have a bona-fide conversation about the Word of God—see who has the best reading?

Sure, petitions and protests have their place in the church, but they tend to be pretty flimsy and of little consequence unless their purposed outcomes have deep moorings in the Word of God. (i.e. see the Protest-ant Reformation)

It’s interesting to me how Paul and Co. had obviously done some scenario planning along these lines. They went right on with the plan. They shuttled Paul out of of town and on to Athens, (just in case he might have become a distracting lightning rod in it all) and left the work of the Word in Berea with Timothy and Silas.

Because the Word must go on, right?

“The grass withers and the flower fades but the Word of the Lord endures forever.”  Isaiah 40:8

So how about it? Wouldn’t, “the best reading wins” be a better route than all the shenanigans?