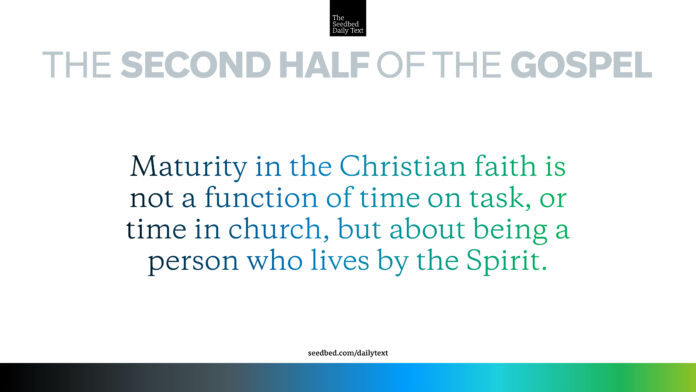 Brothers and sisters, I could not address you as people who live by the Spirit but as people who are still worldly—mere infants in Christ. I gave you milk, not solid food, for you were not yet ready for it. Indeed, you are still not ready.

Paul first calls the Corinthians up. Remember the text from yesterday:

This is now text. It is not a, “when we all get to Heaven” text. It is a right here, right now reality. Note the operative words, “these are the things God has revealed to us by his Spirit.”

Maturity in the Christian faith is not a function of time on task, or time in church, or anything of the sort. Paul describes a mature person as a person who lives by the Spirit. He describes immature Christians as people “who are still worldly.”

Mature Christianity does not necessarily coincide with mature adulthood. I first got this wake up call as a 23 year old law student/youth pastor. There were kids in my youth group who were far more mature in the Spirit than I was. It humbled me and set me on a path I am still on. Many of you reading this are far more mature in the Spirit than I am. But who is comparing? Well, the Corinthians were comparing. Look where Paul goes with his letter:

You are still worldly. For since there is jealousy and quarreling among you, are you not worldly? Are you not acting like mere humans? v.3

This is stunning! “Mere humans.” Paul’s vision of a real Christian transcends humanity. It is not a “super-human” but a supernatural human. It is a human being who has been transcended by the very presence of the Holy Spirit—a human being who is filled with the very presence of God. A bush on fire but not being consumed. I no longer live. Christ lives in me. God doesn’t “use” people. He “possesses” them.

The Corinthians were constantly flashing their spiritual badges at one another about the level of their spiritual maturity. Some things never change do they? Today we call this Facebook and Instagram. Comparison, jealousy, and quarreling is the stuff of the old self and the world.

The truth is, most Daily Text readers are likely not still drinking milk from a bottle. We are vacillating between a protein shake and the meat. I’ll let you work that analogy out from here. ;0)

That’s where we will go tomorrow.

Jesus, I belong to you. You are my Lord and my God. I receive your life in exchange for my life, all of it, right now. I no longer live. You live in me. I have been crucified with Christ. I have been raised with Christ. The old has gone. The new is come. Now what? Come Holy Spirit and lead me into the supernatural human way of Jesus—on Earth as it is in Heaven. Amen.

Where do you find yourself in this mix? Milk? Protein Shake? Meat? Old Self? New Self? Comparing? Be honest with yourself and God, and your band if you have one yet. ;0)