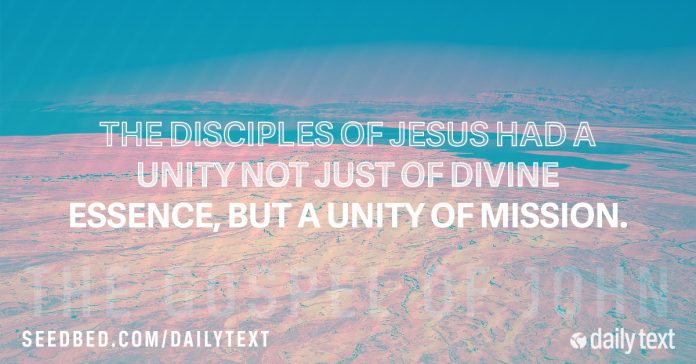 I’m pleased to share the steerage of the Daily Text this week with Dr. Wade Paschal, a long time friend and colleague of mine. Most recently retired from a long tenure of service as the Senior Minister of the First United Methodist Church of Tulsa, Oklahoma, Wade is a pastor-teacher of more than thirty years, a writer and mentor. He is father to three children and grand-father to two. He started as an economics major and went on to do New Testament studies, earning a PhD in Biblical Studies from Cambridge. He served as the founding Dean of the Beeson Center for Biblical Preaching and Leadership at Asbury Theological Seminary, but spent most of his time on the front lines of his downtown church. You will be enriched by his writings this week.

20 “My prayer is not for them alone. I pray also for those who will believe in me through their message, 21 that all of them may be one, Father, just as you are in me and I am in you. May they also be in us so that the world may believe that you have sent me. 22 I have given them the glory that you gave me, that they may be one as we are one— 23 I in them and you in me—so that they may be brought to complete unity. Then the world will know that you sent me and have loved them even as you have loved me.

If Jesus were going to pray for me, what would I ask him to pray for? My health? My family? Would I want prayer for my ministry or for spiritual power?

Jesus did pray for me, but he prayed about none of these things.

Up to this point Jesus has been praying specifically for his disciples with him at the Last Supper. But in verse 20 Jesus pivots and includes those who believe in him through the witness of the disciples. He is praying for the second generation of Christians. He is implicitly praying for me.

And for what does he pray? He prays that we might be “one” just as the Father and the Son are one.

This looks like the world’s greatest unanswered prayer. Drive down a major road in any American city and count the different churches—we’ll find a dozen different denominations, forget about the number of groups within each church that may be at odds with each other.

Before we despair, we can reflect on the fact that it wasn’t very different in the days of the early church. In Acts 6 the early Jerusalem church was divided between those who spoke Aramaic and those who did not. In Acts 15 we see a circumcision party squared off against those who were ready to let circumcision go. Some scholars have suggested that there were no more than forty or fifty people in the whole Corinthian church at the time of Paul’s letters—and they were split into a least four groups.

As soon as the church was the church, the pressures of life and human frailty began to tear us apart.

Our disunity comes from very human concerns. In Acts 6 the new believers—those who did not grow up in Judea—worry that their widows are getting the short end of the stick in the food distribution that the church had for widows. In Acts 15 the circumcision party fret about keeping faith with what they see as foundational traditions in Judaism—circumcision and the food laws. The Corinthians think they are rallying around their beloved leaders.

I’m sure each party felt their concerns were legitimate and their disagreements honest.

Against this Jesus prays that we will find the same unity that the Father and the Son enjoy all the time.

Their unity is not just a unity of divine essence—it is a unity of mission. In John 14:10 Jesus says that his words and his works reflect the fact that the Father lives in him and he in the Father—they are completely one in their mission to love the world.

And by analogy Christians are unified when we focus on sharing the teachings of Christ and the works of Christ.

And what was the result of this unity? Acts 6:7 tells us that many people came to faith—even priests. Think about that last little point. Priests as religious leaders knew firsthand how most conflicts within the community tended to go. When they saw one party give up their power to satisfy the concerns of the other, that said to the priests that there was something different about these Christians. This difference led them to faith in Christ.

Paul said it this way to those divided Corinthians:

14 For the love of Christ controls us, because we have concluded this: that one has died for all, therefore all have died; 15 and he died for all, that those who live might no longer live for themselves but for him who for their sake died and was raised. 2 Corinthians 5:14-15 (ESV)

Holy Father, we thank you for the glory of the cross—that Christ loved us enough to die for us. Through your Holy Spirit, keep this truth alive in our hearts so that we can see the needs of others and care for them. Help us through Christ to learn what it means to be with you and one with other believers, even when we disagree. Amen.