After Jesus had finished instructing his twelve disciples, he went on from there to teach and preach in the towns of Galilee.

2 When John, who was in prison, heard about the deeds of the Messiah, he sent his disciples 3 to ask him, “Are you the one who is to come, or should we expect someone else?”

As we continue our study through Matthew’s Gospel this week we come come to another transition point. Jesus has finished his teaching and training camp for the disciples and now they are scattering throughout the region to put the training into practice. It’s significant to note Jesus also goes out preaching and teaching and healing in the towns of Galilee. It’s significant to note the model here. The leader instructs the flock in a certain course of action and then does it himself. Everything the leader does the flock does also. There is no categorical split between the professional and the non-professional; between clergy and lay. Jesus is “God,” yet he clearly functions as a player-coach (Like Pete Rose sans gambling). ;0)

Beyond the obvious absence of a professional/lay dichotomy this subtle observation exposes at least a couple of inferior approaches many of our churches have adopted when it comes to ministry and mission. On the one hand many churches today still persist in the, “thats what we pay you to do,” approach, where the ministry and mission of the church is largely driven and performed by the preacher and his or her staff where present. In better scenarios they are helped by volunteers and a few key lay leaders, but the preaching, teaching and healing are largely done by the paid professionals. It’s like a coaching staff without a real team but rather a growing group of patrons they try to convert into participants at one level or another.

Another common model we see across today’s church landscape occurs where the preacher  may preach on Sunday and make a few hospital calls (or not) but is more or less absent for the rest of the week. Anything else that happens is up to whoever wants to do it and whatever they want to do. It’s like a loosely formed team without a coach. The challenge in these churches is a few people or families tend to over-own and control the church and many others are left standing on the periphery. In fairness, pastors in these churches are often paid a part time salary and must take other jobs to make ends meet which keeps them from giving the kind of leadership for which they are capable.

After Jesus had finished instructing his twelve disciples, he went on from there to teach and preach in the towns of Galilee.

It’s an early prototype of the New Testament Church. The leader’s role is all at once to be the coach and to be a player. Being a clergy person is far more about being a real player among players than a professional among patrons or participants. There are a few things the clergy person does that other players do not have the authorization to do but that’s about five to ten percent of the work of the church (e.g. administering the sacraments, conducting marriage ceremonies, etc.). The other 95% of the time, the clergy give leadership by preaching, teaching and healing in ways that explicitly and implicitly equip the congregation to go and do likewise.

Many churches and their leaders are working very hard to restore a more New Testament model of church to their local churches. Because of these prominent models (and others not mentioned) it is very difficult. Yes, there are definitely distinctive roles and responsibilities played by the appointed leaders of local churches. Unfortunately these roles and responsibilities have been so professionalized over the years it leaves everyone else in the permanent status of amateur or worse, “volunteer.”  Even worse, the minute someone in the local church shows signs of a strong spiritual pulse the forces of the system begin to route them toward becoming a professional member of the clergy. All of this has led to the maladies and even parodies of church that keep us from “Church.”

I think the real question is this one: In order to be “Church” in the tradition and spirit of Jesus and the Apostles, how can we maintain the key distinctions between clergy and laity while de-emphasizing the dichotomies such distinctions tend to create? I think our language matters. We don’t need to collapse the categories as they hold the capacity to bring great value to the church. We need to change our way of living with the categories by adopting some new metaphors. If Jesus could at the same time be God—and a coach and a player, might it be worth our exploring the same framework for ourselves.

Sorry for going to long today. And yes, tomorrow we will spend our time with the prophet John and his jail house quandary. 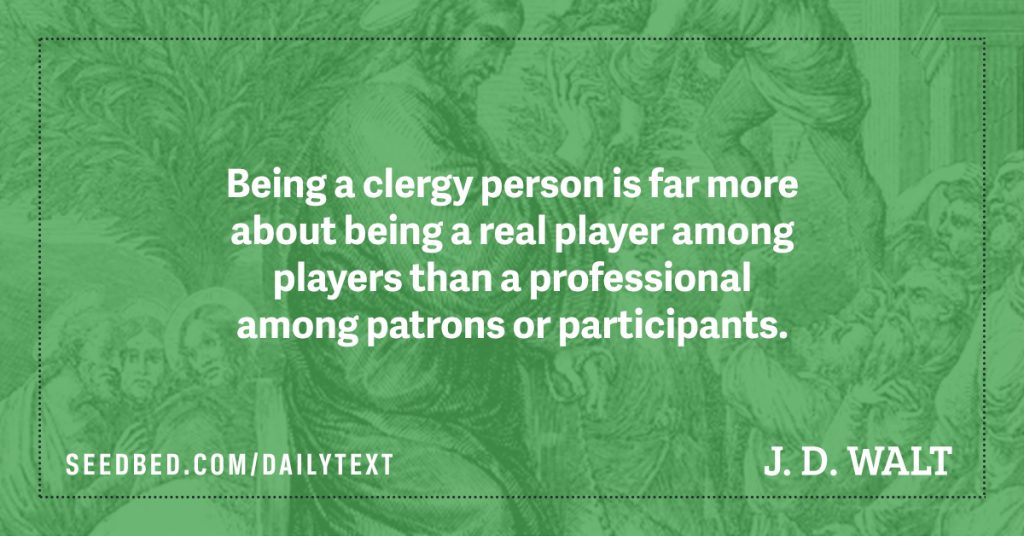 1. How would you describe the model of local church you are a part of or leading? Is there a model you are working off of that is not described?

2. What do you think about this movement away from emphasizing the differences between clergy and lay while maintaining the distinctions through living into some new metaphors and frameworks?  Like for instance, the player-coach model with the leader being a player among players?

3. How do you characterize yourself in the mix. Try this continuum:

Where do you see yourself? Are you ready to move to the next level? What if it means descending instead of ascending?