On the Nature and Necessity of Desperate Faith - Seedbed
close
Menu

18 While he was saying this, a synagogue leader came and knelt before him and said, “My daughter has just died. But come and put your hand on her, and she will live.” 19 Jesus got up and went with him, and so did his disciples.

20 Just then a woman who had been subject to bleeding for twelve years came up behind him and touched the edge of his cloak. 21 She said to herself, “If I only touch his cloak, I will be healed.”

22 Jesus turned and saw her. “Take heart, daughter,” he said, “your faith has healed you.”And the woman was healed at that moment.

23 When Jesus entered the synagogue leader’s house and saw the noisy crowd and people playing pipes, 24 he said, “Go away. The girl is not dead but asleep.” But they laughed at him. 25 After the crowd had been put outside, he went in and took the girl by the hand, and she got up. 26 News of this spread through all that region.

“My daughter has just died.”

Let that sink in. She was twelve.

“My daughter has just died. But come and put your hand on her, and she will live.”

The synagogue leader had obviously heard about Jesus and of his extraordinary authority. I  suspect he had also heard the troubling talking points being circulated by the religious establishment. Who would he believe? He placed his faith in Jesus. Based on what he had heard about who Jesus was and what Jesus had done, he believed in what Jesus could now do. That’s a picture of biblical faith.

Faith is not a quantity of belief nor is it even a quality of belief. Faith has to do with the subject or object of the belief. Faith is not hopefulness in a good outcome. I like how Hebrews 11:1 has it: “Faith is the substance of things hoped for; the evidence of things not seen.” Faith is the substance of hope. Faith does not look forward. It looks back. Faith remembers what has been, and that fuels hope in what could be.

Then there’s that woman who has suffered for twelve years with a condition that kept her perpetually unclean and out of fellowship with the community. She said to herself, “If I only touch his cloak, I will be healed.”

Faith is a fundamental core conviction not in the possibilities of Jesus but in the person of Jesus himself. Faith is not a conditional proposition—as in if you will do this then I will believe. No, faith is a determined desperation—as in I believe therefore I ask and I will believe even if you do not answer. We can’t be certain, but I think this is what these two stories have in common. The man and the woman share a decisive desperation in the person of Jesus—come what may.

I think that’s what he’s looking for in his followers. He’s looking for a tenacity of trust not so much in what he can do but in who he is. Faith is not a transactional exchange. It’s a powerful relationship. 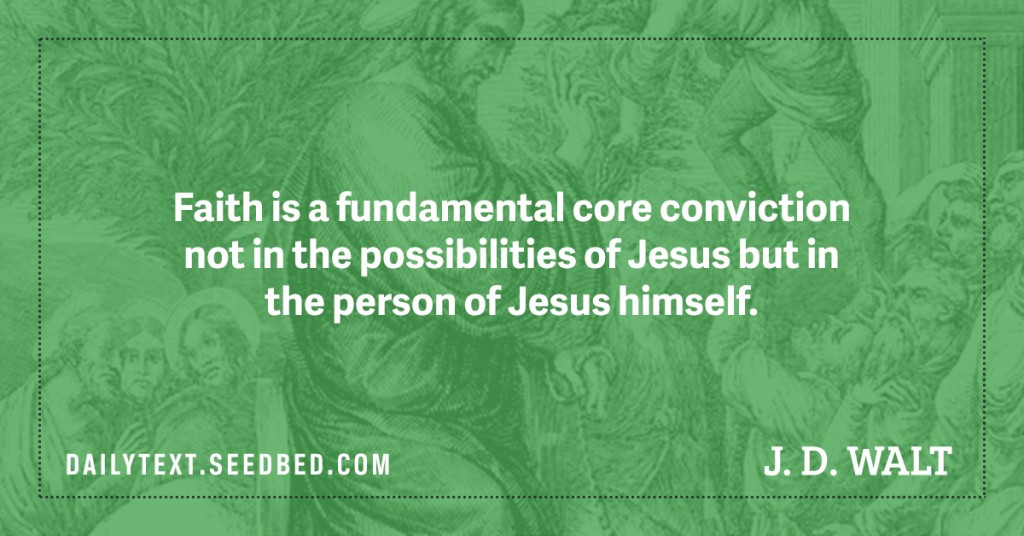 1. How do you resonate with this idea of faith not being so much about what Jesus can do as who Jesus is? Does that challenge you?

2. Could this be why Jesus said if a person has faith the size of a mustard seed they could move mountains? It’s not about the quantity of faith but the person in whom faith is placed. Reflect on that.