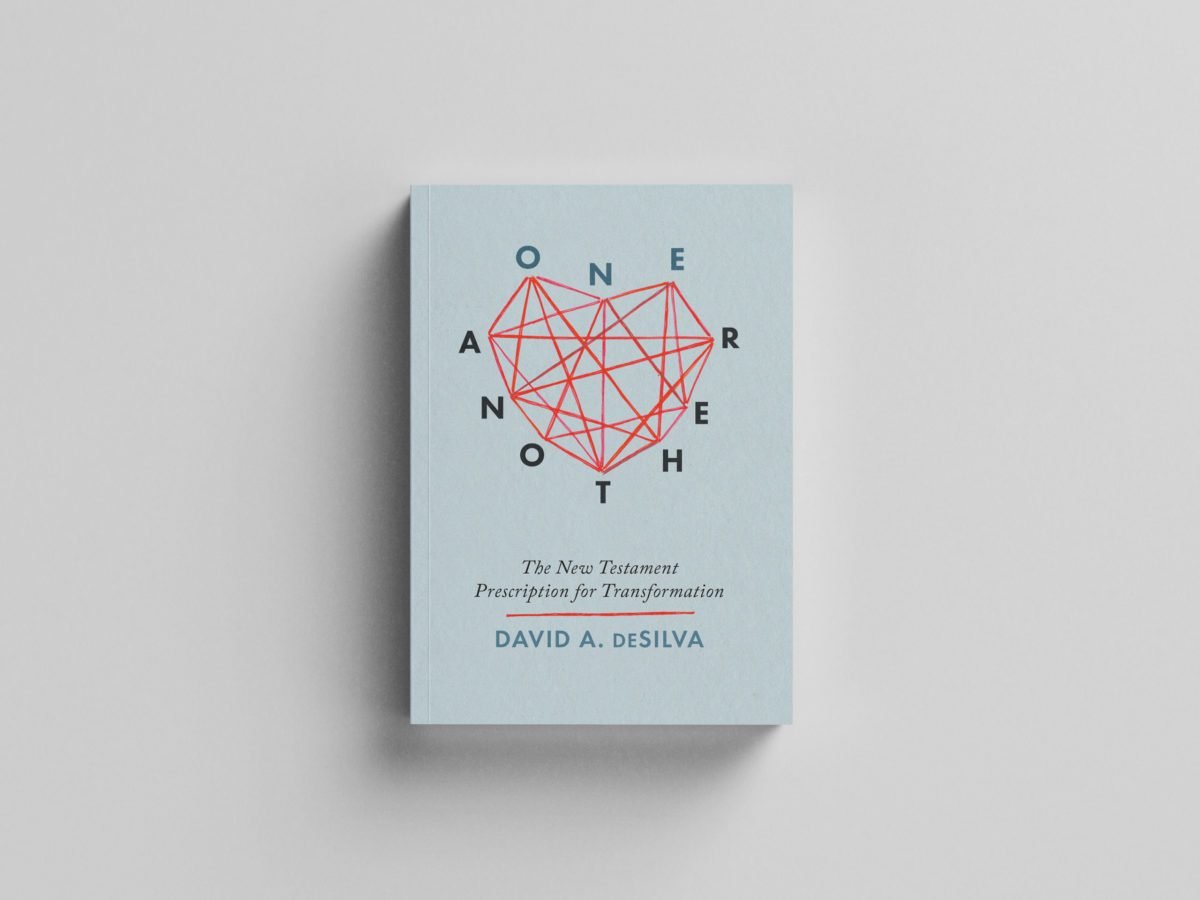 What is the big idea of your new book with Seedbed, One Another, and how do you envision people using this book?

The big idea is that discipleship was never meant to be a matter of individual effort but one that was supported and nurtured in a community of believers in which each member invest himself or herself in each other member’s perseverance on the journey toward holiness.

While it would certainly stimulate the thinking and, potentially, alter the outlook and practice of individuals who read the book, it is ideally read and discussed in small groups—whether groups that already exist within the structure of a particular congregation (like Sunday School classes) or groups that are formed ad hoc for the purpose of this study. It would be more useful to talk with others about the questions raised at intervals throughout each chapter and to explore together how to move forward in the direction of giving one another the many kinds of support that the authors of the New Testament prescribed as the matrix for each believer’s progress towards living a life of consistent obedience and witness.

Why is a resource like this important for the church right now?

Many congregations—particularly those whose members are committed to a scriptural vision for holiness—have been rightly criticized for failures in regard to welcoming sinners and seekers. Many have also displayed failures in regard to a commitment to welcome and love with a view specifically to facilitating each person’s journey along a particular, divinely-instigated trajectory. We might think that the latter applies particularly of the more “progressive” congregations (which it does), but all congregations need to remember that we welcome, love, and support one another in this Christian pilgrimage with a view to moving together towards “that holiness without which no one will see the Lord” (Heb 12:14). Recovering the many dimensions of the New Testament author’s vision for our relationships and responsibilities toward one another will also go far towards addressing our collective failure to live together in a manner that witnesses winsomely to the unchurched and dis-churched and to offer them a place in a community that will truly be a vehicle for experiencing God’s favor, love, and transforming power.

What does transformation through community have to do with the nature of the God whom Christians worship?

I am not sure that I would connect this so much to the “nature of God” per se (though some theologians might point to the intrinsically relational nature of a triune God) as to the historic commitment of God to form a people for himself rather than collect individuals. The first covenant was made with a people and a large portion of its stipulations had to do with nurturing a just and generous ethos among that people in their relationships with one another. The second covenant is also made with a people—all those who are together joined in Christ as one body, one family. We are redeemed by Christ and empowered by the Spirit for transformed relationships with one another, and living out these transformed relationships nurtures our own individual transformation as well.

Why is the temptation for a strictly private relationship so great in the West? How has your study of Jesus’ cultural background helped inform your understanding of how Christians grow spiritually?

I’m not sufficiently well versed in cultural studies of the modern, Western world to answer that first question with any authority. I can only offer my surmises based on being a participant-observer of the same for these fifty-five years.

The first cause would be, I suspect, the highly individualized focus of the gospel we have been preaching, particularly in evangelical circles: Do you (singular) have a personal relationship with Jesus? Have you (singular) invited Jesus to be your (singular) Lord and Savior? These things are important, but they are merely one facet of what “salvation” or Jesus’ intervention in my life is all about. Another central facet, at least for the writers of the New Testament texts, is God’s having joined us together in Christ to be one people together. Think of Ephesians 2:1-22: the first half is arguably about my being “saved by grace” from what I once was to become what God would make of me; the second half is definitely about Christ’s reconciling groups of formerly hostile people—reconciling them to one another as well as to God—together as one body in himself.

The second would be the rampant individualism in our society, whereby I am primarily concerned with and responsible for my own decisions and actions—and where yours are none of my concern nor responsibility, save where they directly impinge upon my own interests. Couple this with the longstanding privatization of religion as something one does not discuss in the workplace or in polite company.

The third might be the safety that comes from thinking of our relationship with God and our “Christian walk” as private matters. My natural preference would likely be to not have other people inquiring into these things, identifying what they believe to be deficits or inconsistencies, and applying pressure on me to change—even if my own goal is ostensibly to yield fully to the change that the Holy Spirit wishes to work within me.

As for my study of the cultural backgrounds of Jesus and his earliest followers and apostles, two contexts were perhaps the most illumining. The first is the community context of the first covenant and its reinforcement. Where anyone’s transgressions against the covenant potentially increase the jeopardy of the whole community’s experiencing the forfeiture of God’s protection and favor, mutual reinforcement of commitment to the covenant is a matter of national security. The second is the ethic of kinship that pervaded both the Greco-Roman and Jewish cultures of the first century and the degree to which New Testament authors sought to nurture precisely this ethic among those who had become sisters and brothers by virtue of their adoption by God in Christ.

Undoubtedly the last one, which is precisely why I saved it for the final session/chapter. Many Christians are uncomfortable with confronting others concerning the practices or decisions they have undertaken – and rightly so, since many Christians likely do not welcome such “interventions” on the part of their sisters and brothers. Nevertheless, the authors whose writings shaped the early Christian movement (and that we receive as foundational and formational as well) called upon their audiences to embrace both facets of this process so that no one might fail to attain the good destiny that God sets before believers (cf. Heb 3:12-13; 12:15-17). I placed this material in the final chapter, of course, since the experiences of being welcomed, loved, served, and encouraged develop the degree of trust required to allow others also to intervene to restore us to secure paths when we are “overtaken in some transgression” (Gal 6:1).

What would the community of God’s people look like if they listened and lived out what they encounter in your work? What would its impact be on the world?

First and foremost, I would hope that our reputation with the unchurched would move back toward what it was in the third century when outsiders looked upon the care and commitment Christians invested in one another, leading them to exclaim: “See how they love one another!” Their experience of too many churches has led too many to observe, to the contrary, “See how they bicker among themselves!” or “See how they hate people not like themselves!”

Second, I would hope that the direction in which our love and support moves each other would foster lives lived ever more closely in line with the teachings of Jesus and his apostles, such that the unchurched would see the sincerity with which we pursue obedience to the One we call “Lord” and the wholeheartedness with which we invest ourselves in making his commandments and his apostles’ vision real in our life together. Again, this would provide counter-evidence against the common charge of hypocrisy leveled against Christians (all too often justly) as the distance between the ideals we mouth and the practices we actually embody betrays our lack of faith that the way of the cross is indeed the way to life and peace. 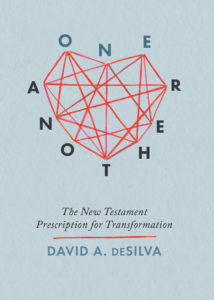 If you’re ready to take community life to the next level, get the foundational study that will lead you into this deeper understanding of the Christian life. One Another by David deSilva paints the New Testament vision for our relationships, interactions, and interventions with one another in a local Christian community. This vision impels us to encourage and support one another, offering reinforcement for holy living that, according to the apostles, we owe one another as the people not only welcomed into relationship with God through Jesus Christ, but given as gifts to one another for this very purpose.

Get One Another: The New Testament Prescription for Transformation book study and videos from our store here.