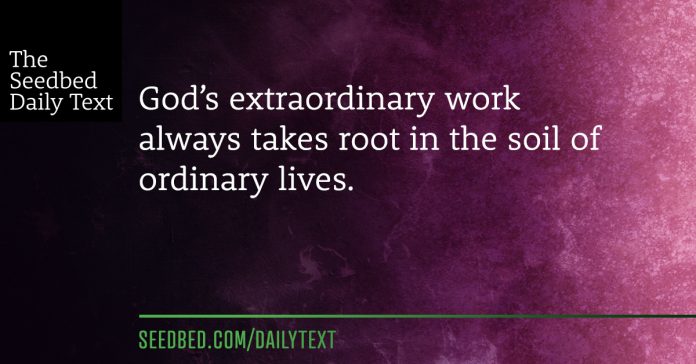 This is how Jesus the Messiah was born. His mother, Mary, was engaged to be married to Joseph. But before the marriage took place, while she was still a virgin, she became pregnant through the power of the Holy Spirit. Joseph, to whom she was engaged, was a righteous man and did not want to disgrace her publicly, so he decided to break the engagement quietly.

As he considered this, an angel of the Lord appeared to him in a dream. “Joseph, son of David,” the angel said, “do not be afraid to take Mary as your wife. For the child within her was conceived by the Holy Spirit. And she will have a son, and you are to name him Jesus, for he will save his people from their sins.”

All of this occurred to fulfill the Lord’s message through his prophet:

“Look! The virgin will conceive a child!
She will give birth to a son,
and they will call him Immanuel,
which means ‘God is with us.’”

When Joseph woke up, he did as the angel of the Lord commanded and took Mary as his wife. But he did not have sexual relations with her until her son was born. And Joseph named him Jesus.

He worked with his hands.

He grew up going to the temple and praying the shema every day:

He had faith in a God who was still alive and who could still speak.

He was willing to lay his whole life down in response to the divine command.

We don’t get to hear Joseph’s internal struggle as he sacrificed his respectable life and embraced an unwed mother’s scandal as his own. We can’t observe the gentle determination in his face or the confident surrender of his voice as he approached a surprised Mary and said to her, “Let’s still get married.”

All we know is that this ordinary, faithful son of David was chosen to raise the beloved Son of God.

He couldn’t give Jesus intricate insight into the Torah.

He couldn’t teach him the complicated politics of the religious elite.

But there was one thing that he could do…

He could model for the Son of God what it looked like to live as a humble human being of faith.

Who better to do this than a simple man who lived his ordinary life as an offering to God?

Joseph represents all of us ordinary people.

He represents those of us who are simply trying to follow God the best we can as we go to work, take care of our kids, and live in relationship with others around us.

Sometimes we think to ourselves, “God can’t possibly be working in my life,” or “there’s no way God would want to speak to me,” or, “there’s nothing special God would have me do.”

Joseph’s experience testifies that we don’t have to be super-people to partner with God in his work.

We just need to be willing, available soil.

Pete Greig says that “prayer is 98% just showing up.”

It’s the same thing in our life with God in general.

Joseph just showed up—and he ended up serving as a father to the Son of God.

I heard a great story recently about an ordinary person who just decided to show up, and her obedience is making an eternal difference.

My pastor was on a ministry trip to Switzerland and met a Syrian lady who lives there. She emigrated to Switzerland a few years ago from Aleppo, Syria. Soon after she moved to Switzerland, she realized that there were a lot of Arabic-speaking immigrants living in her area. As a Christian, she felt called to provide a place where they could gather for community and learn about Jesus. She started hosting gatherings in her home, the first consisting of only a few people. Some years later, she is now the pastor of a sixty-member Arabic-speaking church that meets weekly in an old sanctuary in her city.

She is an ordinary woman who was given an extraordinary dream, and she was simply faithful to show up. God is doing the rest.

It is in the quiet, faithful steps of obedience in the midst of our ordinary days that the Spirit does his work through our lives.

In the end, ordinary obedience is never ordinary at all.

O Father, may I live all of my ordinary moments today for your extraordinary glory.

Everything and Nothing Less by Chris McClarney