Pop Quiz: One of These Things Is Not Like the Others - Seedbed
close
Menu 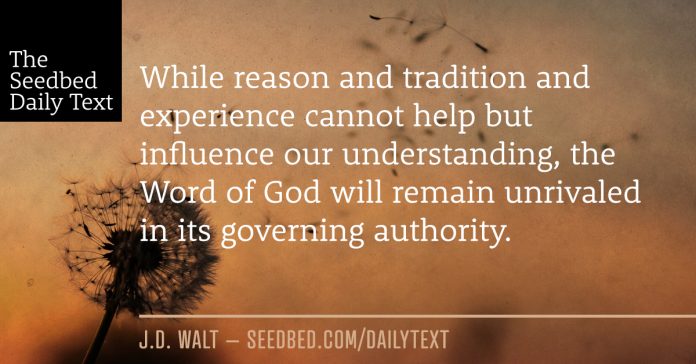 The whole assembly became silent as they listened to Barnabas and Paul telling about the signs and wonders God had done among the Gentiles through them. When they finished, James spoke up. “Brothers,” he said, “listen to me. Simon has described to us how God first intervened to choose a people for his name from the Gentiles. The words of the prophets are in agreement with this, as it is written:“‘After this I will return    and rebuild David’s fallen tent.Its ruins I will rebuild,    and I will restore it,that the rest of mankind may seek the Lord,    even all the Gentiles who bear my name,says the Lord, who does these things’—    things known from long ago.“It is my judgment, therefore, that we should not make it difficult for the Gentiles who are turning to God. Instead we should write to them, telling them to abstain from food polluted by idols, from sexual immorality, from the meat of strangled animals and from blood. For the law of Moses has been preached in every city from the earliest times and is read in the synagogues on every Sabbath.”

POP QUIZ: One of these things is not like the others.

Now on with class today. It has been said one can use the Bible to justify virtually anything under the sun. To an extent I suppose this is possible in many cases. History offers ample evidence of the misappropriation of Scripture to justify such things as slavery and the oppression of women. We will do well to always remember Jesus’ encounter with Satan in the wilderness when it became apparent that Satan also read and interpreted Scripture.

The Bible must be handled with great care and extreme humility. Yes, there is a sense in which anyone can read it and understand its basic message; however, in many cases it can be exceedingly complex and difficult to understand. The church has a long, tested, and trusted understanding of the Bible. We generally refer to this as “orthodoxy.” Through the centuries, orthodoxy has met many fierce challenges. At times it has taken centuries to resolve.

The Church is in the throes of another such controversy. On the surface, the controversy seems to be about human sexuality and gender. The bigger issue at stake; however, comes with how the Bible is read, understood, and appropriated. It is beyond the scope of a post like this to delve into the complexities at hand. I will offer this counsel. Many new and at times novel readings of Scripture will emerge in support of changing what the church has always held to be orthodoxy. Some of these readings will seem plausible on the face of them. Other readings and ways of reading will feel like an exercise in biblical gymnastics to get there. Predictable appeals will be made to the analogies of the bible and slavery and the oppression of women as though they were on point in the present scenario. Be on your guard.

This movement for change will be sincerely advanced in the name of love; however, it moves with the force of power according to the zeitgeist of the present age. It will become painfully untenable to disagree with the forces at work for change. The rhetoric of being on the right or wrong side of history will get loud. While you may be sympathetic or open to the voices for change, be exceedingly careful before signing on the dotted line of the petition to set aside well over twenty centuries of the considered judgment and teaching of the people of God.

So why do I bring this up today? Because Acts 15 will undoubtedly be appealed to as setting an early precedent for departing from the established orthodoxy of the people of God. Look more closely though and you see James making an appeal to interpret Scripture by Scripture. Notice how he cites the prophets’ explicit words concerning the inclusion of the Gentiles in the Church. For a people of One Book, Scripture must be interpreted primarily by Scripture.

The church is being asked and in places led to place Scripture on par with and interpreted according to human reason and by human experience. As for me and my house, the Bible will stand in a category of its own. While reason and tradition and experience cannot help but influence our understanding, the Word of God will remain unrivaled in its governing authority. We will remain wide open to be corrected or rebuked by Scripture and even to be proven wrong in our understanding of Scripture but only in the clear light of Scripture. This is not about being right. Trust me, it would be far easier to just be proven wrong. This is about holy love—for God, his Word, and his people.

POP QUIZ: One of these things is not like the others:

Will you take a humble and grace-filled stand on the Word of God, come what may, or will you cave to societal pressures and find your place on the cultural adoption curve?